The doors open, Edmonton has a stunning new theatre … and Theatre Network is home: The Roxy 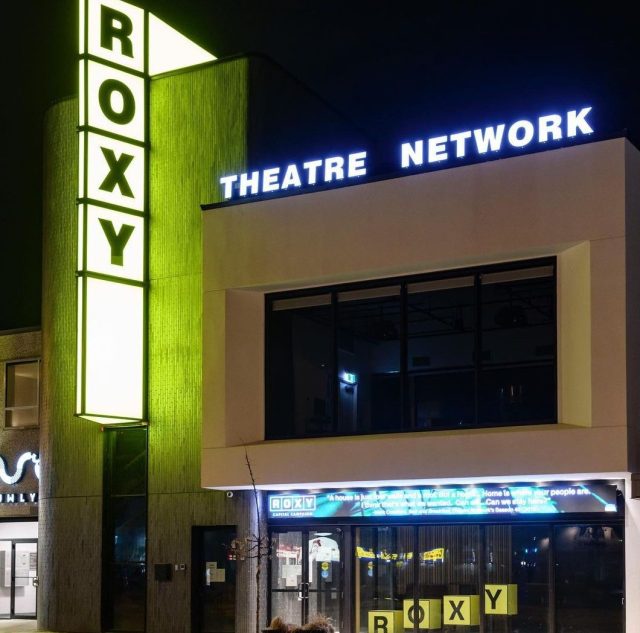 When Theatre Network opens the doors of the new Roxy on 124th St. this weekend, Edmonton will have a beautiful new $12 million theatre.

Theatre Network has returned to the ‘hood after six years renting in Old Strathcona. It’s in a new theatre built on the ashes of the old. And they’ve gone through fire to get here. The new Roxy has risen from the ground up on the footprint of the old Roxy, seven years after a devastating fire destroyed Theatre Network’s vintage deco 1938 ex-cinema home.

For all of us who spent many nights a year at the old Roxy, cramped and fun as it was (I’m definitely not referring to the ladies’ bathroom) — or squished out of the lobby at intermission into the crack between buildings — the sheer spatial improbability of it all is mind-blowing.

A new Roxy has arisen on that very same narrow street-front lot of the old one. And somehow, magically, it houses not one but two performance spaces each with a lobby, an art gallery, an above-ground light-filled rehearsal hall, two bars (one a street-level will-call), offices that include a day-time box office, a carpentry shop and wardrobe, green room, rooftop deck. More on the theatre-goers’ deluxe bathroom later.

I was lucky to get a peek early this past week at the building, the work of Group2 Architecture and Interior Design and Chandos Construction. You can see it for yourself at Theatre Network’s house-warming Friday or Saturday (free tickets at theatrenetwork.ca). Later this month (April 26 to May 15), a production of Cliff Cardinal’s As You Like It, A Radical Retelling from Toronto’s Crow’s Theatre will happen on the 200-seat Nancy Power mainstage theatre (tickets at theatrenetwork.ca).

Nextfest, the multi-disciplinary festival of emerging artists, explodes in every performance space, nook and cranny in the building in June. Theatre Network is planning a summer theatre school there. Then, in August, the Roxy is a Fringe BYOV. Artistic director Bradley Moss himself will direct a Fringe show, his first in the new Roxy, in the adaptable black box theatre named in honour of theatre artist Lorne Cardinal, star of many a Theatre Network production. 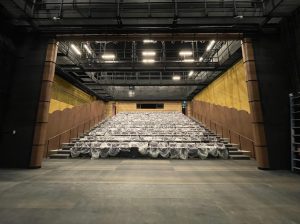 The Nancy Power Theatre in the new Roxy, from the stage during construction, Theatre Network.

Tuesday morning the crew, led by production manager Scott Peters, had just taken the plastic off the seats in “the Nancy,” as the staff affectionately call the elegant proscenium theatre, named for the late board member and sometime president who donated the building to the theatre in 1989. “It hearkens back to the old space,” says Moss of the colour scheme in the “totally gorgeous” proscenium house, with its modern purple seating (with cup-holders!) and mustard-coloured, scalloped acoustic panels. “In a new way we wanted to capture all that history.”

The 27-foot height to the lighting grid — the old Roxy height was 14 feet — expands the artistic possibilities upward on the stage, and downward too (it now includes a trap door). Look up and there’s a mezzanine gallery, for overflow or theatre-goers with disabilities who can choose placement either there or the moveable front row on the floor. Yes, there’s an elevator.

The blacks, the light-absorbing drapery surrounding the stage, had just arrived on the morning I was there. The top-drawer lighting board was in the booth. But the dimmers and other technical connectors have been held up by the same global supply chain issues with chips that have affected the car and computer industries. So there are temporary loans for the moment.

The Lorne Cardinal Theatre, under construction in the new Roxy, photo by Theatre Network.

The Lorne Cardinal Theatre on the lower level is the flexible black box theatre, “a room made to do whatever you want,” as Moss puts it. The capacity depends on the configuration — a variable that includes a gallery with removable panels — but he guess-timates it at 80 or 90.

There’s a heavy retractable wall (Scott Peters’ idea) that opens the space, for cabarets and art installations, to a bar and lobby. “I imagine it closed at night, opening up for party mode,” says Moss, with Nextfest’s signature “performance nite clubs” on his mind. And the space includes a compellingly abstracted portrait of Cardinal by Jason Carter, a special occasion departure for an artist who almost never works in portraiture.

The artists’ quarters are on the lower level. The green room has a kitchen named after the late great chef and theatre-lover Gail Hall. The production office is named after the beloved late stage manager Cheryl Millikin. And the two handsome dressing rooms include bathrooms, one with a shower (Moss was its debut user).

Which brings me to two features without which the live theatre cannot flourish. One is the public bathroom. The new Roxy’s primary bathroom is, unlike its predecessors, an attractive destination venue: spacious, airy, all-gender, with a double-bank of multi-coloured cubicles, retro tiles, deco oval mirrors. “We wanted to give some love to the old building,” says Moss. If you ever visited a Theatre Network bathroom, either at the Roxy or (worse) the theatre’s pre-1989 crumbling ex-Kingdom Hall dive near the Coliseum, you will understand the major socio-cultural impact of this reveal.

The other notable feature, pointed out proudly by Peters and Moss, is the walk-in beer fridge (the liquor license, finalized Tuesday afternoon, “is the last piece of the puzzle,” as Moss puts it).

Managing director Harley Morison points out the rarity of a new theatre anywhere built with a store-front facade on a standard commercial lot between buildings on a busy street in a bona fide neighbourhood. And since the facade is basically glass, the theatre looks outward in the world. “A miracle building,” Morison says. “The basic concept is connection to the street.”

When you open the street-level door at the Roxy, you’re in an art-filled space. The box office/will-call is at one end of a curved bar (with glass glasses). And you’re in the Miller Art Gallery, currently featuring an exhibit of Carter’s strikingly colourful animal paintings.

Upstairs, outside the glass-walled administrative office, there are more Carters, a series called The Wild Party, which starts at one end with a single bear in a canoe. In each painting the bear picks up an extra guest for the ride, starting with a moose and ending with a rabbit all crowded together in the canoe for the festive grand finale painting. It’s hung permanently in the office, and it’s impossible to see the appealing series and not think of theatre gathering its friends. 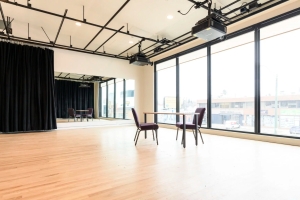 The office is accessible to the rehearsal hall, full of light, that gives on the street. And it’s a beaut. “My whole career has been in shitty rehearsal basements with no light,” sighs Moss. “Our whole (theatre) generation grew up in the dark.” A cabaret artist visiting the theatre last week burst into tears when she saw it, he reports.

The double-sided blinds are also screens,  so they can be used for digital art pieces.  Or in rehearsal “we can actually see video and play with it while we’re practising,” says Moss.

At Morison’s suggestion the Roxy Performance Series, indie productions curated and supported by Theatre Network, is now the Phoenix Series, an allusion to the 1997 union of the company with Phoenix Theatre in 1997. The mantra “live at the Roxy”? Gone. “Everything’s live at the Roxy,” says Moss.

You can’t just rent Theatre Network. The rental system diminishes a theatre’s brand, and happens “on the backs of artists,” Moss argues. Instead, he favours a more-collaborative model, a box-office split with smaller companies whose shows are curated for the Phoenix series.

Moss, Peters, Morison and the rest of the Network crew still can’t quite believe the new Roxy has happened. “Our hearts were broken,” says artistic director Bradley Moss of the terrible night of Jan. 13, 2015. From a vantage point across the street he and the staff watched in horror as the theatre burned. Wouldn’t it have crossed their minds to just stay put in rental digs across the river in the Gateway Blvd. theatre once occupied by Catalyst? “Nope,” says Moss. “Nope,” says Morison. “We had a board meeting the night of the fire. And all of us wanted to rebuild here.”

Years of strategizing, fund-raising, grant applications, followed — and more recently meetings with consultants, fire inspectors (the new fire curtain is a wall of water, as per code), electrical companies, theatrical suppliers…. In the last two years they’ve heard the terms “industry standard” and “code” more times than you’ve had hot dinners. And yet the original vision has remained undimmed.

“Thrilled? Yes! And relieved,” says Moss. “It’s so nice to put the Roxy back. Edmonton gets to keep this — and Edmonton deserves it!”