More about folly than love: A Midsummer Night’s Dream brings Freewill Shakespeare back to the park. A review

After two years of wandering the town in small-cast entertainments, the Freewill Shakespeare Festival is back on the big stage in Hawrelak Park. And on Tuesday’s blustery, unremittingly soggy preview night of A Midsummer Night’s Dream, the first of this summer’s alternating Shakespeares, capricious Mother Nature, who always gets an “ambience director” credit in Freewill productions, seemed to have screwed up her cues. You mean, it wasn’t going to be The Tempest? Or maybe Macbeth? Or the shipwreck in Twelfth Night?

But that’s the fun, and the challenge, of outdoor Shakespeare on a summer’s eve in Edmonton. Sometimes the counter-intuitive impulses are bright sunshine instead of fog on the ghost of Hamlet’s father; sometimes it buckets down on the big festive marriage party at the end of As You Like It.

You wouldn’t call Dave Horak’s kooky, high-spirited, aerobic production of Shakespeare’s early and most popular comedy — a web of romantic miscues and entanglements woven into no fewer than four plots in intersecting worlds — dreamy, or even Dream-y, exactly. It’s set in a world that’s gone somehow askew.

Alison Yanota’s set is all wonky angles, brick-faced doorways and bright-coloured panels, a mash-up of the vertical and horizontal, the aftermath of some sort of earthquake perhaps, set down in the park. In a play where Wall is actually a character (later on in the play-within-the-play), one wall has a road with a yellow line going straight up, with a vertically placed manhole cover like a porthole, and a green compost bin sticking out. Characters appear and exit from it, along with lawn chairs, “magic” wands, and assorted props.

Have we perhaps, like a collective Alice, tumbled down the manhole into a world where Titania the fairy queen (Nadien Chu) talks about Nature in chaos, “the whistling wind,” “contagious fogs,” flooding rivers, the altering of seasons? O, wait….

Anyhow, there’s no “bank where the wild thyme blows,” as per fairy king (Ian Leung) Oberon’s idyllic vision. But there is a park, very visible, surrounding us. And as Yanota’s very odd assortment of costumes suggest, the play’s urbanite humans seem to be sprouting. The courtiers, led by Duke Theseus (Leung) and his captive bride Hippolyta (Chu) are growing leaves on their heads, flowers studding their their lapels, branches entwining their cloaks and jackets. Ditto the quartet of Athenian lovers (Freewill newcomers all). The guys, Lysander (Vincent Forcier) and Demetrius (Moses Kouyate), have outsized collars where flowers have popped up. The gals, Hermia (Kijo Eunice Gatama) and Helena (Brett Dahl), are flower shops on legs.

The fairies are kitted out as the kind of party people who improvise vintage from thrift shops. Puck (Meegan Sweet), the “merry wanderer of the night” and instigator of the romantic mismatching, looks like a dealer in a Vegas casino. And in Horak’s production, fairy magic is deliberately and amusingly low-tech — human you might say. 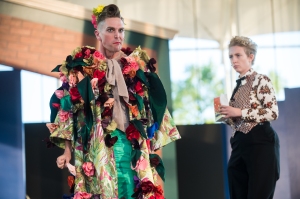 That’s one of the hallmarks of this version of Dream. It’s a romantic comedy that’s more about the nature of human absurdity than the nature of love. The lover plot — four young people ricocheting furiously through the woods ending up with the wrong person and in pursuit of the right person (or vice versa) — is set in motion when a father (Troy O’Donnell as Edges) invokes Athenian law to insist his daughter Hermia (Gatama) either renounce the man she loves (Forcier as Lysander) and marry Demetrius (Kouyate) the man he’s chosen for her — or else die or become a nun, either of which would be a real drag.

Meanwhile Helena (Dahl) has the hots for Demetrius and … but heck, you probably won’t care who ends up with whom. Chemistry isn’t involved. And there is no quiz next period. Andrés Moreno’s pre-show Thou Art Here puppet version of Dream gets a kick out of the plot complications in a little tent at the top of the grassy hill.

Humans in love, as Horak’s 15-actor production tells us, are figures of fun, ridiculously overheated, indistinguishable, and on short fuses. Kouyate and Forcier play Demetrius and Lysander as grotesques with no anger-management filters. Forcier, especially, has a streak of the smart-ass sardonic about him, Gatama and Dahl, who translate girly friendship and lovestruck intensity into high-kicking choreographed brawling when crossed (fight direction Anastasia St. Amand, choreography Amber Borotsik). Deep-voiced Dahl gets lots of laughs for Helena’s high-dudgeon outrage at offences against maidenly propriety.

No wonder Puck is amused, in a detached way, by their dopey antics. Oberon’s fairy fixer is a veritable repository of malicious amusement in Sweet’s original performance. Puck has been at the human circus too long and is a tad jaded. Leung and Chu preside over this world with regal charm, and command the lyrical verse with authority.

As always in Dream, it’s the “hempen homespuns,” the “rude mechanicals,” who tend to steal the show (Matthew Skopyk’s appealing original score adds tuba parts whenever they’re onstage). They’re theatre people wannabes in workers’ construction jackets—  especially Nick (here, Nicky) Bottom the Weaver, a bossy histrionic stage-struck amateur who magnanimously offers to play all the lead roles. Ruth Alexander, equipped with a Scottish accent you could cut a haggis on, is a hoot.

Their earnest rehearsals for Pyramus and Thisbe, as beleaguered stage manager Peter Quince (Sarah Gale) divvies up the parts, are amusing and even a bit touching in their generosity for fellow talents. It is, in the terms of a later age, a collective creation with amusing audience trigger warnings — all Bottom-ed out by star power.  You do hope they won’t be  reviewed too harshly by the courtiers when they put on their show.

And when, as an instrument of Oberon’s revenge against his wife, Bottom is magically endowed with an ass’s head and Titania falls in love with him, Bottom effortlessly insinuates himself into the fairy world. And he brings his native bossiness with him.

It all starts and ends in dancing. Like Pyramus and Thisbe with its prologue, this Midsummer Night’s Dream gets a prologue too — fairy speeches borrowed from Act II. It’s all, Puck says, about mirth and merriment. And, at the moment in our own world, those are words to live by.

Written by: you know who

Running: through July 10, even dates and most matinées, alternating with Measure For Measure odd dates and July 10 matinée.

Tickets: freewillshakespeare.com or at the gate