The Cirque du Soleil is back and the joint is bugged: OVO, a review

At the outset, a giant egg sits onstage, full of mystery, ready for the hatching.

With OVO (Portuguese for egg), the Cirque du Soleil, a storied Canadian company fallen on hard times and dormant for two years,  returns to life (and to Edmonton for seven performances). It’s with a show that premiered in Montreal in 2009 under the Grand Chapiteau, and was reworked for short runs in large-capacity arenas in 2016. And it’s in a corporate venue, Rogers Place, where nets normally receive pucks, not acrobats launching themselves to earth from trapezes.

The egg glows and cracks open to reveal a world of fantastical insects — in perpetual motion, hanging upside down, balancing horizontally suspended by one feeler, scaling vertical walls, twirling lyrically off giant tendrils. It’s a world where the normal rules of propulsion and probability, not to mention the law of gravity, just do not apply. And we see that kingdom from the bug’s eye view, where every blade of grass, every stalk and root, is gargantuan. Under every leaf is an insect waiting for a chance to fly through the air.

In the production written and directed by the Brazilian choreographer Deborah Colker, it’s the playground for some 52 circus performers of  virtuoso skills, acrobatic and contortionist, limber and bendable beyond beyond any reasonable human expectation. They’re invented by Liz Vandal’s witty fantasy costumes, an entomologist’s delight. And when they’re not airborne and and swinging and whirling and leaping, they do a high-speed insectoid scuttle. They pop up from holes on Gringo Cardia’s set, dominated by a climbing wall on which a striking projection-scape plays — close-ups of grass blades or the veins of leaves. 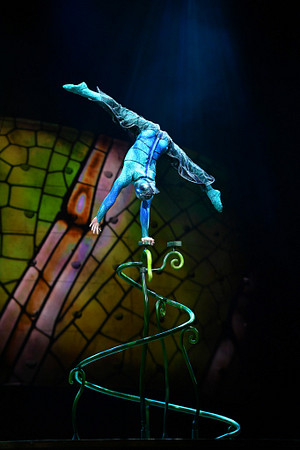 The acts are, as you might expect, first-rate. We see a troupe of red ants slither up and slide down a pole upside down, in squish-defying near-misses, as a chorus of grasshoppers watch. A gorgeous dragonfly balances upside down on one “hand” (or is it “foot”)? A sexy spider bends herself into impossible contortions. A whole troupe of death-defying gold-plated scarabs fling each other through the air on trapezes high above the stage. A cotillion of crickets launch themselves from trampolines and perch atop the wall; I thought they were geckoes, who have no notion of what right side up might mean, but then I wasn’t a biology major. A sinister red-and-black fire bug emerges from flames and wraps himself around spinning hoops. A caterpillar pulses in a chrysalis on a pole, spins silk, and emerges as a beautiful butterfly.

There’s a host bug, a corpulent red-shelled beetle with a gift of the gab (he laughs clicks away at a great rate, and occasionally approaches a human language). There’s a bit of a story, though not a framing one; it’s more a running gag, and it belongs to the clowns. A “foreigner,” a spiny blue fly arrives onstage burdened by an ovo so heavy it leaves him gasping. Yup, it’s one of those romances where the guy brings carry-on baggage.

He’s immediately smitten by a flirtatious charmer of a ladybug. And their on-again off-again courtship weaves its way through the show between acts. Unlike most of the Cirque canon, the clowning involves minimal audience participation — due to the venue, and no doubt to an ongoing pandemic.

This isn’t the Cirque’s signature theatre of surreal imagery and mythic resonance, almost always framed by stage observers for us to observe observing. Unlike, say, Varekai, another tent-arena reinvention which arrived at the old Coliseum in 2015 and landed Icarus in a forest of exotic insects and creatures, there isn’t a kind of presiding story. OVO is a stunningly costumed showcase of pretty breathtaking circus acts.

The visuals are superb. And what a treat to have a live (and lively) band and singer for the music by Brazilian composer/music director Berna Ceppas. The sound is surprisingly good for a vault like Rogers. And if OVO doesn’t have the theatrical punch of other Cirque shows, it’s great entertainment. And no mosquitoes are involved.

Please, Cirque, can we have a tent show soon in this theatre town?