Was it Professor Plum, in the library, with the …? The lead-pipe cinch fun of Clue at the Citadel, a review 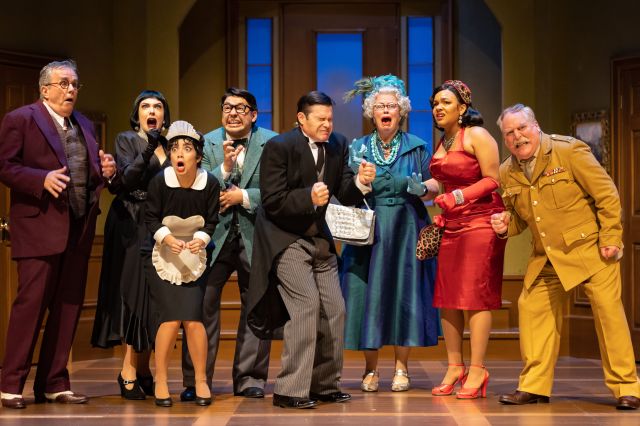 What fun. A high-style midsummer comedy whodunnit with all the trimmings, and a larky air of high camp about it.

That’s Clue, currently dropping clues, suspicions, weapons, suspects, and dead bodies through a mysterious manor house on the Citadel’s Shoctor stage — and scattering throwaway quips as they land. It need hardly be said that it’s a dark and stormy night, the power is very apt to go out, and the telephone lines are in a shockingly precarious state.

When the suave butler with the plummy accent (John Ullyatt) speaks of the game as being “afoot,” he’s not kidding. The game is on its feet, and the players are in constant motion.

Sandy Ruskin’s stage adaptation of the star-stocked 1985 movie (inspired by the classic board game you’ve always played at the cottage) is set in the 50s, the era of the House Committee on Un-American Activities, just outside Washington. “A climate of fear and suspicion” says the voice from the TV. 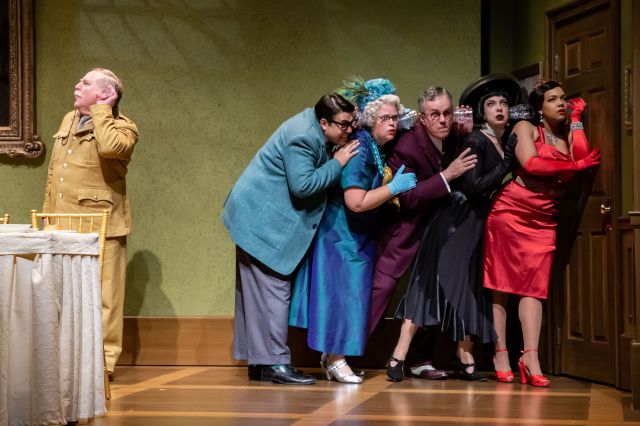 The play introduces the characters at the outset, all with murky D.C. connections. And in Nancy McAlear’s production, they arrive, invitations in hand, with a flourish at the front door of Boddy Manor. They’re introduced by Wadsworth, a figure of Jeeves-like aplomb and inscrutability in Ullyatt’s performance, who specifies that as per their invitations, pseudonyms are de rigueur. And, costumed amusingly by designer Leona Brausen in ’50s regalia, they’re played to riotous cartoon proportions by the cast.

The representative of the military is Colonel Mustard (Julien Arnold in a very funny performance as dim blusterer with malaprop tendencies, invariably a perfect half-beat behind the conversation). Rachel Bowron is the icy Mrs. White, a Washington socialite and serial widow. The tentative, accident-prone Mr. Green (Alexander Ariate) is a gay, which is to say closeted, Republican with a State Department desk job. Mrs Peacock (Darla Biccum) is a shrill church-y Senator’s wife with a mickey in her purse. Professor Plum (Doug Mertz) is a self-assured de-licensed doctor (“it’s a pleasure for you to meet me”) who now “does research” for WHO. The va-va-voom Miss Scarlet (Rochelle Laplante) is a business person with a clientele that’s exclusively male. 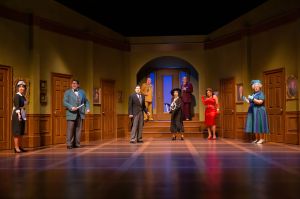 They all have guilty secrets, and they’re all being blackmailed. And as Wadsworth informs them, they’re about to meet the blackmailer who’s also their host. Mr. Boddy (Steven Greenfield) carries a briefcase of evidence, and distributes gift bags each containing a weapon (yup, the candlestick, the wrench, the lead pipe …). The power goes out. And when the lights come on lo and behold Mr. Boddy is dead, and the police will soon arrive.

He will not be the evening’s only corpse. And the suspects, including the pert French maid Yvette (Christina Nguyen) and the psychotic cook (Maya Baker), scramble to identify a killer on the loose who may be one of them. Or not.

Indispensable to the fun is Scott Reid’s set. Like the characters it is in constant motion; actually, on many occasions it’s the cast running on the spot (or dropping dead) and the set moving —  in ingenious ways from the kitchen to the conservatory, the drawing room to the lounge, the dining room to the library, back to the hall. The six closed doors are just the start of it. In this the set is assisted, with great pizzaz, by Patrick Beagan’s lighting, and lack thereof. Michael Holland’s quirky, allusive murder mystery music (supplemented by sound designer Allison Lynch) is fun, too.

This is all very silly, at a level of silliness only achievable by theatrical resourcefulness and impeccable timing. It escalates in speed and intensity, and panic sets in. There are spectacular pratfalls, inspired physical comedy from all participants, danse macabres with stiffs, re-spooling in reverse of scenes but with different outcomes, and in one case a very funny virtuoso re-play of the entire play by one character . Shamelessly entertaining. Shameless, and entertaining.

Written by: Sandy Rustin, with additional materials by Hunter Foster and Eric Price, based on Paramount Pictures 1985 movie with screenplay by Jonathan Lynn, based on Hasbro board game