From the shower into the fray: Underbelly, a Fringe review 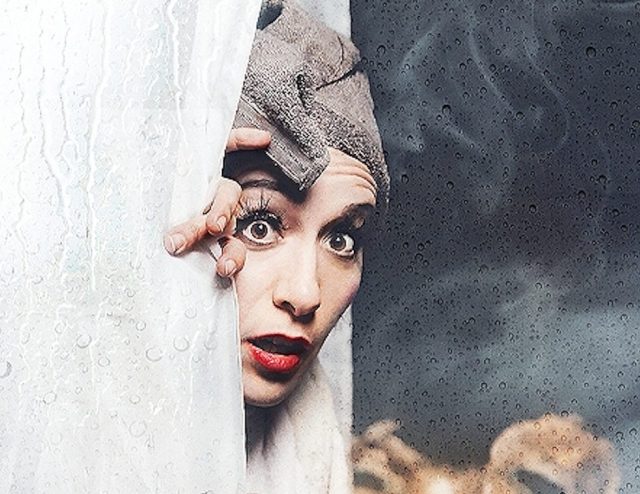 Some days are like that, don’t you find? What starts gaily with singing in the shower has a way of turning into a day when your monster hat becomes an actual monster, swallows you, and horks you out whole with mighty retches of digestive turmoil.

Come to think of it, Underbelly is a clown show with an oral fixation. In the course of this mouth-centric free-associative fantasy by and starring the malleable clown Nayana Fielkov of Ragmop Theatre, singing turns into gargling. In magnified projections on the light-up shower curtain that’s the stage centrepiece, a formidable range of jagged teeth will be brushed, in close-up. Lipstick will be applied slo-mo to lips that become giant kissy lips. A nose is picked with a toilet brush. Miles of string will emerge from a mouth. Severed limbs will be gobbled up. Light-up eyes will be disgorged. Finger food that’s  fingers will be consumed. Inner rumblings and retching and spewing are a major part of the soundtrack.

The doorbell rings from time to time. Is a hot date at hand? “Coming!” trills our protagonist who doesn’t, distracted by her own fantasies.

Clowns seem to be, by nature, free-associaters. By the time our protagonist arrives onstage in the flesh from behind the shower curtain after a lengthy set-up, the toilet brush that’s been up a nostril will become a  microphone, and red lipstick and shower-singing will transform her into a Frenchified chanteuse (gargling turns into those sexy Piaf rrrrr’s). Or the brush is a conductor’s baton and the audience will turn into the orchestra.

In Underbelly, the performer, playful and inventive as she is, works awfully hard at engaging the audience. Too hard, maybe. It’s one thing to acknowledge the audience, but the more the character labours to involve us, the more she seems to step outside the fantasy framework of the show. And the more we see it as a best-of demo series of clownly inventions.

They’re well done, of course; Underbelly is a chance to see an expert clown at work. And there’s amusement in that.