The underwater world of depression: Pressure, a Fringe review 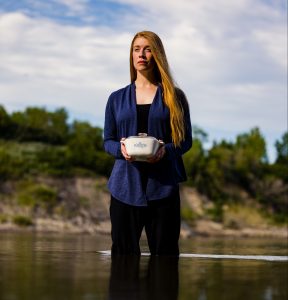 Grace has somehow lost her footing on terra firma. She’s underwater, immersed in another element, fathomless, paralyzing, pressurized, where the ordinary rules of engagement do not apply. She knows how to swim, but the temptation to let go once she’s submerged, is almost overwhelming.

Pressure, a new and convincingly tough-minded play by the up-and-comer Amanda Samuelson, premiering at the Fringe as Nextfest’s first official cross-festival foray, looks for a theatrical way to explore depression. And the spikiest of the insights it sets forth might well be that the loving concern of everyone around Grace (Sydney Williams) — her stellar mom (Sue Huff), her patient partner and soon-to-be ex Ricky (Meegan Sweet) —  who do everything right and are standing by, hands outstretched, are pressure too.

The play is unflinching in its presentation of depression as a self-fed all-consuming relentlessly inward gaze. And in Emma Ryan’s production, you believe all the characters.  Williams, a terrific newcomer, doesn’t shy away from that harsh light. She’s very convincing. So is Huff as a mother whose veneer of cheerfulness gives way to whole depths of terror. Sweet is excellent, too, as an empathetic partner. The fabric of the play is a long un-chronological series of scenes that are not easy to watch, in which Grace, ever more brutally, dismisses love, treats everyone around her badly, worse and worse, and knows it. Get out, she tells her people. “I need to be alone.” Further justification for guilt and self-loathing. Signs of success in her chosen field? Grace’s play has been accepted for an Off-Off Broadway production in New York (New York!). But that’s pressure too. “I feel like I’m a fake.”

Grace’s horoscopes (she’s looking for signs of validation in the universe) are one of the framing devices of the play. They get grimmer. Today: “you are a big fat failure.” Tomorrow: “avoid being too emotional, and being a burden on others.” They’re a veritable  archive of self-loathing en route to, well, self-removal from the scene.  The other framing device is a series of un-mailed letters to her long-absent father, an angry and vicious guy you glean, who behaved terribly to his family. Is his awfulness an inherited trait? Grace wonders.

Emma Ryan’s production lets this incremental declension into paralysis take its time; it’s full of thoughtful and ominous pauses and delayed reactions (Grace only says “bye” after someone has already closed the door).

The experience is a bit exhausting, in truth, because, like depression itself, it moves slowly and sneaks up on you glacially. Serious depression takes time, and Pressure is fulsome and ambitious that way. Can Grace turn things around? And how? Is there a bottom to misery that isn’t suicide?

There’s a mystery attached to those questions. Did I fully understand it? Actually, no. But you need to see it through. No pressure.