Who am I really? Squeamish, a scary solo thriller from Northern Light. A review

There’s blood, a lot of blood, dripping and pooling and trailing through the macabre one-woman thriller you’ll find in the near-dark of the Studio Theatre in the ATB Financial Arts Barn. You can practically taste it.

Which is weird, since Squeamish is a story. And the storyteller, Davina Stewart in a bona fide 90-minute tour de force, is just sitting in a chair in the shadows, talking. There’s atmosphere aplenty in Trevor Schmidt’s production. The room has an eerie sort of elegance, beautifully designed by Schmidt. Chris Dela Cruz’s lighting, which brings colour to the dark, is a virtuoso display of unease in itself, with its single light source.

Side note: never let it be said that Northern Light Theatre doesn’t embrace the spirit of the season. In 2020 about this time of year, in honour of scaring the people, they premiered Trevor Schmidt’s solo gothic thriller We Had A Girl Before You.

In this ever-creepier monologue by the New York playwright Aaron Mark (who seems to specialize in such matters since Squeamish is the third of a trilogy), Sharon, an Upper West Side therapist, has arrived at the home of her own therapist in the middle of the night.

Sharon hasn’t seen Dr Schneider for five months, but this is an emergency, and “I’m a totally different person.” Just back from Texas and the funeral of her nephew Eddie, who’s committed suicide, she’s telling her fellow shrink what’s been happening to her, culminating in the fateful trip. For one thing she’s discovered the disturbing coincidence that Eddie died bleeding out in a bathtub, covered in cuts — just the same way Sharon’s own suicidal mother was found years before. Is it in the blood?

As Stewart’s virtuoso performance conveys, Sharon may look confidently Upper West Side (black dress and shoes, chic silver coif, expensive purse), but she seems anxious, rattled, breathless. She talks, spontaneously, in a volley of fragments, add-ons, and cavils as  details occur to her. Her hands, pale and lit in the dark, are in constant motion, fluttering, gesturing, signalling. Listening to anxious smart people is anxiety-producing, don’t you find? 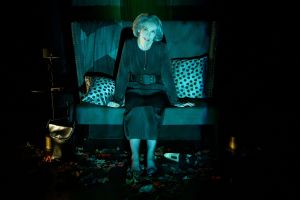 Anyhow, we learn that Sharon — recovered alcoholic, extreme hemophobe (a mosquito bite throws her into a frenzy of revulsion), and coffee junkie — comes from a family with a history of mental illness, suicide, and addiction. Inspired by the oddly serene Eddie who’d visited her in New York months before, Sharon’s taken herself off the psychotropic drugs she’s been on since she was 13. “I needed to find out who I really am. Now. Without dependence on some chemical substance….”

That’s the (blood) red-alert state in which Sharon arrives in Lubbock, from whence she’d fled to New York and a professional career decades before. A certain morbid sense of humour attaches to her views of Texas. “Maybe it’s not sad to die in Texas,” she reflects. The Lubbock chamber of commerce will not be using this slogan any time soon.

Stewart conjures the characters, including her blood relatives, that Sharon meets, with minimal but telling adjustments of voice and hands. Cara, Eddie’s girlfriend, is warm and empathetic, and shows up later by the pool in the hotel where Sharon is staying. “We’re kindred spirits,” says Cara, a consoling sort of person who counsels balance and eats only healthy food.

And secrets about Eddie begin to unspool. I can’t tell you more particulars about the story of Squeamish. Except that it escalates — from unsettling to disturbing to horrifying. If you feel queasy and have to avert your eyes when they extract a routine blood sample at the lab (guilty), you’ll think of the title often. I did.  There was one walk-out on opening night, and I suspect that’ll happen at every performance.

Squeamish is not about the fear of the creeping stalker with the knife. Fear lives closer to home than that (and it suggests, vividly, that there are worse addictions than caffeine). In his notes the playwright argues that phobias and compulsions are two sides of the same coin; I’d have to think more about that. But this play speaks to that view (or rather, it whispers that in your ear). “I wanted to find out who I really am,’ says Sharon to her shrink. “Now I have my answer…. I am a horror.”

It’s in the blood.