On the right track, baby: Vegas Live at the Mayfield, a review

Vegas. The time-honoured holiday fixer-upper for when you want to take a load off, shed your inhibitions and quite a few layers of your clothes, stay up way late, drink giddy drinks, get married, beam come-hither smiles at strangers, use your Westjet points.

The fun of the big, lavish, flashy, full-sequined, full-body holiday revue that’s singing and dancing its Spandex pants off at the Mayfield is that Vegas Live has given the ‘old Vegas’ of the ‘50s the hook.

The Rat Pack is nowhere to be seen. Elvis is apparently on research sabbatical. The only lounge lizard is inflatable and prehistoric (shhh, it’s a surprise). And whenever a vintage Vegas is invoked, Vegas Live updates — as in contemporary versions of The Temptations’ Get Ready or Smokey Robinson’s The Tracks of My Tears (Jahlen Barnes). Or else it’s in the key of playful mockery. In a brief appearance Wayne Newton (Brad Wiebe) keeps nodding off mid-song, and has to lie down onstage, a musical corpse with his own pillow.

Compiled and written by the Mayfield’s team of mystery man Will Marks and Gerrad Everard, the show is a tribute to the Las Vegas of now —  an entertainment capital that’s a destination for some of the world’s hottest contemporary stars in rock, pop, country, soul, funk.… And its larger idea of having a wide cultural embrace does not go amiss in this place (we’re looking at you Alberta) and these parlous, marginalizing times.

Vegas club owner Bobby (Nick Scheculski) enters at the start, in fishnets and full Frankenfurter mode, “just a sweet transvestite from Transexual, Transylvania.” And he sets the tone with a worldly shrug: acceptance, welcome to all, come as you are, “embrace your inner monologue,” “send your gender on a bender.” The theme song, so to speak, reprised in Act II, is Lady Gaga’s “I’m on the right track baby, I was born this way,” and Pamela Gordon nails it.

Bobby’s onstage companion and fellow narrator (Melissa MacPherson), sweetly dazed, libidinous, and no respecter of boundaries (including taste), has evidently embraced her inner stoner chick. You may tire of this chirpy character in the course of the evening and even perhaps fantasize about nailing a sequined tarp over her. She is, however, a veritable archive of old and mouldy nudge-nudge jokes in a new package. 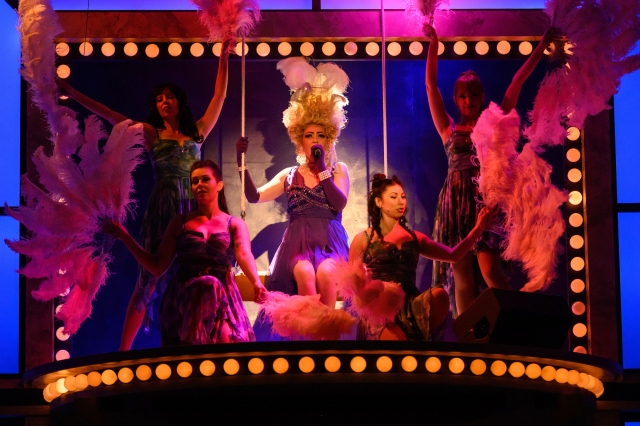 Anyhow, an ensemble cast of 10 with major musical endowments (including taking a turn or two on banjo, trombone, trumpet, violin) throw themselves into a huge repertoire in every style. And they’re accompanied by an expert five-member band (musical director Van Wilmott). The sound, as always at the Mayfield, is impeccable.

The visuals are striking. All of the above co-habit, in assorted permutations, a glitzy two-level set, one of the Mayfield’s biggest ever, designed by John Dinning. It speaks to the improbable, a Vegas specialty: a fantasy showroom framed by a glowing translucent neon proscenium that changes colours, translucent walls, gilt palm trees. And there’s an upper-level balcony stage surrounded by flashing lightbulbs (lighting design by Leigh Ann Vardy) across which Matt Schuurman’s ever-inventive projections dance, sometimes in abstract designs, sometimes in shadow play.

And the songs (and Ivan Brozic’s costumes, all glitter and Spandex) keep coming.

Kudos to choreographer (and, with Wilmott, co-director) Robin Calvert, whose inspirations are detailed, and amusing in every scene. Justin Timberlake’s Can’t Stop The Feeling probably has the show mantra wrapped up, “Ain’t nobody leaving’ soon so keep dancing….” Honourable mention to Garth Brooks (Brad Wiebe): “ain’t goin’ down ’til the sun comes up.” There’s even a barroom brawl as the Act I closer. This is a very busy, versatile cast.

Highlights, to pick a few, include Devra Straker digging into Cher’s If I Could Turn Back Time, Gordon having her way with Alan’s Morissette’s You Oughta Know, Sam Jamieson with Britney Spears’ Toxic, Sheculski with Hozier’s clever Take Me To Church, amusingly staged with a six-member robed choir.

The most audacious choice, arguably, is Elton John’s The Circle of Life, from The Lion King though, to be fair, that musical has actually played Vegas in a shortened form. To me, setting Pink’s open letter Dear Mr. President (“how do you sleep while the rest of us cry?”) to projections of the current war in Ukraine is a misstep: it exhorts a Bush presidency long gone.

No one has ever accused the Mayfield of being stingy with music; this is a fulsome song list and like Vegas itself an evocation of the shiny spirit of showbiz. And there’s going to be a part 2 next year. What happens in Vegas doesn’t stay in Vegas. As Hozier tells us, “I’m a pagan of the good times.”

Created and compiled by: Van Wilmott and Gerrad Everard