It’s the most wonderful time of the year: A Christmas Carol at the Citadel, a review 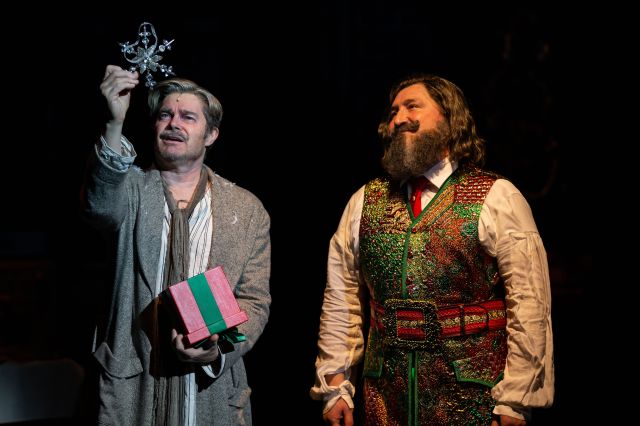 The ‘hap-happiest season of all,’ as the familiar song has it, can officially begin. A Christmas Carol is back onstage at the Citadel for the 23rd year.

Daryl Cloran’s production is thrillingly big, bigger than last year’s incarnation (with a cast of nearly three dozen, including 15 kids), lavishly costumed, full of music (the live band is onstage). And when you hear John Ullyatt as Ebenezer Scrooge — making his Scroogian debut — tentatively say “joy,” like a man exercising extreme caution tasting an unfamiliar fruit in case he has to spit it out, you’ll know something that’s at the heart of Dickens’ indelible ghost story of 1843. Life’s damages take their toll; change is hard; the journey towards human interconnectedness isn’t the autobahn.

As you’ll see again in this the deluxe fourth annual iteration of David van Belle’s cleverly idiomatic, quick-on-the-uptake post-World War II adaptation, its setting adjusts to the  contours of our moment in history. It’s Christmas Eve in 1949 a century and a continent away from the original with Mr. Scrooge as the flinty and furious boss of Marley’s department store. And like the very familiar secular holiday songbook it unlocks, it’s imbued with nostalgia for an age that’s gone (and possibly never was), “tales of the glories of Christmases long long ago,” as that catchy song has it.

In 2020, the show song that struck us to the quick in pandemical times was the wistful Have Yourself A Merry Little Christmas (“if the fates allow…”). In last year’s return to live, I’ll Be Home For Christmas took on new colours, along with the notion of home. This year? The sheer bustling togetherness of The Most Wonderful Time of the Year (“There’ll be much mistletoeing/ And hearts will be glowing/ When loved ones are near ….”).  On opening night, I found the sound mix in early scenes a little band-heavy, a temporary excess of enthusiasm perhaps. But the music is used more skilfully, and judicially, than in the production’s earlier incarnations.

True, this adaptation doesn’t reach the debtor’s prison/workhouse/annihilation by starvation stakes of the Victorian original. But the entrenched inequities of the 20th century, and our own, are traumatic. And the sense of humanity struggling to find some sort of footing in the sharp crevices of the world is recognizable to us now. 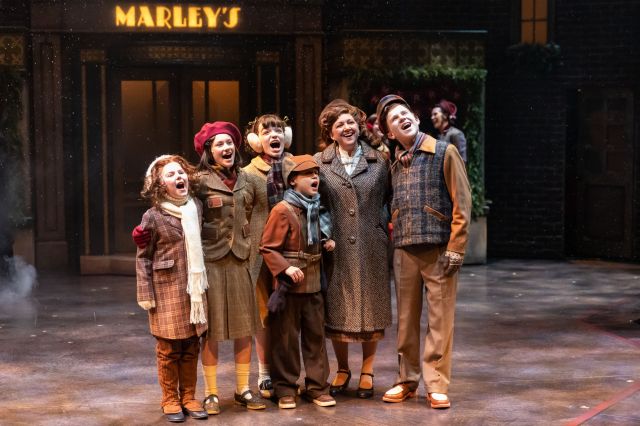 The Cratchits in A Christmas Carol, Citadel Theatre. Photo by Nanc Price.

The Cratchits are a single-parent family up against it. Post-war there’s no Bob Cratchit. Mrs. Cratchit (Alison MacDonald) is the  beleaguered store manager in Scrooge’s tyrannical grip at Marley’s. “Cratchit!” barks Scrooge, who allows that she might have a first name but doesn’t know it.  Christmas Day off? Don’t be silly. Health benefits? Forget it. Tiny Tim (the adorably grave 10-year-old Elias Martin, who knows something first-hand about living with disability) is a fragile figure, on a slippery slope to oblivion.

One image that struck me with new force this year was the two scary children introduced by the Ghost of Christmas Present as a final warning: Want and Ignorance. In van Belle’s conception, they’re not the offspring of poverty; they’re the insatiable, vicious products of affluence — the wanting more and more, ignorance armed with a gun. It’s been a year for that.

The central inspiration of Cloran’s stagecraft, and Cory Sincennes’ handsome design (lighted beautifully by Leigh Ann Vardy), is the revolving department store door at Marley’s. It sends characters onto the Maclab’s thrust stage and sets them in motion, into the world of post-war retail over which Mr. Scrooge presides with brute force. Since he lives over the shop, physically and metaphorically, it’s his HQ. And it’s the starting point of the ghostly intervention that will send him on a tour of his past that is a journey of last-minute redemption from solitary damnation. 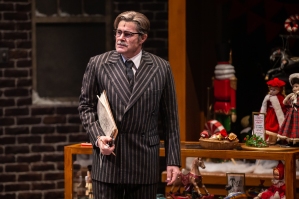 Ullyatt, a wonderful actor, digs into the role of Mr. Scrooge with an energetic fury that goes beyond exasperation into the realm where anger is the obverse side of pain. The musical exhortation to “be of good cheer,” a mainstay of retail practice and seasonal orthodoxy, ups the ante, but the ante was already high. “Scram! Get outta here!” he shouts at an a cappella choir, all dressed up from Victorian Christmas Carols past (like the Citadel’s hit Tom Wood adaptation of 19 seasons standing) past. “Dressed up like it’s Old-Time-y London… you look ridiculous.”

“Wrap it up!” he hollers at the in-store Santa, in a dubious retail marketing decision based on his observation that the customers waiting in line aren’t actually shelling out for something. “Fire her!” Mr. Scrooge tells Cratchit vis-à-vis a new employee who has arranged a display that doesn’t front-rack the colour red, as required by company policy  (red increases sales by 5.4 per cent).

“Why should I subsidize the lazy?” he snaps at two businessmen collecting Christmas money for the poor. “You don’t work you don’t eat.”

In ways that are sometimes difficult to define, the performance has a different tone and energy from that of Ted Dykstra, who originated the role in the production’s 2019 premiere and occupied it twice more. For one thing, acid-flavoured irony isn’t its keynote. Ullyatt’s performance makes of Scrooge’s tour of his past a veritable archaeological expedition to a trapped self, through layer after layer of inflammable dust and protective granite, uncovering “consequences” (his go-to expression) as it goes. 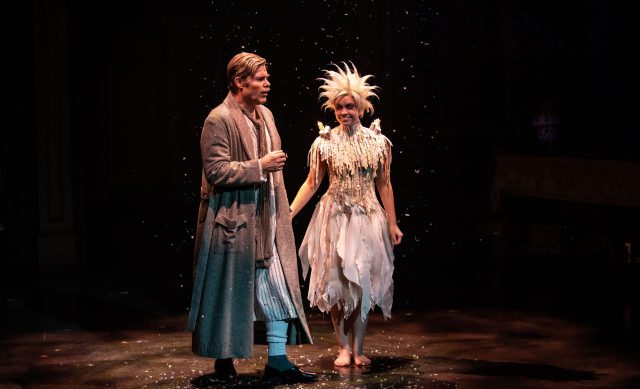 The lyrical nostalgia of White Christmas, the signature song of The Ghost of Christmas Past (hauntingly played by Lilla Solymos), is anathema to him. “Does your mother know you play with candles?” he snaps at the ghost, who wears them on her shoulders. Even his astonishment has an ashen-lipped stricken look to it when the Ghost takes him back to the abuses inflicted on his impoverished boyhood self. 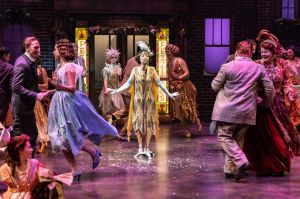 The Fezziwigs’ Christmas dance party, which returns Scrooge to his Jazz Age self, is again a highlight (choreographed by Cynthia Jimenez-Hicks). Julien Arnold and Ruth Alexander as the host and hostess  pretty much define the outgoing high spirits of Christmas generosity. Even thinking about Mr. Fezziwig’s red pompadour hairdo makes me smile. And Sincennes’ costumes seem even more gorgeous, and detailed than we saw in 2021.

It’s an irresistibly rambunctious highlight scene. And Ullyatt’s watchful Scrooge, taken aback as he is, manages a rusty semi-smile that vanishes as soon as it appears. The excellent Braydon Dowler-Coltman returns to the role of Scrooge’s younger self, Ben to his friends. He’s eager to present as ambitious and positive to Belle (Daniela Fernandez) and is nearly, but not quite, able to conceal an undercurrent of obsession about success, and money.

The ebullient Ghost of Christmas Present, a born performer (“I don’t teach baby, it’s all show and tell”), is played with great showbiz zest and good nature by Sheldon Elter, who replaces Ullyatt this year in that role (and in an extremely festive green satin suit with red trim).

The script has acquired a tiny resonant scene that’s a counterpart to the Act I moment when Scrooge rebuffs a lost immigrant family clutching a map and needing directions. “Learn. To. Speak. English,” he tells them. In Act II The Ghost of Christmas Present speaks to a couple of kids in their own native language. “I’m good at reminding people of home,” he says to an incredulous Scrooge, who seems equally perplexed by the ghost’s language skills and his kindness.

Is it my imagination that the script seems to have been tweaked in other ways, too, that particularly suit Ullyatt’s timing and cadence? In any case, on Scrooge’s ghost-led tours, his performance beautifully calibrates the incremental consequences of Scrooge’s choices en route to the damning knowledge of the misery he’s caused. “I don’t know what to do…. I think it’s too late.”

And his discovery of a new self that’s been there along, buried inside the layered fortress of the old Scrooge, gives a particular bounce to the Christmas morning scenes. The possibilities of joy in generosity and human connection are giddy: you’ll see what full-body delight looks like. Scrooge, amazed by himself,  is testing his new limbs by giving gifts. “I’ll change; I am changing,” he declares. And that matched pair of verb tenses is telling.

The little scene in which Uncle Scrooge arrives at the home of his ever-hopeful nephew Fred (Oscar Derkx) and his wife (Patricia Cerra) is wonderfully negotiated by the actors. “I didn’t know how to be part of a family,” says Scrooge finally, humbly, throwing himself on their forgiveness.

And family, in both the domestic and the worldly sense of the larger human network, is what it’s all about. The packed opening night house understood that perfectly as they roared to their feet.