So what happens next? Die-Nasty does A Christmas Carol part 2 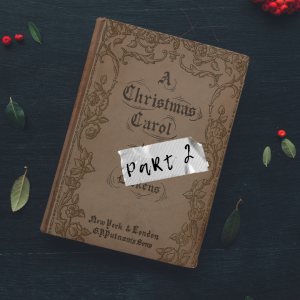 So what happens to the Cratchits, the Fezziwigs, and Old Scratch himself after that fateful make-over Christmas, anyhow? Don’t tell me the question has never crossed your mind.

Tonight at the Varscona Theatre is your only chance to find out. A Christmas Carol (Part 2) will reveal all. And since it’s entirely improvised by the Die-Nasty cast with special guests, even the actors don’t know how things will turn out.

Will Tiny Tim, who seems to have had a major growth spurt (he’s played by lanky Tom Edwards), go to college and become a drama major? Do the Fezziwigs retire to Vancouver Island and take up organic Christmas tree farming? Does Mr. Scrooge take up ghosting himself? The future is mysterious.

The cast features Cody Porter as the old skinflint, with Rebecca Bissonnette as the invaluable Mrs. Dilber, whose recipe for gruel is second to none. Joleen Ballendine guests as the Ghost of Christmas Yet To Come. Bob and Emily Cratchit are played by Jason Hardwick and Kristen Throndson. Delia Barnett is “the last Fezziwig.” And Ellen Chorley is Charles Dickens (who has a lot to account for since he never got around to writing the 10-year sequel).

The evening at the Varscona (Die-Nasty’s first annual Holiday Fundraiser as billed) includes a silent action that includes theatre tickets. And tickets are on a variable ticket pricing system, starting at $15. They’re available at varscontheatre.com.