I know what you’re thinking. You’re lost in the dark forest of Top 10 lists, regrets, bleak self-improvement projects. You’ve drunk the champagne of finality. You’re thinking the curtain has come down and the year is over.

That’s the beauty of live theatre in a theatre town. It was only intermission. And intermission is over. You have prospects for Act II, my friends.

In the spirit of anticipation, therefore, I offer a modest sampling of possibilities for the half-season to come.

See the much-awaited latest from the endlessly original creators at Catalyst Theatre. Fortune Falls — book by Jonathan Christenson and Beth Graham, music/lyrics by Christenson — is a five-actor chamber “musical” with a sweet tooth; it tells the story of a candy town. When its chocolate factory closes down, its very raison d’être, what happens to its identity, its dreams, its place in the world? Calgary got to see it first: Fortune Falls was developed in collaboration with Alberta Theatre Projects. Now it’s our turn, January 17 at Catalyst’s new home, the Citadel’s Maclab Theatre.

See theatre that steps up to the most inflammatory and immediate modern subjects. Like Islamophobia. Disgraced, Ayad Akhtar’s Pulitzer Prize winner of 2013, is a two-couple dinner party that gradually comes unglued as tensions escalate. It’s at the Citadel Jan. 21 to Feb. 12 in an acclaimed production from Toronto’s Hope and Hell Theatre Company. Post-show arguing in the bar a distinct possibility. 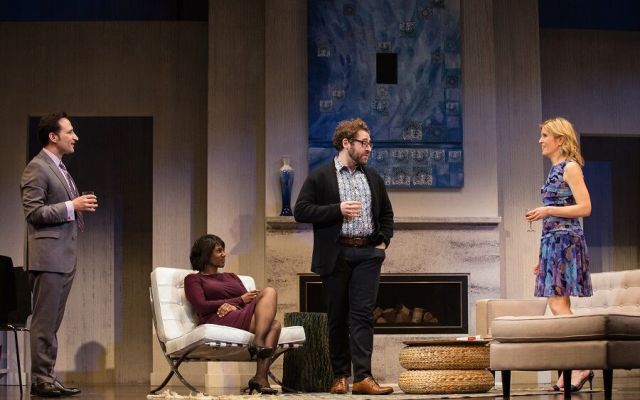 Disgraced, Hope and Hell Theatre company is coming to the Citadel

Or try Bust. a new dark comedy from Matthew MacKenzie (Bears, The Other), set in the post-fire Fort McMurray: two couples at a kids’ hockey game where, in the tensions of that shattered world, something shocking happens. It premieres at Theatre Network Feb. 7 to 26.  MacKenzie’s other premiere, Bone Wars, set in the Badlands and referencing, no doubt skeptically, our insatiable appetite for fossil fuels, happens at Punctuate! Theatre April 20 to 29. 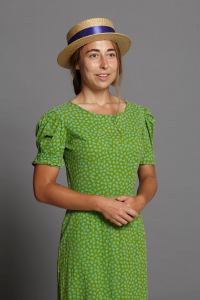 See the 2016 Alberta Playwriting Competition grand prize winner: Chris Craddock’s Irma Voth. This adaptation of the Miriam Toews’ novel is from a playwright with a known command of dark comedy, heartbreak and theatrical pizzaz, demonstrated on another Toews adaptation, Summer of My Amazing Luck. The stellar Theatre Network cast you’ll see April 20 to May 7 includes the playwright, Kendra Connor, Kristi Hansen, Todd Houseman, and in the lead role, Andréa Jorawsky.

Experience musicals in every shape and size, and see first-hand what supple forms musical theatre can get itself into — from musicals that require their tap shoes to “musicals” that cry out for quotation marks, like Catalyst’s Fortune Falls.

On the one hand there’s Crazy For You, a ’30s-style vintage song-and-dance musical sparkler fashioned in the ’90s from the 1931 Gershwin musical (Girl Crazy), a lustrous array of hit Gershwin tunes from there and everywhere, and a giddy story about New York showbiz transplanted to Deadrock, Nevada. Yup, singing and dancing cowboys. Andrew MacDonald-Smith stars, in a Citadel cast that includes Rachel Bowron (March 4 to April 2).

Or there’s the warm-hearted Harvey Fierstein/ Cyndi Lauper musical Kinky Boots, touring to the Jube under the Broadway Across Canada flag Feb. 14 to 19.  Your only chance this season to see choreography specially designed for a moving conveyor belt.

On the other hand, there’s a new sequin-free Clinton Carew/ Kris Schindel  “musical comedy about the end of the world.” Star Killing Machine comes to Azimuth Jan. 17 to 29, in a Broken Toys Theatre production. It takes us to the factory where scientists work to create the ultimate apocalyptic machine.

In between, on that colour palette, explore a two-actor American musical about the doomed love-affair of Depression era bank robbers, Bonnie and Clyde at Northern Light (May 5 to 21).

You could have the fun of  new screwball comedy: Going Going Gone, a Preston Sturges-style concoction by the gifted comic actor/writer Jana O’Connor premieres in the Teatro La Quindicina season June 22 to July 1.

You could follow a playwright with a known taste for risk. If you saw Pig Girl, her Governor General’s Award winner, or Armstrong’s War, you know something about the fearlessness of Colleen Murphy. Burning Bright (March 30 to April 8) was specially written for Studio Theatre’s current graduating class of U of A actors. The characters? The young, disenfranchised, and restless. 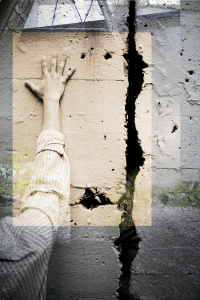 You could meet a hot young playwright who hasn’t been properly introduced to Edmonton audiences. The enterprising indie collective Cardiac Theatre brings us Peter Fechter: 59 Minutes (Jan. 10 to 22), one of the three solo plays in Jordan Tannahill’s Governor General’s award-winning queer youth trilogy Age of Minority. It was inspired by a photograph of an 18-year-old East German bricklayer shot while attempting to cross the Berlin Wall with his boyfriend in 1962.

• Indulge your romantic side. The Plain Janes have had to delay plans for the musical Women on the Verge of a Nervous Breakdown due to a default in project funding that extends to the entire Varscona Theatre family of companies. Instead, Kate Ryan, who devised the Plain Janes’ Noel Coward revue of last season, has put together Ah! Romance!, a revue of “everything romantic from the musical theatre canon.” The cast includes Bridget Ryan, Jocelyn Ahlf, and Ron Pederson.

• The Senegalese artist Patricia Gomis brings her solo show Moi, Monsieur, Moi! to town Feb. 7 to 11, as part of both the L’UniThéâtre season and BAM (Black Arts Matter) programming at Canoe Festival 2017. She evidently uses clowning and puppets to tell a fraught coming-of-age story about growing up female in Africa. Don’t worry if your subjunctive isn’t up to scratch: there are subtitles.

• One of the most curious of all Stewart Lemoine comedies opens the 2017 season at Teatro May 25 to June 10. In The Salon of the Talking Turk, which premiered in 2005, a ’20s New York flapper acquires a life-sized fortune-telling automaton, all the rage at the time. The great comic actor Mark Meer, who originated the role, returns for the revival. The Teatro season also revisits Lemoine’s 24-year-old Shocker’s Delight, a story of collegiate friendship, love, responsibiity, and heartbreak directed by Ron Pederson, who starred in a 2004 revival of this, his favourite play. Guarantee: the only play of the season in which Biedermeier Era furniture comes up for discussion.

• Shadow Theatre puts Glenn Nelson, John Sproule, and Frank Zotter in front of a white-on-white canvas for a revival of one of repertoire’s most stylized and witty comedies about our reactions to … art. It’s Yasmin Reza’s Art, April 27 to May 14.

• Farren Timoteo’s stage memoir about growing up Italian, Made In Italy, premiered at Western Canada Theatre in Kamloops this past fall — in a Daryl Cloran production. How’s that for oddball coincidence?  Loran is now the Citadel artistic director; his production plays the Citadel Club April 27, our only sighting of his work this season.

• Never miss a Nicole Moeller play if you can possibly help it; they’re always worth seeking out for the complex challenges they present in subject matter wrapped in theatricality. There’s a new one: The Preacher, the Princess, And A Crow (May 18 to 27 in the Azimuth season). And, hey, Moeller’s story of an urban loner stars Steve Pirot, a distinctively offbeat and dangerous sort of actor.