A musical comedy in which a town and its citizens are transformed by putting on a show — a notion that Edmonton can enthusiastically get behind — proved the top choice of jurors as the 30th annual Sterling Award nominations were announced Monday at the Varscona Theatre.

That show is Crazy For You. And the Citadel/ Theatre Calgary co-production directed by Dayna Terkatch scooped up nominations in eight of the 24 Sterling categories, including outstanding musical production and recognition of Andrew MacDonald-Smith’s captivating star performance as the star-struck rich kid who saves a theatre.

The juror gave double Sterling nods for Cory Sincennes’ set and riotous costumes, Gerald King’s lighting, and Don Horsburgh’s musical direction. In an unusual appreciation for the way the musical moved and danced onstage and raised the stakes on the fine art of the pratfall, both Terkatch’s choreography and Jonathan Purvis’s fight direction got nominations in the same category.

Actor Mathew Hulshof presided over Monday’s announcement — the prelude to the June 26 Sterling Gala at the Mayfield Dinner Theatre to celebrate the best of Edmonton theatre this past season.

If Crazy For You is reworked from an earlier Gershwin musical, the two other most nominated productions of the season have roots in other creations, as well. The indie Edmonton Actors Theatre production of Stupid Fucking Bird by the American playwright Aaron Posner is up for Sterling awards in seven categories; Chris Craddock’s adaptation of the Miriam Toews’ novel Irma Voth has six nominations.

Irma Voth, which premiered at Theatre Network in a Bradley Moss production, garnered Craddock an Outstanding New Play nod, along with nominations for director Moss, for Andréa Jorawsky in the title role, and for Kendra Connor in the supporting role as Irma’s feisty kid sister, along with Sterling salutations for designer Megan Koshka and for the multi-media ingenuity of Ian Jackson. Stupid Fucking Bird, a sassy, irreverent and apt retrofit of Chekhov’s The Seagull was recognized by the jurors with nominations in the independent theatre category, as well as for director Dave Horak. Four of the performances from its crack ensemble received nominations: Mat Simpson in the leading actor category, and Ben Stevens, Robert Benz, and Melissa Thingelstad as supporting actors.

Here’s a life-and-art reverb you won’t see anywhere else across the country this awards season. The late great theatre actor/ director/ impresario after whom Edmonton’s awards are named, actually showed up as a character onstage in a play this year — and as of Monday it’s a Sterling-nominated play at that.

Darrin Hagen’s Witch Hunt At The Strand, which launched the Workshop West season, is one of the five nominees for outstanding new play. And Davina Stewart’s grandly imperious performance as the redoubtable Mrs. Haynes in a story unearthed from an ignominious chapter in our civic history, is up for a Sterling in the supporting actress category.

Two of the other nominees in the intriguing New Play category have a local resonance, too. Matthew MacKenzie’s (very) black “comedy” Bust, which premiered at Theatre Network, is set in Fort McMurray post-fire. And Stewart Lemoine’s For The Love of Cynthia, a comedy fable that premiered in the Teatro La Quindicina season, was written to be the first production in the newly refurbished Varscona Theatre. It involves a festive opening of traditional boundaries — the kingdom of Cynthia, about as big as a farm, is west of Drayton Valley and south of Lodgepole — and the creation of a play-with-in-a-play to celebrate.

The other new play nominee is unusual in provenance, too: Sister Sister, a dark-hued sibling dysfunction comedy by the American playwright Barbara Blumenthal-Erlich. Its debut production happened in Edmonton AB, at Northern Light, directed and designed by Trevor Schmidt. One of Louise Lambert’s two Sterling nominations is for her performance in Sister Sister; the other is her supporting work as the Nurse in the Freewill Shakespeare Festival’s production of Romeo and Juliet. 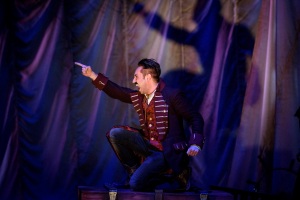 In all, the Citadel comes away with 19 Sterling nominations, the most by far of any theatre company. In addition to the eight for Crazy For You, five — including outstanding production, director, musical director, and costume design — are for James MacDonald’s production of the Peter Pan prequel fantasy Peter and the Starcatcher, and the riotous star performance from Farren Timoteo as Black Stache, the one-handed pirate king and upstager whose evolving identity will not escape you.

Theatre Network received seven nominations in all, Edmonton Actors Theatre six for Stupid Fucking Bird. Of the Freewill Shakespeare Festival’s five nominations, four are for Marianne Copthorne’s Romeo and Juliet. Teatro La Quindicina’s five nominations, two are for Witness to a Conga, a Lemoine comedy in the outstanding production category, in which a man dances his way out of a heart-heavy boyhood into joyful forward momentum.

Northern Light, and the indie company MadFandango (for Nancy McAlear’s production of Bryony Lavery’s enigmatic The Believers) will hoist a glass at the Sterling gala with four nominations apiece. After that, the nominations are dispersed pretty equally amongst companies of every size, from the Mayfield (Jesus Christ Superstar) to  Cardiac (Peter Fechter: 50 Minutes) and Wild Side Productions (10 out of 12).

The theatre for young audiences categories are dominated by Bello (a Concrete Theatre/ L’UniThéâtre co-production of a new Vern Thiessen play) and Hansel and Gretel (an original musical from Alberta Opera).

On Sterling gala night at the Mayfield, hosted by Nadine Chu and Mark Meer, the Citadel’s Cheryl Hoover will be going home with the Margaret Mooney Award for achievement in administration. Betty Hushlak will receive the Ross Hill award for career achievement in production. To Maralyn Ryan, actor/ director/ playwright/ teacher/ mentor and founding artistic director of the highly influential St. Albert Children’s Theatre, goes the Sterling for most valuable contribution to Edmonton theatre. 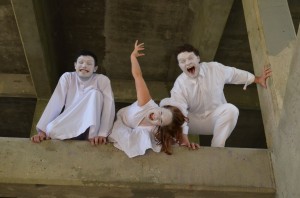 Morgan Grau, Sarah Feutl, Graham Mothersill in The Fall of the House of Atreus. Photo supplied.

The Sterling Award for the Most Valuable Contribution to Theatre in Edmonton: Maralyn Ryan