I went to that bash at Brad’s: Everyone We Know Will Be There

Everyone We Know Will Be There, Tiny Bear Jaws at Nextfest 2017. Photo by Mat Simpson

So, I was at this house party last night….

Brad was turning 17, and (thank god) his parents were out of town. People got high. Kids got trashed, in every sense of the word. Kids had sex and got into fights, not necessarily in that order. Secrets got spilled, along with booze. Discoveries — mutual, sibling, and self — got made. And at one point, I kid you not, some of us found ourselves watching Planet Earth on Brad’s brother’s bedroom wall.

Tiny Bear Jaws may be small but it’s sharp of tooth (and eye and ear), judging by Everybody We Know Will Be There, premiering at Nextfest. In Elena Belyea’s site-specific play, happening in a house in the southwest Edmonton suburbs,  you get a close-up of contemporary teen world — because you’re there with teen party-goers. 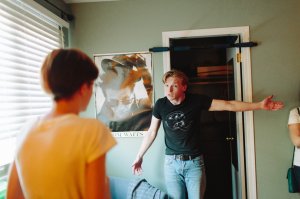 Everyone We Know Will Be There, Tiny Bear Jaws at Nextfest 2017. Photo by Mat Simpson

You’re right next to them all the way, shadowing them upstairs and down, outside in the garden and leaning against the fridge in the kitchen, hearing what they’re overhearing, seeing what they’re seeing in person and on their cellphones, sharing their conversations, texts, and their throw-away lines, the smart-ass and the defensive. Every ‘fuck-you!’ is so close it makes your eyes water. How the hell does anyone survive high school, anyhow?

Andrew Ritchie’s production isn’t about a teen party, it is one — in real time and real space, with real intimacy. And it feels compellingly authentic, thanks to intricate stagecraft in a whole house of rooms (plus the yard) and fearlessly natural performances from a cast of five principals and an ensemble of eight.  It’s Booze at Brad’s (to Teatro La Quindicina’s ‘50s-style real-time unravelling, Cocktails At Pam’s). 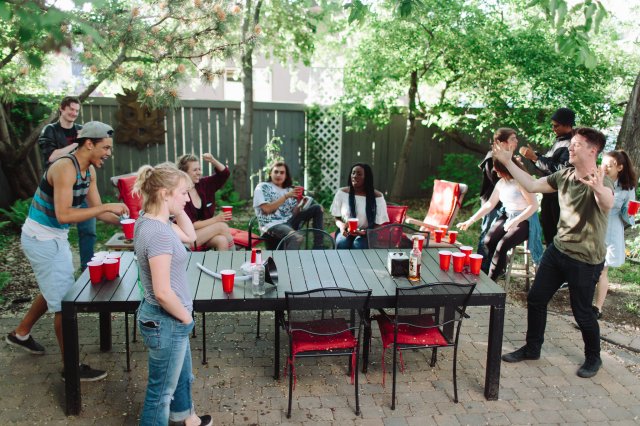 Everyone We Know Will Be There, Tiny Bear Jaws at Nextfest 2017. Photo by Mat Simpson.

Since you’re one of five following one of the five central characters — a total audience of 25 a show — through the party,  you see the occasion through one pair of eyes. So if you go to the show with someone, as I did, and get a separate assignment from your partner, there’s the bonus of  discussing on the way home what the party was like from another perspective.

Everyone We Know Will Be There, Tiny Bear Jaws at Nextfest 2017. Photo by Mat Simpson.

I ended up with the nerdy outsider who’s braved hostility and crashed the party, motivated by reasons you’ll have tp discover for yourself. My partner was with Brad’s brother’s best friend. We didn’t even have the same sense of what just happened at Brad’s place. Like every raucous party you’ve ever gone to, it’s virtually a different event depending on whom you hang with.

You can only imagine how complicated this kind of spontaneous chaos, at the intersection of the individual and the group, is to synchronize. The natural rhythms of start and stop, and the scrambly, brusing escalation of tension fuelled by booze, happen at Brad’s place: stories within stories. Kudos to Belyea, Ritchie and stage/production manager Tori Morrison, all founders of Edmonton’s Found Festival, for figuring out the smaller personal arcs within a larger arc of a “play.”

I can’t tell you more without spoiling something for you. But identity and gender are evolving, malleable things. So is the tension between being an individual and being embraced by a group that could turn on you at any moment.

While my group was circling the house from the outside — a pursuit with door-slamming and yelling — a passerby rode by on his bike, did a classic double-take, and rode back in the other direction. He was wondering what he was missing. Who could blame him?

Everyone We Know Will Be There