How did we get here? A Quiet Place at the Fringe. A review. 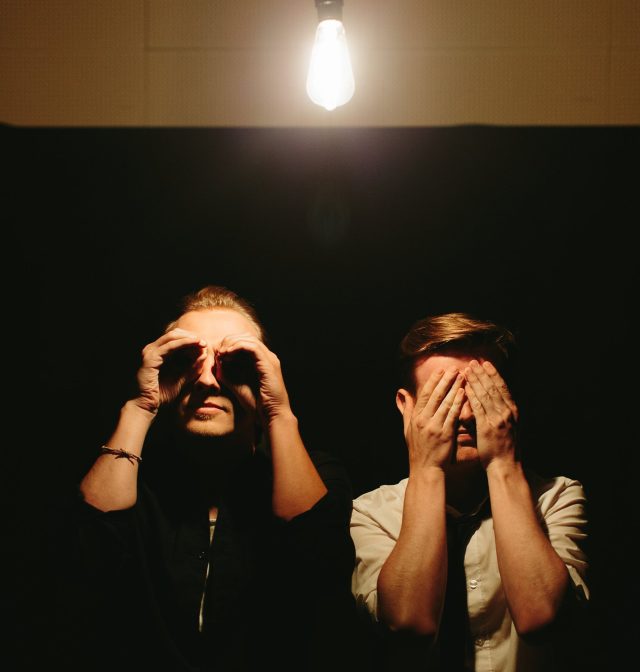 Two men are in a small room that’s completely empty except for a lightbulb and a red chair. One of the games they’re playing to pass the time is I Spy.

It’s a punchline — to the cosmic existential joke that is the barebones situation in this homage to Beckett comedy by the Canadian actor/playwright Brendan Gall.

For as long as he can remember, for no reason he can fathom, Henry (Braydon Dowler-Coltman) has been in the windowless doorless room by himself. Then, either he’s been sleeping or he blinks, and, voilà, there’s another man in the room, tied to the red chair.

Every time David (Luc Tellier) demands  “hey, what is this?” or “why are you doing this?” Henry knocks him out again. Naturally David assumes he’s a prisoner and Henry is his jailer.

But before long they come to the realization that they’re in this together. Like Beckett’s tramps in Waiting for Godot, hoping to find some meaning in their existence here in the room, they reason that “there must have been a moment before.”

Have they always been here? The why? question stumps them every time. To wait without waiting for something is, in effect, to stop time. “I’d kill for a clock,” says one.

So, like Vladimir and Estragon by the tree, they devise ways to amuse each other and themselves. David teaches Henry chess; Henry teaches David tai-chi. The dialogue, like the physical comedy of the piece which escalates, is funny, and gets funnier. And Dowler-Coltman and Tellier make the most of both, in this sharply timed production directed by Evan Hall, a fine actor (Gruesome Playground Incidents) making his director’s debut here.

Dowler-Coltman is the chattier one, more determinedly upbeat in his approach to nothingness; Tellier is the one who has to be coaxed. The chemistry is fun, though that particular f-word really doesn’t come up much in existential voids. The performances are first-rate.

Where meaning doesn’t exist, and time doesn’t pass — the “great reckoning in a little room” that David alludes to, quoting from Shakespeare’s As You Like It — man has to invent them. Or at least camouflage their absence. He has to amuse himself by inventing rules, and victories. And plotless plays like this one.

“I dreamed I was alone,” says David with a little shiver. “You are alone. We both are…” says Henry. Sartre didn’t think so, in his No Exit, but having company to be alone with is in the end a cosmic consolation.