Dream on! A Midsummer Night’s Fringe has holdovers!

It’s not time to wake up yet. Some of the hottest shows at A Midsummer Night’s Fringe, the 36th annual edition of our summer theatre bash, are being held over.

FRINGE THEATRE ADVENTURES: At Fringe headquarters, the ATB Financial Arts Barns, starting next week, you can catch the following:

Prophecy: Jessy Ardern’s witty new solo gut-puncher for Impossible Mongoose is set in the endless destructiveness of the Trojan world, but it resonates powerfully in our time. And it extrapolates from Cassandra’s terrible god-given gift: she can foresee the future but she will never be believed. A powerful performance from startling  newcomer Carmen Nieuwenhuis.

Drunk Girl: Thea Fitz-James is the charismatic creator and star of this disarming and high-spirited memoir that explores in a serious way the high price tag, and sexist double standard, on finding liberation in booze.

Legoland: This entertaining oddball of a comedy by Jacob Richmond (Ride The Cyclone) is a home-made theatrical presentation by two home-schooled siblings — an odyssey through America and its pop culture clichés. Luc Tellier’s production features  comic performances from two of our best: Jenny McKillop as the eager-beaver older sister, and Rachel Bowron who’s very funny as her intense nihilist younger brother.

Love Lies Frozen in the Ice: I haven’t yet seen this new show from the London company Dead Rabbits Theatre yet. But I loved The Dragon last year. And my ever-insightful fellow 12thnight.ca reviewer Todd Babiak called it “strange and wonderful.” He was enchanted by this inventively theatrical tale of three 19th century explorers who head for the North Pole in a balloon. 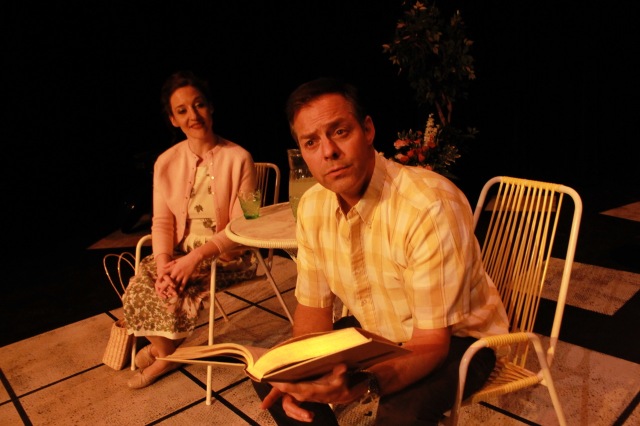 The Exquisite Hour: Stewart Lemoine’s beautiful comedy for two, The Exquisite Hour, a shimmering exploration of the way a sealed-off solitary, “ordinary” life can suddenly open up to possibility, continues its run next week as part of the Teatro La Quindicina summer season. I’m excited to see the revival of one of my favourite Lemoines tonight. Todd Babiak, who counts the play as one of his favourites too, saw it last weekend, and loved it again: “moving, mysterious, masterful.”  Tuesday Sept. 29 through Friday Sept. 1 at 7 p.m. Saturday Sept. 2 at 2 and 7 p.m.

No Exit: Jean-Paul Sartre makes his Edmonton Fringe debut in this crack Bright Young Things production of his very witty, tough-minded, and — who knew? — sharply funny No Exit. In Kevin Sutley’s production Ron Pederson, Belinda Cornish, and Louise Lambert find themselves in hell — and hell, as the Sartre insight has it, is other people. No, this is not some French existentialist manifesto in favour of one-man Fringe shows. This is a terrific four-actor cast! Friday, Sept. 1, 9 p.m.

Urinetown: Grindstone Theatre’s production, rockin’ by all reports, of this raucous satire of capitalist greed has been packing ’em in at Holy Trinity. The musical,  which rocketed from Off-Broadway to On-, scooping up awards as it went, has attracted a deluxe cast of 14 (and a four-piece band) to Byron Martin’s production.  Martin is holding the show over Tuesday to Thursday (Aug. 29 to 31) at Holy Trinity. Tickets: Grindstonetheatre.ca