From Romeo to Shakespeare: meet Andrew Chown, the actor who plays the mystery man 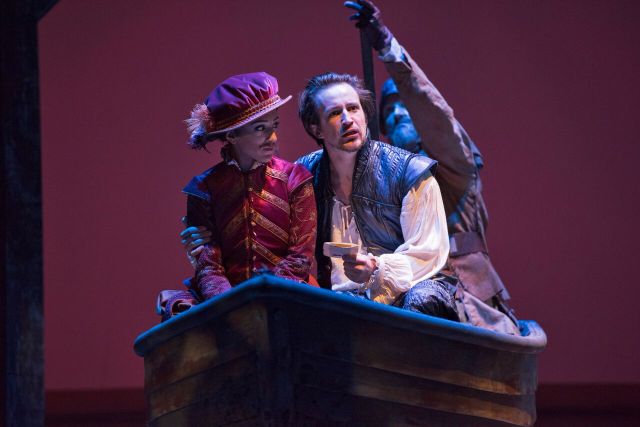 Andrew Chown as Will and Bahareh Yaraghi as Viola de Lesseps in Shakespeare in Love. Photo by David Cooper.

So who is William Shakespeare anyhow?

The world has always wondered. And in the romantic comedy that opens the season Thursday on the Citadel mainstage, we meet the mystery man himself — as a young working up-and-comer actor/playwright, struggling to make his way in the volatile theatre world of London in the 1590s.

“A guy who likes to write and can’t. Who meets an amazing woman and starts to write again”: that, in a nutshell, is how Andrew Chown describes Will in Shakespeare In Love, the stage adaptation of the 1998 Oscar-winning movie created by Marc Norman and the great playwright and theatre wit Tom Stoppard.

Chown, quick-witted himself, is the young Toronto-based actor who plays Will in Daryl Cloran’s debut production as Citadel artistic director. And a rueful laugh from him en route to rehearsal acknowledges that getting cast as the starriest playwright in the history of the world is the plummiest and also, in a way, the most daunting of assignments.

“How can you play a genius if you aren’t one?” Questions like that are a leading cause of thespian anxiety. “So much research, and theorizing about who he was and wasn’t,” sighs Chown. “You could get lost going down that rabbit hole.”

On the other hand, look on the bright side, there’s remarkably little known — besides an enigmatic will, a selection of signatures spelled a little differently, a couple of business invoices — about the glover’s son from Stratford who moved to London and changed the world. And that’s got to be liberating. “It’s all theory,” says Chown cheerfully. “None of us were there…. And he doesn’t reveal himself in his plays; (with his characters) you can never really tell whose side he was on.” 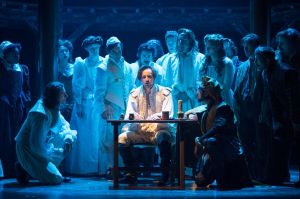 Shakespeare In Love captures the great man as he struggles with writer’s block and forbidden love in his own life to create Romeo and Juliet. That aligns itself rather uncannily with the fortunes of Chown, a Vancouver-born National Theatre School grad who caught the eye of director Cloran when he was playing Romeo at Vancouver’s Bard on the Beach a summer ago.

The way Cloran tells it, for the Citadel’s Toronto auditions Chown’s name was submitted for Kit Marlowe and a couple of the other characters in the play. “Andrew auditioned just before the lunch break, and did a good job…. I went down the street to grab some lunch. And when I got back he was still there, sitting outside the theatre. And he said ‘you have to see me for Will!’.” So Cloran did.

“Fair enough,” laughs Cloran. “His tenacity impressed me. And then, well, he was great!”

Shakespeare has always been part of Chown’s theatre life. “My introduction was Hamlet in Grade 7,” he laughs. The drama teacher was a sports guy who would have none of the usual jock stereotypes that divert boys from theatre. “There’s going to be sword-fighting. And you’re gonna get to die!”

Chown, who grew up in Oakville, Ont. — “I always say I was born in B.C. because I think it makes me sound more interesting” — was hooked. By high school he was at Shakespeare camps at Stratford nearby. “I’d be happy to do more Shakespeare; the breadth of experience it touches on is so beautiful!”

A playwright himself (his solo show Canine was at the Toronto Festival of Clowns), Chown comes to Edmonton from the Soulpepper production of Vern Thiessen’s Vimy.

“It’s a love story first and foremost,” says Chown of Shakespeare in Love. “And it’s an ode to theatre and to the misfits trying to put on theatre…. Even in the most dramatic moments, there’s always comedy. It’s a lot of fun. And there’s heart.”

In the course of the play “Will matures as a person, and accepts that some loves don’t last. And he matures as a writer. Later, when he’s heartbroken, it’s pouring out of him; he’s able to translate his experience….”

“It’s a coming-of-age tale,” says Chown. “He’s Romeo at the beginning. He’s Shakespeare at the end.”