The sounds of music: a strong cast of singers climbs every mountain

Jill-Christine Wiley as Maria with the Von Trapps, The Sound of Music. Photo by Matthew Murphy.

In the world catalogue of “favourite things” The Sound of Music gets its own gold star.

Just mention brown paper packages tied up in string, or goatherds, and something magical happens. The 1959 Rodgers and Hammerstein musical — the last collaboration from the most successful musical theatre partnership in history — is conjured before your very eyes and ears. Its tunes, its images, its mantras about mountain climbing and stream fording …The Sound of Music isn’t just memorable; it’s actually embedded in the collective psyche.

So in the great scheme of things, revivals of the musical don’t have to exert themselves much by way of character or  dramatic storytelling. You can get by on mere allusions to the plucky wayward postulant, the stern naval hero widower, the cute family kids, the Alps, the inspirational nuns, the Nazis. Really, just say Julie Andrews, close your eyes, and the hills are alive.

This by way of introducing the surprisingly deluxe touring Sound of Music that’s arrived at the Jube this week, under the Broadway Across Canada flag.

Its original direction was by Jack O’Brien, with his frequent design collaborators Douglas W. Schmidt (set) and Natasha Katz (lighting), Broadway heavy-hitters all. In this touring production, directed by Matt Lenz, we see a world fashioned from gliding set pieces, translucent lace walls, perspective projections. The action slides effortlessly from Nonnberg Abbey where the nuns are wondering what you do with a problem like Maria to the posh old-school Von Trapp mansion, where the stern patriarch has forbidden music (yeah, right, in a musical!), and back. The lighting captures the way dusk comes in the mountains and storms gather in exquisite effects.

Lenz’s production’s main attraction, though, is a cast of exceptional singers who deliver the musical’s chief asset, its songs, with real mastery — in every role, not just Maria (Jill-Christine Wiley) and Captain Von Trapp (Mike McLean). In embracing the musical theatre and folkloric tunefulness of Rodgers’ score, the cast somehow avoids the easier temptations of pop slides or operetta quavering. And they do sound of the period, the 1938 Anschluss as the Third Reich arrives in Austria.

You can’t possibly not know the story, based on Maria Von Trapp’s autobiography. It follows the fortunes of the free-spirited Maria, a peppy postulant who gets the boot from the abbey to be the governess to the seven children of the wealthy autocratic Georg Von Trapp. He’s a martinet (and staunch Austrian nationalist) who’s estranged from both his kids and music at the outset.

Music is the great liberator, in both the story and the Rodgers and Hammerstein musical it rescues from saccharine overdose. Maria teaches the children songs like Do Re Mi and The Lonely Goatherd. Music pries Georg from his carapace of grief — and his engagement to a wealthy oligarch — into family-friendly mode. And, as Maria wins him over to both music and fatherhood and they fall in love, music saves the Von Trapps, now a successful chamber choir with an fairly oddball family act. They take Climb Every Mountain to heart, and vamoose over the Alps to Switzerland in the nick of time.

The heart of the piece is Maria. And in a very spirited performance, Wiley brings an unerringly lovely crystalline voice to bear on My Favourite Things (here transplanted from its usual placement o be a bonding moment with an unexpectedly frisky Mother Abbess (Lauren Kidwell), The Lonely Goatherd, and the rest of the score. 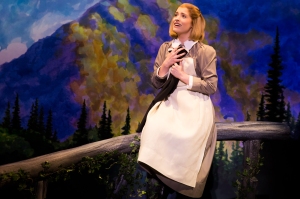 Jill-Christine Wiley as Maria, The Sound of Music. Photo by Matthew Murphy,

This Maria is nothing if not a lively governess. The performance is highly watchable, but from the moment Maria arrives chez Von Trapp, in a high state of showbiz bustle, it seems possible that the nun-to-be has spent a lot of time as an adrenalized kindergarten music teacher. And something, perhaps, of Maria’s sense of discovery of her own strengths doesn’t find traction. It’s already well established. Salzburg Festival here we come.

But then, that seems to be the heightened acting style for everyone (something in the water at the abbey, perhaps?). Vivacity rules. But then, who’s going to deny Austrians an extra quotient of double-takes in 1938.

As the world knows from Christopher Plummer’s appearance in the 1965 movie, Von Trapp doesn’t have to be a great singer,  McLean is excellent, though. And while all personal transformations, including his, seem a little quick — half a musical phrase and the Captain is a new man (OK, musicals don’t have all night) — you do feel the chemistry heat up between him and Maria.

Melissa McKamie has a glittery charm as the wealthy fiancée Elsa, unusually animated here. And in tandem with Jake Mills as semi-shyster music impresario Max, How Can Love Survive? (a witty ode to romance up against it when lovers are rich instead of poor) is genuinely fun. 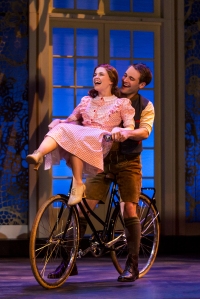 The children are individualized amusingly here, even if they don’t seem to require much coaching to be terrific singers. There’s nothing tentative here. The first-love scene between the eldest, Liesl (Keslie Ward), and Rolf (Chad P. Campbell), with its liltingly melodic song Sixteen Going On Seventeen, is reinvented in a charming way.

It’s a luxury to have such vocal excellence, through and through — especially in a musical without a chorus or big production numbers. Even when the story is only sketched in, the songs are delivered in a way to be cherished, as the rush to a standing ovation on opening night attested.

And Kidwell delivers Climb Every Mountain with such a thrilling , house-filling command that you feel sure the vibrations can be felt across Europe. You’ll take them home in your ribcage.

And the next day, as I can attest, they’re still there.

This entry was posted in Reviews and tagged 12thnight.ca, Broadway Across Canada, Edmonton theatre, Jubilee Auditorium, Rodgers and Hammerstein, The Sound of Music, Von Trapp Family Singers. Bookmark the permalink.