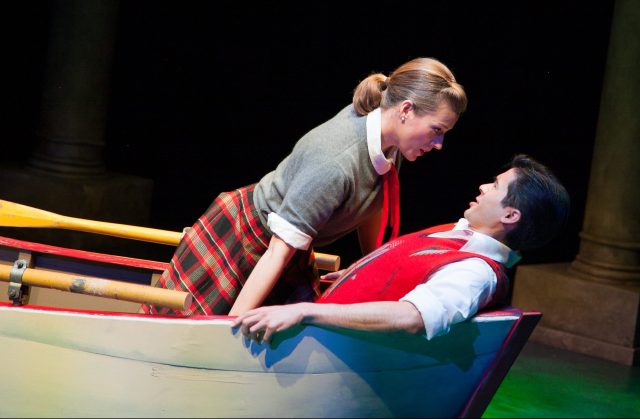 In 1993, a kid named Ron Pederson fell deeply in love.

The object of his affection struck him as funny and wistful, complicated but simple, and sad, a highly unusual kind of comedy. It had questing ‘50s characters, a trio just out of college, who find themselves in a knotty love triangle and somehow rise about it.

Pederson still remembers the wonder he felt seeing Stewart Lemoine’s Shocker’s Delight!, “staged on a runway” at an ex-artillery space just east of the old city market (the Phoenix Downtown). He read it. He dreamed about it. He floats the word “mystical” to describe this kind of attraction. 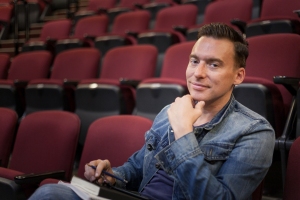 Ron Pederson at the Varscona Theatre. Photo by Mat Busby.

Eleven years later, when Pederson was living in L.A. working on the late-night FOX sketch comedy series MADtv, he was still regularly lobbying his Teatro La Quindicina pals for a revival of Shocker’s Delight!. Pederson laughs. “Is it time yet? Can we do it yet? I must be old enough now….”

And then he was. He came back from L.A. specially to be in a 2004 revival with Jocelyn Ahlf and Josh Dean. And now 25 years after that life-changing premiere, his appreciation undimmed, Pederson is directing his favourite play. Shocker’s Delight! opens Thursday as the Teatro season finale with a younger generation cast: Ben Stevens (For The Love of Cynthia) with Teatro newcomers Melanie Piatocha and Richard Lee Hsi. 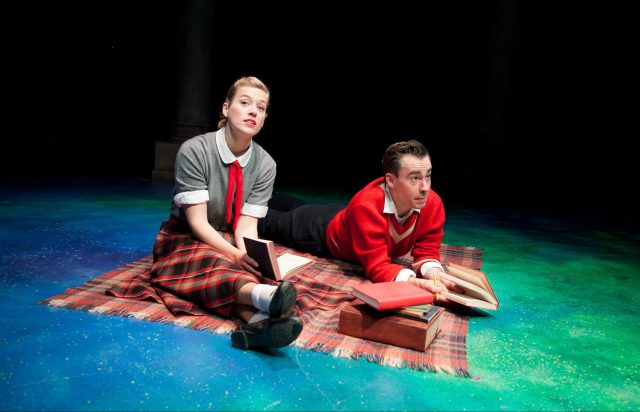 “So rich,” Pederson says of the play after rehearsal last week. “Great laughs, plot twists, highly romantic resolutions. A certain balance at the end…. It’s surprising; it sneaks up on you.”

Shocker’s Delight isn’t the first Lemoine that Pederson, Toronto-based, has directed; in fact, he’s made it a mission of sorts to bring the oeuvre of the Teatro founder, resident playwright, and muse to the east. “His plays should be picked up all over the country!” The Exquisite Hour, for one, (seen earlier this season here at Teatro) was the Lemoine he and fellow Edmonton ex-pat Daniela Vlaskalic, chose to launch their Toronto company The Theatre Department in 2012. Until that production, starring Vlaskalic and Ted Dykstra, Toronto hadn’t seen a Lemoine in 17 years. Pith! (directed in the end by Ron Jenkins) and the farce A Grand Time In The Rapids were other Pederson initiatives at disseminating Lemoine.

Pederson, who spent this past summer in the Freewill Shakespeare Festival repertory company and then Bright Young Things’ Fringe production of Sartre’s No Exit (his idea), arrived onstage as a kid in a way that was more like osmosis than career planning. By 14, he was skipping school so much to watch director Robin Phillips’ rehearsals at the Citadel, that he ended up in Oliver! and The Music Man.

His history with Teatro isn’t archival pinball. It’s more like a calling; Pederson has often called Teatro his education. The young Pederson of 1993 had already been in such Lemoine comedies as The Spanish Abbess of Pilsen (as a Gypsy sidekick named Jaunty, a nickname that stuck with him for years). He’d seen Lemoine’s Two Tall Too Thin, a curious comedy about the romantic and aspirational entanglements of Siamese twins and The Book of Tobit, (“a crazy imaginative play!”). The Fatty comedies, specially written for him by Lemoine — Fatty Goes To College and the rest — were still three years away.

And so was a long string of roles Lemoine custom-made for Pederson who, from the start, seemed to have a natural instinct for styles and cadence and timing. His first paid pro gig was a Lemoine: in Neck-Breaking Car Hop; he played Mitchell Styx, the ghost of a guy who died when the title car hop stuck his head in a deep fryer.

Improv has always figured prominently for Pederson, both in acting and directing. Witness his Die-Nasty affiliations, and then,  in Toronto, The National Theatre of the World. That’s the dexterous much-travelled company that, impossibly enough, improvises whole plays by famous authors — Miller, Ibsen, Tennessee Williams, Tony Kushner among them (“a Strindberg Halloween special!” he laughs) — under the title Impromptu Splendour.

“I learned so much about storytelling!” declares Pederson, who directed, made sets (“have you ever tried to find a hay bale in Toronto in February?”), set up an onstage phonograph for scoring. He’s amused to remember one Impromptu Splendour  excursion to the improv stronghold of Chicago. The playwright of the night? French-Canadian star Michel Tremblay. The Time Out Chicago reviewer expressed his initial disappointment (“who the fuck is Michel Tremblay?”), then admitted that by the end of evening he was moved to out, buy some Tremblay plays, and find out more. Pederson finds that highly gratifying.

“It’s conjuring,” he says of a venture that, like Lemoine’s evocation of Hitchcock thrillers in Evelyn Strange, is always more about homage than parody. “I’m a big proponent that improv is an evening in the theatre!”

Pederson thinks there’s a quality of improv, a certain spontaneity, that animates Lemoine comedy, Pederson thinks. “Maybe the velocity with which he writes carries into it? Improv is somewhere in the DNA of it, the moving forward, the sense of rising to the occasion, the bubbly matrix of the dialogue….”

And ahah, as Pederson points out, the playwright’s musical choices for scenes and transitions in Shocker’s Delight! are from Schubert Impromptus.

If Lemoine comedies turned Pederson into an actor, they’ve invited his analytical skills as a director. He loves their literate wit, their dialogue, plots that happen onstage, scenes between people.

In this respect, the comedies of Neil Simon cross his mind. Pederson is in an exclusive showbiz subset: “In high school I was a Neil Simon nerd,” he grins, bemused at the image. “Maybe because of the movie The Out of Towners?  His first foray into directing was The Last of the Red Hot Lovers (“it always makes me laugh….”) He says he’d like to have a crack at directing Simon’s The Prisoner of Second Avenue.

Pederson, who was in the Stratford Festival company in 2013), cites Stratford artistic director Antoni Cimolino’s idea of “the science of comedy.” and the notion of “taking the fat out” of an equation to arrive at elegance. Which brings him to his continuing admiration for the late director Robin Phillips, who was all about removing clutter, and the merely decorative. 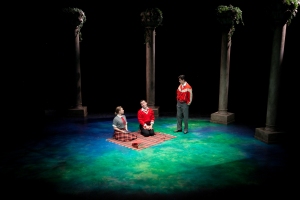 And that brings him, by a typically Pederson kind of free association, to the Biedermeier furniture that’s a strand — along with golf and ballroom dancing — in Shocker’s Delight! “Simple, elegant lines, free of spurious decoration,” as Pederson puts it. “The answers are inside of the play. Organic. Daoist. You don’t have to struggle…. It’s like music that way.”