Play the Fool sends in the clowns 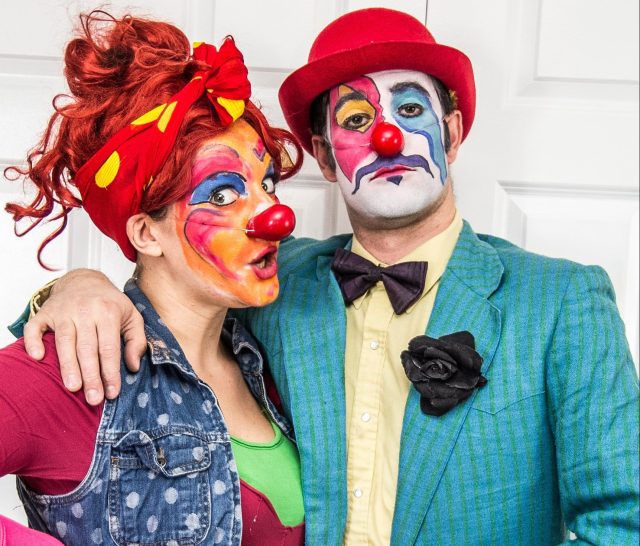 “Those that are fools, let them use their talents….”

An outbreak of clowns is at hand in this theatre town. And, as you’ll see at Play The Fool, the “festival of clown and physical comedy” running through Sunday at L’UniThéâtre, they come in every size, shape, and disposition, from the round-eyed innocent and antic prankster to the macabre Euro-brooder.

True, “the red nose is a good indicator” of clown identity, as Play The Fool artistic director Christine Lesiak says. But, as the re-naming of the festivities from last year’s debut Edmonton Clown Festival hints, “the art of clowning” has a wider, more elastic embrace than nasal ID. And Lesiak herself, a space physicist-turned-theatre artist, is proof of that.

Edmonton audiences know her from such clown alter-egos as Sheshells, in Small Matters productions like Fools For Love, or Aggie, the chatterbox advice guru who dispenses worldly counsel in the Ask Aggie shows that have toured the country’s Fringes. In late November at the Backstage Theatre, Small Matters explores mother-daughter relations in Over Her Dead Body, a new physical comedy à la Buster Keaton and Mr. Bean.

She finds that site-specific theatre — she’s been in Toy Guns Dance Theatre and Catch The Keys productions — that blithely ignores or eliminates the barrier between performance and audience is in synch with clowning.

“I tend to apply my training to theatre,” Lesiak says of her own clown proclivities. But “clown”  (“a trigger word,” as she says)  invites a wide and liberal application. Which may be why the Cirque du Soleil is scouting Play The Fool. “The Fringe program this year listed two shows as ‘clown shows’,” she says. “But I saw 15 shows I’d call clowning….”

So, the clown festival has become a festival of fools, or as Lesiak puts it, “the foolish and fanciful.” Unique in Western Canada (and only the third of its kind in Canada, after Toronto and Montreal), the festivities, 45 performers strong, assemble a mainstage lineup of three full-length shows.

One of them, Hushabye, was picked by all three Canadian festivals. Directed by Michael Kennard of Mump and Smoot fame, Jed Tomlinson and Jacqueline Russell star as Sizzle and Spark Fandango, in a dark comedy about family relationships and the relentless quest for the perfect life. “It is wacky; it is extreme,” says Lesiak. “Grotesque in the Mump and Smoot tradition….The birthing scene is worth the price of admission!”

Iman Lizarazu in Basquette Quese, at Play The Fool. Photo by Cornicello Photography.

A Banquette Quese stars the French artist Iman Lizarazu who, like Lesiak, was originally a scientists (she has a PhD in astrophysics from the Max Planck Institute). By every kind of antic ploy, “a clown is desperately trying to fall asleep,” says Lesiak of the all-ages show directed by Avner the Eccentric and Julie Goell, which has travelled the world since 2007. “Circus clowning, classical skills, within a narrative….”

The Monkey Do! International Collective is a trio of artists — Pratik Motwani from India, James Peck from the U.K. and Sarah Peters from the U.S. — all instructors at the Dell’Arte School in California. “Wacky. Very silly. They bring cultural lenses to their work,” says Lesiak of a show billed as “a daredevil freak show of magic, chaos, and sorcery.” 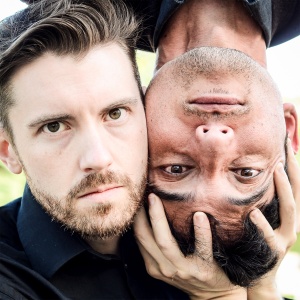 Since festivals in Edmonton work better when they’re rooted in the local, Lesiak has included an emerging artist series of triple-bills in Play the Fool. The lineup includes Mar and Briefcase, the clown alter-egos of playwright Jessy Arden and actor Carmen Nieuwenhuis (who brought the Fringe circuit a bona fide hit, Prophecy).

The Opening Night Cabaret is “a teaser,” says Lesiak. The Great Balanzo hosts.