From melancholy to mirth: The Malachites are back with Twelfth Night 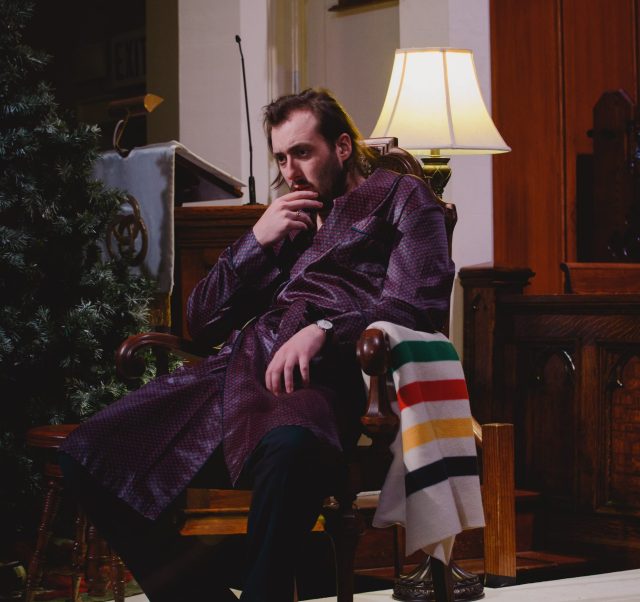 “What country, friends, is this?”

This is Canada, lady — as someone in these parts might have informed Viola, the shipwrecked heroine of Shakespeare’s Twelfth Night who asks the question near the outset. But The Malachites knew that, already.

They’re the English theatre company, based in the east London district of Shoreditch, who teamed up with Edmonton’s Grindstone Theatre and a cast of Canadian actors last year at this time to explore the moral ambiguities of Shakespeare’s ever-problematic Henry V. In a church sanctuary. In his first directorial outing in Canada, Malachite director Benjamin Blyth chalked up another first: Brynn Linsey was Canada’s first female Henry V.

Once more unto the breach: Twelve months later, the Malachites and Blyth are back. And this time the adventurous arts-friendly Holy Trinity Anglican Church — the Strathcona theatre destination where Henry and co. charged onto the field at Agincourt — has stepped up with a commission. Their choice? Shakespeare’s strangely multi-hued comedy Twelfth Night, with its dizzying identity crises, its crazy cross-gender disguises, its blend of mirth and melancholy, the comical and the tragic.

Alberta winter, in all its frozen-hearted rigour and sudden reprieves, has been a major inspiration for the production that opens Friday at Holy Trinity, says Blyth, in a celebratory mood (and not even wearing a coat) for a mid-rehearsal lunch earlier this week.

He’s assembled a cast of 12 Albertan actors (including Grindstone’s Byron Martin as Duke Orsino) for the production that opens Friday at Holy Trinity. “We’ve been about telling the story of Twelfth Night, finding what the location and the actors have to offer, notes that ring true for them” — in a production poised between  “classic and contemporary, heritage and present. Immediate!”

That fusion of old and immediately new and on-location is the specialty of the Malachites. They focus on the early part of Shakespeare’s career in Shoreditch — at the Curtain, the Rose, The Theatre — before the playwright and his company The Lord Chamberlain’s Men moved across the Thames to Bankside, and their new theatre, the Globe. Blyth, who has plans for a Romeo and Juliet on the site of the Curtain and a Taming of the Shrew in a medieval feasting hall at the Lichfield Festival, directed a summer production of Richard III on the excavated site of the Rose.

Written about the same time as Hamlet, Twelfth Night doesn’t fall into the Shoreditch category; it was first performed at London’s legal college the Middle Temple in 1602. But Blyth, whose bi-continental life includes PhD studies in early Shakespeare at the University of Calgary, has been fascinated by the comedy — and the way that initial melancholy and grief give way to joy. It strikes him as “seasonal,” and seasonal, as we know, is something of an Alberta specialty.

Twelfth Night “opens in melancholy gloom,” Blyth says cheerfully. And when Viola in male disguise and the twin brother she’s given up for drowned arrive separately on the shores of the mysterious Illyria, “gloom is gradually shaken off by love.…”

“Love cures people of narcissistic inward-looking self-love,” of the kind that has paralyzed the Illyrian elite. As the play begins, Duke Orsino is in love with being in love; the grief-stricken Countess Olivia obsessively mourns her late bro.

Colour splashes into a monochromatic world, says Blyth of a production that includes 50 frost-covered Christmas trees. “Illyria is a very cold, mystical space…. As the play warms up, winter is shaken off!”

And the music, live and with choral arrangements by Danielle LaRose, Blyth’s Canadian wife (like Grindstone’s Martin a Grant MacEwan musical theatre alumnus) who plays Olivia, shrugs off its sadder aspects too. LaRose’s score, Blyth says, is “a mixture of traditional English carol music — In The Bleak Midwinter, I Wonder As I Wander — and contemporary Canadian music from Rufus Wainwright, Leonard Cohen, k.d. lang (among others) that speaks to the journey of falling in love.”

“We’re trying to connect the soundscape to a classic text,”  he says of the Malachite production of a Shakespeare play notable for the quantity of music it contains. After all, the first line of Twelfth Night is Orsino’s celebrated sigh, “if music be the food of love, play on.”

The musicians are the cast. “I pined for a string quartet, but it was not to be,” Blyth laughs. Martin has spent two months improving his keyboard skills, the director reports. And the poet/actor/improviser Colin Mattie, as Feste the Fool, has learned to play the harp he carries with him through the production.

“I cherish the space, the freedom, the infrastructure,” says Blyth of the Holy Trinity commission. “There’s such a lot going for Edmonton as a creative hub.”

“It’s a lonely time of year,” says Blyth of the post-Christmas chill. And Twelfth Night, he thinks, is all about that feeling of lifting your spirits. “It’s such a joy to watch that happen.”