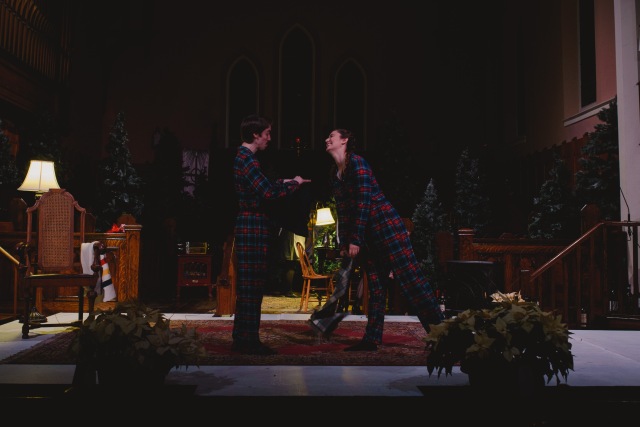 Wonder and confusion, sadness and joy, thread their way through a comedy that’s always catching you a little off-guard, like the post-Christmas (hangover) season of the year itself. So in a way, the built-in contradictions of Shakespeare’s Twelfth Night feel right at home in … a church.

And that’s where you’ll find Benjamin Blyth’s highly enjoyable Malachite Theatre production. It savours the contradictions: stained glass, walls lined with candles and wine bottles, Christmas trees everywhere and in every state of un-decoration including zero, at the altar and in the aisles. You can never quite figure out whether you’re outside or in-, in this version of a Shakespearean comedy that is perhaps the richest in household details of any in the canon. There are a lot of plaid bathrobes in the Twelfth Night conceived by the English company for a 12-member cast of Edmonton and Calgary actors — and they co-exist with toques, gloves, and Hudson’s Bay scarves and blankets

The production is full of music, of both the festive and mournful persuasion, Old English and Canadian (assembled and arranged by Danielle LaRose). And as the Fool Feste, the excellent Colin Matty is amused, but a little pained, by the folly he sees around him. He rouses himself to anarchic energy, but it subsides then returns — just like the play.

In a play with a fake priest, played by the Feste as the capper to the household’s revenge on its puritanical purse-lipped steward Malvolio (Brann Munro), there’s a real priest too. He’s played by Holy Trinity Anglican’s genial and hospitable Father Chris Pappas, who shows up with a wink and a wine bottle to do the honours when the Countess Olivia (Danielle LaRose) is getting hitched to the male half of a pair of twins (Andrew Cormier). And he charges down the aisle with full comic swagger after the happy couple. Talk about site-specific theatre!

Twelfth Night’s cross-currents of mistaken identity, romantic obsession and sexual confusion are set in motion by a shipwreck — and a choice: a young woman’s decision to disguise herself as a boy on the mysterious foreign shore where she lands. Viola (Merran Carr-Wiggin), half a pair of twins, becomes Cesario. And she lands a job as a love broker for a man she falls in love with, and inadvertently succeeds in attracting the romantic passion of the woman she’s courting by proxy.

Twelfth Night pushes the frontier of wonder, folly and comic confusion to the point that a woman reveals her heart to the man she loves, who’s really another woman in disguise, who is herself in love with a man who’s convinced he’s head over heels with the first woman. A web of comic complications ensues, as you will glean if you staggered through that previous sentence.

Carr-Wiggin as the resilient Viola/Cesario, finds her way through this maze with charm, innocent excitement, and a certain air of startled dread that is very funny, a kind of internalized double-take. The moment when she realizes the full measure of romantic chaos she’s unleashed is a little comic gem. “O time! thou must untangle this, not I; it is too hard a knot for me to untie!”

In LaRose’s appealing performance as Olivia, the carapace of grief and aristocratic hauteur is thin already and ready for the melting,  It doesn’t take much: one look at Cesario, and it vanishes entirely, uncovering a heart ready for love and lightness of being. As Orsino, Grindstone Theatre’s Byron Martin delivers an amusing portrait of an unravelling aristocrat wallowing in unrequited love; he never quite gets fully dressed, and flings himself into an armchair (with his Bay blankie) to revel in his tragical state.

Speaking as we are of revelling, the nocturnal party-hearty members of Olivia’s household — bar one — are all for extending the Christmas festivities indefinitely. “Let us therefore eat and drink!” As the booze-soaked sponge Sir Toby Belch, busy conning a rich ninny into spending his money, William Mitchell is unusually sweet-natured. I really enjoyed Perry Gratton as the dimbulb Sir Andrew Aguecheek, perpetually a beat behind in his comprehension of proceedings. And the “duel” trumped up between Cesario and the equally terrified Sir Andrew, played with hockey sticks in honour of the Canuck connection, is a hoot.

The chief instigator, and arguably the smartest character in the play, is Olivia’s maid/companion Maria. Monica Maddaford plays her with contagious zest, an appetite for amusement, and a lighthouse beacon smile.

Olivia’s stern, self-important retainer Malvolio, the butt of the household plotting, is here played by a female as a female. Munro’s Malvolio is a tiny buzzsaw with a slightly Teutonic accent. The gender switch works fine, though it’s not terribly clear in the production that this particular Malvolio is an authority figure who shuts down revelry, abuses power, and therefore deserves a come-uppance.  So the plot by which Malvolio is brought low seems reduced.

The scene in which Malvolio discovers a forged letter, and deduces that her employer fancies her is funny, though — not least because the plotters are hiding behind the Holy Trinity pulpit and the church plaque on which the hymn numbers are listed.

The capper to the complications is the arrival in Illyria of Viola’s twin Sebastian, played with a delightful sense of pinch-me-am-I-dreaming? wonder by Cormier.

In the end the outsiders in Twelfth Night can’t be contained by a mysterious comedy that’s simultaneously hopeful and nostalgic. Malvolio exits, swearing revenge on everyone. And Antonio (Evan Hall, in a lovely performance), the sea captain who’s felt cruelly betrayed by one twin he mistakes for the other, is in handcuffs, forgotten by everyone in the joyful reconciliation.

This Malachite production isn’t particularly attentive to either of these exclusions. It ends instead with a rollicking connection to the audience. It’s like Alberta that way, where “midsummer madness” as Olivia puts it, is a long winter’s dream.