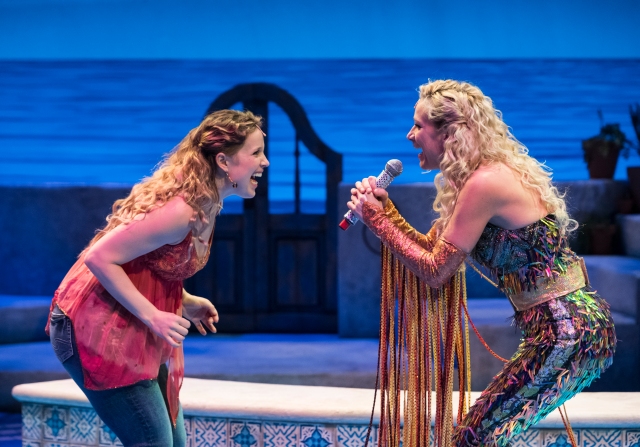 You can dance, you can jive, having the time of your life…

It is no surprise to find that the director of a certain big full-bodied jukebox musical — you may have heard of it — opening Thursday on the Citadel’s Maclab stage, loves the score.

After all, Mamma Mia! didn’t get to be a global phenom — a contagion in the world’s bloodstream that has never gone into remission — with songs that are in any way humanly resistible. The 1999 musical, which has grossed billions worldwide in a staggering array of currencies, gathered 22 ABBA hits and brought them to the stage. And it’s watched people dance in the aisles on six continents ever since.

There are those who consider ABBA a kind of airy pop confection. Not Ashlie Corcoran, the exuberant new artistic director of Vancouver’s multi-stage Arts Club Theatre. “The music is so powerful! And it’s not trivial music! ABBA’s music is actually quite complicated,” she exclaims. One of the country’s brightest new directing stars in both theatre  and opera, on stages of every size, Corcoran talks at a rate that suggests a secret hunch that the world will be ending soon. She made time in a crazily hectic bi- and tri-city schedule last week to (a) eat and (b) explain her enthusiasm for Mamma Mia!.

As Corcoran points out, “having a cast of 20, 20 voices!, means that the layering of harmonies is really sophisticated…. When people come to the show, they’ll realize there’s so much more singing than what’s happening onstage. As soon as they go offstage, everyone in the ensemble, principals too, finds a monitor and sings tracks.”

But Mamma Mia! isn’t just a concert, though it ends with one. As you might know by now, there’s a narrative to which the songs are attached, the inspiration of English playwright Catherine Johnson. Single mom Donna, who used to sing in a girl group, Donna and the Dynamos, now runs a taverna on a Greek island, a location which makes lighting designers world-wide very happy. Her daughter Sophie is getting married and, unbeknownst to her mother, invites three men who might be her father to the festivities. 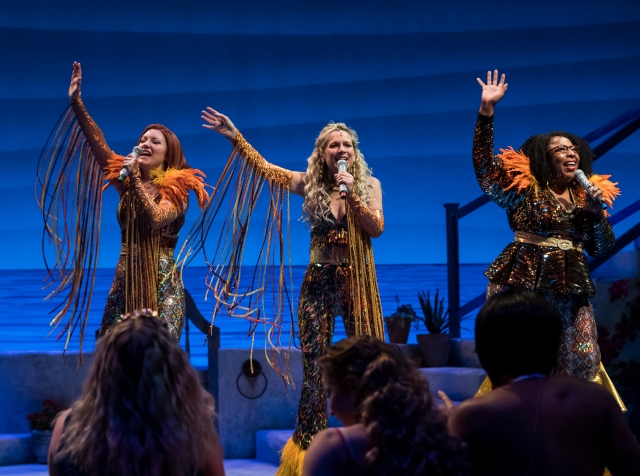 “Dramaturgically, it’s so well structured,” argues Corcoran. There are sets of three characters (three dads, the three Dynamos, Sophie and friends, her fiancé and friends); the relationships between the sets are quite Shakespearean. And the Aristotelian unities are observed: it “all happens in 24 hours, in one place. There’s really one plot, not a whole bunch of subplots. Everything drives towards Sophia finding her dad.”

“In addition to the music, which everyone knows, it’s a story about being a child. Or being a parent. And that’s a very accessible entry point: the complications of wanting freedom and also wanting to hold on to something, wanting to hold on to your child, and also knowing they need to go off into the big world….”

“A really strong narrative, and characters to root for. And then at the end, a concert. You get the best of everything…..” 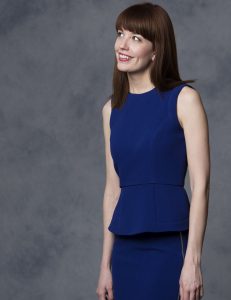 All this and nostalgia for your youth, too, a repeatable indulgence by definition. Corcoran’s Citadel production of Mamma Mia!, is the fifth to arrive onstage here since 2005 to remind Edmontonians who they were (and were with) when they first danced to Super Trouper or heard that fateful slide in Dancing Queen.

And you could even argue for a certain inevitability: In Stockholm’s ABBA Museum, which opened in 2013, Edmonton figures prominently. There’a mock-up of the change rooms at the Edmonton (then) Coliseum where ABBA launched their final world tour. As Benny and Björn, those Swedish philosophers, have said, “And here we go again, we know the start, we know the end.”

Corcoran, originally a West Coast-er from White Rock, arrives back in B.C. at the mighty Arts Club — Vancouver’s largest theatre company with a $13 to $14 million budget (a little bigger than the Citadel’s $11 to 12 million)— from five seasons as artistic director at the Thousand Islands Playhouse in Gananoque, Ontario. The regimen there of back-to-back productions April to October gave Corcoran, as she says, “the opportunity for breadth of programming.”

From Corcoran you won’t be hearing lamentations, endemic to regional theatre artistic directors, about the oppression of serving up something for everyone. You’ll hear broad-spectrum enthusiasm. “I love all kinds of theatre. I’m so thrilled to be directing Mamma Mia! right now! One of the projects I directed this year was about the Syrian conflict, and I loved that too. I love directing opera, one-person shows, classics, new work. And as an audience member I love going to all these kinds of shows too.”

Corcoran’s choices in Gananoque reflect that perspective. Ron Pederson directed Stewart Lemoine’s farce A Grand Time In The Rapids there in 2016. Two seasons ago, a lineup that had begun with A Closer Walk With Patsy Cline, ended with a contemporary  German play, The Thing (Das Ding). “They couldn’t have been further away from each other!” says Corcoran happily.

Which brings us to Corcoran’s other company, Theatre Smash (“my baby theatre), which she started in order to “do contemporary plays from around the world that haven’t happened in Canada before.” Like Citadel artistic director Daryl Cloran, a close friend from college days, Corcoran is drawn to make international connections.

Das Ding, for example, which introduced Toronto audiences to the work of innovative young German playwright Phillipp Löhle, was the show Theatre Smash brought to its two-year residency at Canadian Stage.

Mamma Mia! is her fourth production since Corcoran left Gananaque in October: The Canadian Opera Company’s family friendly The Magic Victrola, The Electric Messiah (“Handel’s Messiah but in a bar”) at the Drake in Toronto, a Tarragon remount of Mustard by Kat Sandler, the playwright also favoured by Cloran, who will premiere not one but two new Sandlers next season.

Last Monday, the traditional day-off in theatre world, was the first since Mamma Mia! rehearsals started that Corcoran hasn’t flown back to Vancouver for the day to make plans at the Arts Club. Instead she went to the wave pool at WEM to re-read Thornton Wilder’s The Matchmaker.

It’s one of three shows the indefatigable Corcoran will direct in her first season at the head of the Arts Club. She’s programmed 18 productions for that 12-month-a-year operation, divided amongst three resident stages and a tour (this year, Onegin), and starting with her own production of The Curious Incident of the Dog in the Night-Time.

And it includes a striking number of co-ventures with the Citadel, including Lynn Nottage’s Sweat and Matilda the musical, as well as Hardline Theatre’s Redpatch. In fact, Hardline will be the resident company at the Arts Club for the season — a way, says Corcoran, of paying forward Theatre Smash residencies with larger companies. 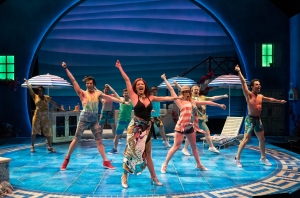 Meanwhile Corcoran is in Edmonton, where the only production of hers to play before now has been The Gay Heritage Project, at the Citadel Club in 2016. The last time she directed a big musical was at the Shaw Festival in 2017: the 30s charmer Me And My Girl. And she wrapped her considerable wits around The Lambeth Walk, the jaunty Act I closer number that started a multi-continent dance craze in 1937. In that contagious dance-y-ness at least, it has a link across the decades to Mamma Mia!.

“The Maclab is a big theatre but feels so intimate,” says Corcoran. “You can feel the heat off the actors and see them breathing. No chance to stop and re-set, so there’s a virtuosity about it.”

“With Mamma Mia! people are coming to see a show they know and love. But we want to surprise them, too.… I’m having so much fun that I’m using my air miles to fly my parents up (from Arizona) for opening night!”

Corcoran’s favourite ABBA song? “In the evening I’ll put on some ABBA Gold, and I like some of our fuller arrangements better! I really love our version of Name of the Game. Under Attack was my least favourite when we started. Now it’s definitely one of my favourites….”