Gimme gimme gimme … the past! How can I resist you? Mamma Mia! at the Citadel, a review

“We’ve done it all before, now we’re back to get some more….”

Mamma Mia! There: you’re looking at two words that, just on sight, will weasel their way into your brain, and unlock an entire archive of blissful ABBA hits — not to mention the memory album in which your younger, trimmer, more glad-hearted self is dancing fab platform boots and conjuring fun gone by.

Which is, after all, the main point of a canny 20-year-old world traveller of a jukebox musical that’s a virtual guarantee of money money money at the box office (oops, that’s the other point, directly related to fun).

Never underestimate the power of nostalgia. Especially in an pleasant setting, with pleasant costume choices that include, as a bonus, buff guys dancing in their bathing suits. No matter what your rational views of the ABBA canon — a manufactured Swedish confection from the 70s that’s lighter (and sweeter) than the national meatballs — it’s the guilty-pleasure soundtrack to something you secretly think you might have lost.

And I was reminded of that at the Citadel this week, at the enthusiastic full-house preview I was kindly allowed to attend. Twice, as an intermission passerby, I got asked to take a cellphone photo of clusters of women looking happy and hoisting glasses of wine in classic Dancing Queen posture.

Mamma Mia! doesn’t shirk its god-given duty as a jukebox musical to spin a storyline thin and bendable, OK generic, enough to string 22 slick, ridiculously catchy ABBA hits together — without even changing the lyrics. And Corcoran’s joyful production, with its cast of theatrical super troupers and a first-rate band led by Don Horsburgh, doesn’t shirk its own duty: to deliver the hits in a fulsome way while trying to conceal the dramatic flimsiness of it all — except, that is, when it actively embraces that thinness and has spoofy sport with it.

In 1999 Brit playwright Catherine Johnson hit gold with this serviceable and non-taxing premise: a wedding on a Greek island. Donna (Patricia Zentilli), a spirited single mother who used to sing in a girl group, runs a taverna. Her 20-year-old daughter Sophie (Tess Benger), who has for some reason a compelling need to know her dad’s identity (“my whole life has been one unanswered question!”) has nicked her mom’s diary and secretly invites three possible fathers to the wedding. She gets to sing I Have A Dream as she mails the invitations.

And there you have it: the plot that the songs have to attach themselves to.

For once, Sophie and her beau Sky don’t look like they’re 30-something survivors of gruelling one-night tour stops in Wichita and Winnipeg. Berger is a wide-eyed charmer with a genuine sort of innocence, and the performance by Michael Cox gives off the guileless air of the sweet, nerdy  guy in your Grade 10 math class.

As of the preview, the breathless high spirits and hyperactivity of the opening scenes, which involve a lot of arrivals of friends and dads and shrieking and ricocheting through the taverna, seemed a little forced, even by the heightened standards of jukebox artifice. Who, you wonder, put the Red Bull in the blue waters of the Aegean? I’m imagining that the performances will acclimatize.

But then there’s Donna. Zentilli, who’ terrific in every way, negotiates an impressive combination of starchy self-determination and vulnerability as the ex-boho mother with a double trauma. She’s about to lose her daughter not only to marriage but to the conventional white wedding scenario. And she’s suddenly confronted after two decades with three men she thought confined to the past.

The three dads, as written, are a quirky high-contrast trio; Donna’s taste was evidently eclectic . And there’s unusual acting heft in all three performances: John Ullyatt as Sam the architect; Ashley Wright as Bill, a self-regarding travel writer; Leon Willey as Harry, whose main — well, only — feature is being English. 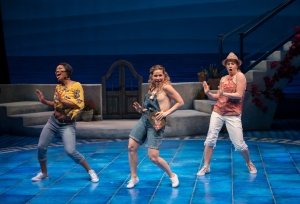 Great cabaret singer as she is, Zentilli applies herself to the songs with dramatic skill and attention they don’t invariably deserve — without squashing them.

But I still find that what’s fun about Mamma Mia! are the playful scenes that don’t take themselves (or the premise to which they’re attached) very seriously. Ah, or even grin at their own preposterous brio, a quality reflected in both Laura Krewski’s witty and contagious choreography and Sincennes’ flamboyant resort costumes.

Corcoran’s ingenious stagecraft on the thrust stage that we surround — it is, after all, an island — includes consistently amusing use of a bed that rolls into the scene like the prop, metaphor, and bandstand it is. You’ll be captivated by the scene in which Donna’s erstwhile band-mates reach into the tickle trunk of their old costumes, which they use as a shameless excuse for an impromptu version of Dancing Queen. They deliver and they have larky fun with memories of their former selves.

There’s a funny pageant of guys in flippers, slapping their feet across the stage, as an excuse for Lay All Your Love On Me. And as for Under Attack, well, I won’t spoil the fun of the sight gag, as Sophie’s nightmare comes to life around her spinning bed.

If you’re a multi-time Mamma Mia! fan you’ll be saying ‘tell someone who cares,” but to me the self-dramatizing, tortured numbers where the show takes itself seriously and gazes tragically off into the mid-distance are hard work. Chiquitita, smartly staged, is one; despite the charismatic talents of Zentilli both as a singer and an actor, The Winner Takes It All, is another.

Kudos to Ullyatt, whose dramatic and musical chops are second to none. He actually manages to make the Knowing Me, Knowing You number make some sense, in a context that’s usually faintly embarrassing. As ABBA wisely tells us elsewhere, “don’t go wasting your emotion.”

Anyhow, what you’ll find at the Citadel is a production that looks and sounds dreamy, has a veritable barrage of sequins at the end, and tickles you to remember yourself. Indelible tunes, performed by the best musical forces around: “how can I resist you?”