The fun of Oy-rish charm: Outside Mullingar, a review 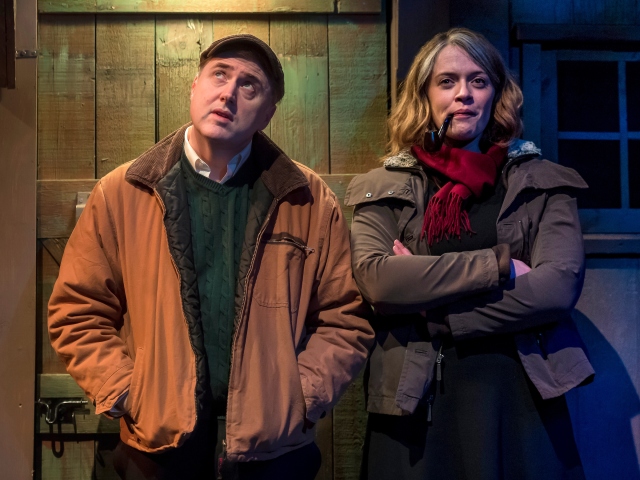 The fabled Irish countryside connection between man and The Land has a kind of crackpot quirkiness in this charmingly wispy 2014 Oy-rish rom-com by the redoubtable American playwright John Patrick Shanley, of Moonstruck and Doubt fame.

And John Hudson’s Shadow production of Outside Mullingar, led by the most charming of duos Jenny McKillop and Garett Ross, goes along with the sport of this highly enjoyable repository of Irishness.

Peppered with Shanley’s jokes about Irish morbidity, eccentricity, and the storied Emerald Isle lyrical streak, the framework is a feud. And it’s about The Land. The Muldoons and the Reillys have lived for years on side-by-side farms. And for the last 30, they have taken sustenance from an argument about a strip of land between the two.

Designer Daniel Van Heyst provides a movable piece of Irish Lego cottage real estate, that reconfigures itself into kitchens and porches belonging to one party or the other (lighted by Ami Farrow).

The latest from the feud — as we learn in the divertingly non-stop looped arguments of the long introductory scene — is that Anthony (Ross), a lugubrious 42-year-old with a perpetual defeated slump to him, is about to be denied his rightful inheritance of the Reilly farm by his energetically feisty old widower da (Glenn Nelson). 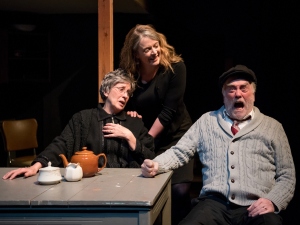 “You take no joy in it,” declares the old codger defending his decision. “You don’t stand on the land and draw strength from it.” He’s also critical of Anthony’s resemblance to the Kelly side of the family. And Kelly is so cracked he “put his dog on trial for slander.”

Even tart-tongued old Aoife Muldoon (Coralie Cairns), a widow of three days standing, is appalled by this wayward behavior of a father toward a son. She’s in old Tony’s kitchen having a lengthy gab with him. They are discussing, yes, The Land, funerals, and their imminent demises and other larky Irish matters. “Was I only born to bury and be buried?” she asks rather cheerfully. He agrees. No subject is too grim for the Irish sense of humour.

Anyhow, Anthony’s opposite number in the Muldoon clan is Aoife’s daughter Rosemary (McKillop), a sparky pipe-smoking Irish lass who berates the chronic bachelor for his damp and spiritless melancholy.  ““I’m more with nature than people,” he says morosely. “You’re a bit of a lump,” she retorts. “You’ve got to push back.”

She doesn’t hate Anthony, she explains. She just doesn’t like him, and has had a grudge against him since he pushed her down. Age six. Ah, there’s Ireland for you.

Naturally, this being a romantic comedy, the hostility and incompatibility set forth here means that Rosemary and Anthony are destined for each other. If rom-coms are all about the obstacles between two parties who are clearly, inevitably, meant to be together, you have to hand it to Shanley. He serves ‘em up and keeps ‘em coming in Outside Mullingar.

There’s temperament, there’s resistance, there’s opposing attitudes to, yes, The Land (turns out Rosemary owns the disputed strip). And then there’s a sudden turning into the utterly wacky with a “dark secret” revelation that no one could possibly see coming . Which isn’t really fair. But, damn, it’s just so kooky it stops you in your tracks, which may not be something you should be doing in the middle of a play.

Anyhow, on the one hand, we have a man who looks at the ceaseless downpour outside and notes that it’s “a great day for the rope.” Ross is excellent at creating a portrait of a sensitively morose soul in a state of perpetual, and indeed philosophical, sorrow. “Is a man who does what he must though he feels no pleasure less of a man than one who’s happy?” Anthony wonders this. And Ross is just the actor to fashion this existential position into a comic character.

On the other we have a woman who is animated by her loneliness into a state of exasperated desperation — and is brave enough to take the first steps toward confessing it. And McKillop is lovely, and funny, as the woman who briskly wrestles doubts, his and hers, to the ground, in a last flying leap towards happiness.

The scene in which the pair finally, fatefully tangle is a comic gem of advances (hers) and dim incomprehension (his). And romantic to boot: love as an achievement under the circumstances. They earn their Guinness.

The actors, including Nelson and Cairns, enter into the jaunty gallows humour of Shanley’s American compendium of everything Irish, in an Irish accent (and here for St. Paddy’s Day). It never seems quite real, except when the McKillop/Ross chemistry takes over. But reality isn’t really the point. Something more like storybook charm is the point.

I mean, how can you resist a line about a dour someone who “only loved life when he was in bed. Or eating beef.”