The theatre of the supernatural: Cat Walsh’s Do This In Memory Of Me, a review 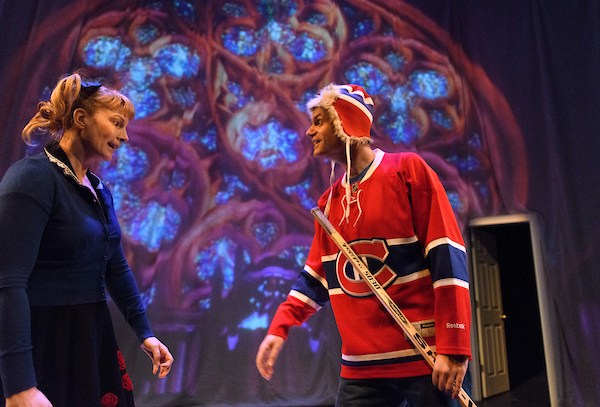 Nicole St. Martin and Steve Jodoin in Do This In Memory Of Me, Northern Light Theatre and L’UniThéâtre. Photo by Epic Photography.

Do This In Memory Of Me, a strange and captivating new coming-of-age comedy by Cat Walsh, takes us into the richly decorated, permeable mind of a highly imaginative 12-year-old Catholic girl.

Geneviève’s is a mind with an open door policy, invaded by lurid imagery, grotesque pageantry, decapitated saints, the mysteriously undead dead —  interchangeably with Geneviève’s dad making prosaic demands about school lunches. And since it’s the ‘60s in Montreal and the world is changing, the expansive world of Geneviève’s mind includes vistas from the the starry firmament and flying Russian dogs circling the earth in space ships and challenging the idea of heaven.

This kind of sensory free-association is a challenge, and an invitation, to the joint forces of Northern Light Theatre and L’UniThéâtre. And the ingenious theatricality of this premiere production directed by Trevor Schmidt, with its wonderful projections by Matt Schuurman and eerie soundscape by Darrin Hagen, embraces both raucous comedy and a kind of spooky magic.

Religion is a theatre of the supernatural, after all. And one of its most enduring attractions  is the possibility that death isn’t final, that prayer works, and the invisible has stage presence.

Nicole St. Martin in Do This In Memory Of Me, Northern Light Theatre and L’UniThéâtre. Photo by Epic Photography.

Schmidt’s design is a simple chamber with two doors, as in  Roman farces, embedded in a tall curvilinear curtain. And the traffic through the doors, and the play of Schuurman’s projection-scape across the curtain — above the earth, underwater, in Geneviève’s mind, in church — is constantly surprising and fun. Geneviève’s agile mind is lighted by Beth Dart.

Back to the story and her predicament. Geneviève’s dream is to be an onstage player in the theatre of the church, as an altar server. She’s rehearsed the choreography (“turn left, genuflect, put the bells down quietly…”). And then Geneviève (Nicole St. Martin) comes up smack against the no-girls rule of her parish, as reinforced by the ancient wheezer Father Paul (Brian Dooley in fine comic fettle). He permits himself a flicker of incredulity at the request before he returns to his continuing campaign for a boy to fill in for his star altar boy Martin (Steve Jodoin). After all, as Father Paul points out, Jesus chose 12 men to be his disciples; if he’s wanted a woman he’d have recruited one.

She prays for an exemption from the rule. She has deal-making conversations with God, a sort of 12-year-old French-Canadian Catholic Tevye. If you’ve ever wondered whether your prayers are getting duly processed up there, or tossed into some sort of bottomless to-do bin and forgotten, or they’re just dissolving into the ether as you formulate them, this is the play for you. And Geneviève is a girl after your own heart.

There’s a kind of freewheeling imaginative energy to this that blithely dispenses with segués, and Walsh is a funny writer. God is being maddeningly close-mouthed. But St. Pancras of Rome, an obscure patron saint of children, shows up. He turns out to be a rather riotous and sulky 14-year-old martyr who cracks wise, shows off his decapitated head, and airs at length (possibly a little too much at length) his own grievances about his relative obscurity in the modern competitive world of saints. “I’m very popular in Europe.”

Her mom’s continuing absence is a mystery on which Geneviève’s dad (Dooley) can’t or won’t shed any light. But when lead altar boy Martin vanishes on the way home from hockey practice, Geneviève’s prayers seem to have been answered, in a particularly lethal way. Is she guilty of inciting divine intervention? Is her mother’s absence a coincidence? Is the adult world not only obstructionist by evasive? Something happens to open Geneviève’s eyes to the disconcerting possibility that certainty is an illusion. There are some questions — even simple ones like “where’s mom?” — that just remain unanswerable.

As a plucky, curious, quick-thinker of a kid, Nicole St. Martin is winsome. You have to respect the way her pigtails quiver responsively in indignation when she’s up against injustice. As the breezy Martin, never seen without a hockey stick in hand, Jodoin is very funny. And Dooley turns in detailed performances on the obverse sides of the paternal coin: the sad, struggling father and the change-resistant old Father. Geneviève’s dad is a particularly touching portrait of a man who can feel his credibility, and authority, slipping away.

Life is mysterious. The great big world, with its connections to the invisible, is full of proof of that. What you lose in certainty, you gain in possibility. And the crazy beauty of that thought is where the play and this playful production come together.

Do This In Memory Of Me/ En mémoire de moi

Running: through March 25, alternate performances in English and French