Check in at the Hotel Vortruba! A guest 12thnight Fringe review by Alan Kellogg 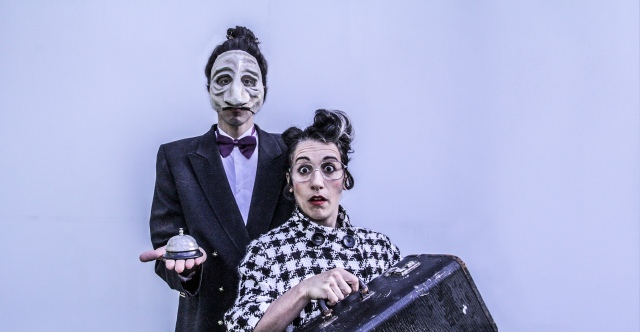 Welcome to the Hotel Vortruba. You can check out any time you want — but you’ll never want to leave.

Vancouver’s RAGMOP Theatre, who dazzled audiences here last Fringe with Falling Awake, isback with a terrific new production that falls under the somewhat dry rubric of physical comedy, but in fact expertly skips across the genres to delightful effect.

Nayana Fielkov, her character shlepping a road-weary suitcase, resplendent in a double-breasted houndstooth coat — and coming off like a particularly manic Roz Chast character with a Bride of Frankenstein coiffure — has a bit of a time attempting to ding the hotel desk bell. It happens, after a series of yuk-laden  turns.

From the depths of the check-in counter emerges limb by limb the long, lanky form of her innkeeper, played by Matthew “Poki” McCorkle, who sports a dubious tux and Phantom-style mask. Outside, the elements are howling, along with occasional stage smoke (that produces a different sort of effect here in Hades this week, but still works). Throughout the story, the two emit a wide variety of sounds — singing wordlessly Cirque-and otherworldly-style, gurgling, muttering, grunting, gargling and more. Only very rarely ( as Mump and Smoot do so well)  do they break into a word or two of English, and to hilarious effect. The audience is enlisted at times to help out, and that works, too.

It seems wrong to go into much detail about the vignettes forever kinking the normal comings and goings of a hotel sojourn. Bending the quotidien dross is a huge part of the charm here. And the two (along with an unforgettable mechanical friend) roll it off with consummate dispatch. The staging involving multiple moveable carts is particularly innovative.

The pair are also impressive magicians, as you will discover. But I will say the pas de deux with a certain creature supposedly rare in this province marks a kind of theatrical first. While we’re at it, let’s toss a bouquet to Soren Olsen, who co-directed with the cast and delivers a first-rate sound design.

We don’t do stars around this operation. But this is about as entertaining as it gets at any Fringe, anywhere. Book it.

This entry was posted in Uncategorized. Bookmark the permalink.