In a cabaret past the end of the world, Roy Versus The Red Baron. A Fringe review 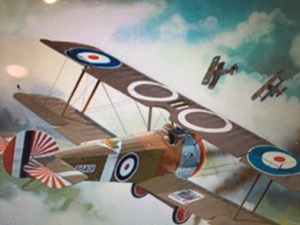 Roy Versus The Red Baron. Photo from program.

In an officer’s mess past the end of the world, where history goes to let down its hair and have a few drinks, two mortal enemies of a war a century ago are carousing, singing, playing with toy planes together, and needling each other.

One is the German aristocrat Baron von Richthofen, the Red Baron, the most famous and fearsome fighter pilot in the world. The other is the polite self-effacing Canadian flying ace from small-town Ontario (and then Edmonton) who shot him down over the Somme. Even his name is self-effacing, and you might not know it: Roy Brown.

In this spirited new “fantasy cabaret” by Kenneth Brown (who directs and is onstage at the keyboard), Zachary Parsons-Lozinski and Andrew Gummer play the sparring partners. And a study in contrasts they are, as conjured by two exceptional singing actors. Von Richthofen (Parsons-Lozinski) the breezy, witty Euro-bon vivant, bemused by the modest good manners and naiveté of his polite Canuck counterpart (Gummer). “I don’t understand foreign languages. I’m from Ontario.” His simile between flying formations and shinny hockey is, needless to say, lost on the Baron.

Their repartee has the amusing texture of a historical vaudeville, with our Canadian unknown hero as the straight man. And between songs (culled from the World War I musical hall repertoire) and joke routines, their stories emerge. As set forth by playwright Brown, it’s a collision (over drinks) of the 19th century and the 20th, the Old World and the New: Von Richthofen with his ironic noblesse oblige, his horseback riding and hunting parties; Brown, the “colonial” with his boyhood dream of flying.

The Canadian, traumatized by the horrors of war, is most proud of his singular achievement of never losing a man in his squadron in combat. That’s not how the German’s mind works.

The Red Baron’s final fatal mission is conjured here, and our man, haunted by the death, tells us that he “did not feel like a victor.” It is, indeed, a long way to Tipperary. Entertaining and instructive.