Rex has done it! A record-busting Fringe came to an end Sunday night 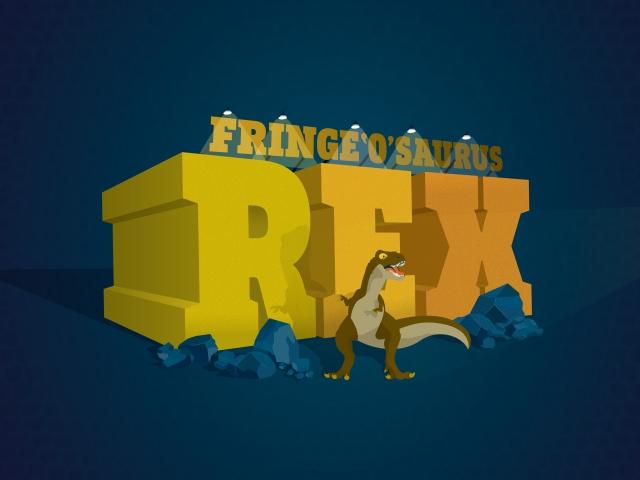 Fringe‘O’Saurus Rex hasn’t exactly tiptoed through town. Larger-than-life Rex has trampled the records. By Sunday evening’s finale, the 37th annual edition of Edmonton’s giant summer theatre bash crashed through last year’s record-breaker by selling 134,276 tickets to its 227 shows, up from 2017’s tally of 129,800. Box office revenue was up 10 per cent, to $1.46 million. And 419 performances had sold out.

It’s not like the weather, veering wildly between hot and smoky and hypothermic plummets into single-digit temperatures, did the Fringe any fat favours, to say the least. But the carnival crowds were up again, 817,000 from last year’s 810,000 at this, the first and largest Fringe on the continent.

As the Greek temptress says, clutching her smartphone in the rom-com Sirens (held over at the Varscona this week), “my stats are very high.”

The“Randomizer,” a bright idea from last year, came into its own this year. It’s the online button on the Fringe website that chooses a show for you if you’re overwhelmed by “the sheer size of what we have going on here” in the multi-show universe. Usage spiralled way up. And Utas reads that as a sign that audiences “are increasingly willing to take a chance,” he says.

I live my life on the fringe,” grins Utas, a Fringe artist himself. “It’s where I spend my days, and it’s who I am at the core….” He argues that “word-of-mouth is still the most crucial element” in finding an audience at the Fringe for the new, the off-centre, the risky. “Against all the noise of people just off hot tours, or (safer, more predictable) stuff, word-of-mouth is the great leveller….”

He points to two exciting originals: Todd Houseman and Lady Vanessa Cardona’s hit Whiteface, with its thorny and non-consoling provocations, and to Macbeth Muet, the violent, high-speed, wordless version of the Scottish play that sold out its entire Fringe run.

Farren Timoteo adapted and directed The Soldier’s Tale — a fascinating, multi-disciplinary World War I collaboration between Stravinsky and Ramuz that had never before been fully staged in  Alberta. It was an experiment. He wondered “would we connect with an audience?”

“I was reminded,” says Timoteo, “that pieces that may appear to have a unique identity or eccentric personality could really thrive at the fringe, where there’s something for everybody  and everybody’s a bit more open to something different. I believe our adventurous and unconventional piece of theatre found the perfect home at the festival; it’s the kind of work I especially feel encouraged to share there.”

And in the end The Soldier’s Tale — with its three actors, dancer, and seven-member ensemble conducted by the ESO’s chief conductor Alexander Prior — pretty much sold out all its performances.

At 12thnight.ca I’ve had to be selective, more selective than I’d like, in seeing Fringe shows and writing about them. I’m here to report, happily, that adventurous artists — the experienced veteran, the up-and-comer, the newcomer — still write plays and take them to meet their first audiences, at the Fringe.

There are multiple examples. Young actor/playwright Makram Ayache is a find: Harun has its flaws, but it’s a big, ambitious, theatrically exciting first play, with a huge emotional investment. It, and its creator, promise much. Actor/playwright Chris Bullough, one of our gutsiest artists, ventured feelingly into something controversial, provocative, probing, and risky in every way with Rig Pig Fantasia.

The new still comes in every shape and size at the Fringe. Teatro La Quindicina muse Stewart Lemoine has premiered not one but two new comedies at this year’s Fringe (A Lesson in Brio, running this week at the Varscona, and The Many Loves of Irene Sloane). Kenneth Brown turned his military history expertise and theatrical know-how to imagining a limbo cabaret (Roy Versus The Red Baron). From their research into the mysterious labyrinths of our own history Linda Wood Edwards and David Cheoros, Fringe veterans both, imagined a theatrical confrontation: The Great Whorehouse Fire of 1921.

Rebecca Merkley, an artist of apparently limitless range who made her Fringe debut in summers past with a comedy and a musical, returned with a hard-hitting serious drama about a queasy cult, Bountiful, and a free-wheeling performance art-y spoof Merk du Soleil (Alas, I didn’t see either; guest 12thnight reviewer Alan Kellogg did). At the other end of theatrical spectrum, playwright Michele Vance Hehir, who paints with a miniaturist’s strokes, premiered the third of her small-town prairie Roseglen trilogy, One Polaroid.

Clown/physicist Christine Lesiak (For Science!, held over this week at Fringe headquarters), and Leif Ingebrigtsen, Sierra Noble and Megan Dart (a kids’ folk musical Fossegrim & Nøk), tested new limits for themselves at the Fringe. So did activist/writer Leslea Kroll (Wellspring) and journalist Liane Faulder (Walk).

The list goes on. The Fringe still inspires, and rewards, bravery and an adventurous spirit. And that’s what keeps us coming back for more.