No one’s staying home this weekend: why would you? A wealth of choices on E-town stages 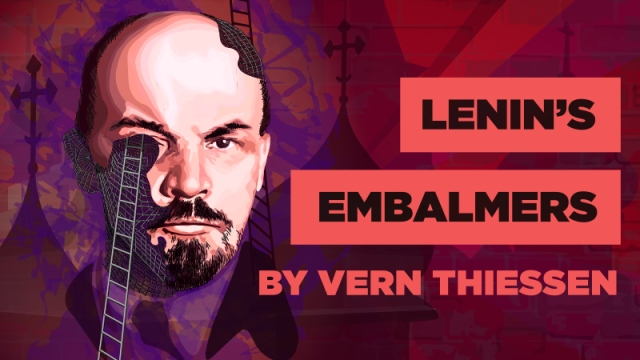 At the U of A’s Studio Theatre, it’s back in the USSR with Lenin’s Embalmers, Vern Thiessen’s black and absurdist 2008 tragicomedy (imagined from a true story) about two competing Jewish biochemists landing the unenviable joint task of preserving for all time the corpse of Lenin. Hey, no pressure, Boris and Vlad: it’s only Stalin giving the order. Talk about redefining gallows humour.

Alexander Donovan, an MFA candidate, directs. His cast is led by Doug Mertz, a highly accomplished actor/ director/ voice coach, as Stalin. And the award-winning playwright himself, Workshop West artistic director Vern Thiessen, puts in a rare stage appearance as Lenin. It opened Thursday and runs at the Timm’s Centre (112th St. and 87 Ave.) through Oct. 20. Tickets: ualberta.ca/artshows.

Tonight, Northern Light Theatre launches the new season with Origin of the Species, a unique two-hand comedy (with trimmings) by the English playwright Bryony Lavery that pairs an archaeologist (Holly Turner) with a four million-year-old woman come to life in the contemporary world (Kristin Johnston). It runs through Oct. 27 at the Studio Theatre in the ATB Financial Arts Barns. 12thnightca talked to NLT artistic director Trevor Schmidt about his upcoming season, and the implications of this off-centre season-opener; read it here. And stay tuned for my 12thnight.ca review. Tickets: 780-471-1586, northernlighttheatre.com.

At Theatre Network, another unusual pair takes the stage, to launch the Roxy Performance Series. Jezebel, At The Still Point stars the French bulldog of the title and her human companion (actor/playwright/dancer/choreographer Ainsley Hillyard of Good Women Dance Collective) in an exploration of time travel and mortality (especially the canine kind). 12thnight met up with the cast last week; read about it here. The show opened Thursday and runs through Oct 21. Tickets: 780-453-2440, theatrenetwork.ca. My 12thnight review is coming up.

At Walterdale, a community theatre that knows no fear of challenge, Barbara Mah directs a cast of 20 in The Triangle Factory Fire Project. The American writer Christopher Piehler revisits, dramatically, the Triangle Shirtwaist Factory tragedy that cost 146 young immigrant women their lives in Manhattan in 1911. A tale of corporate greed and the kind of inhumane treatment of workers that hasn’t exactly vanished from modern practice. It opened Wednesday and runs at Walterdale’s vintage Strathcona ex-firehall playhouse through Oct. 20. Tickets: TIX on the Square (780-420-1757, tixonthesquare.ca).

It’s your last chance to catch Once, an oddball charmer of a musical about the life-changing potential of making music. It’s at the Citadel through Sunday. You can meet the director Ann Hodges at 12thnight ca, and read my review here. Tickets: 780-425-1820, citadeltheatre.com.

You have till Saturday night to be delighted by the madcap escalations of an original screwball comedy. Teatro La Quindicina’s production of Stewart Lemoine’s Skirts On Fire is cavorting pellmell across and behind the Varscona stage (10329 83 Ave.). Read here about what makes screwballs screwy, courtesy of the playwright and Teatro leading man Andrew MacDonald-Smith. And take a peek at my review here. Tickets: teatroq.com