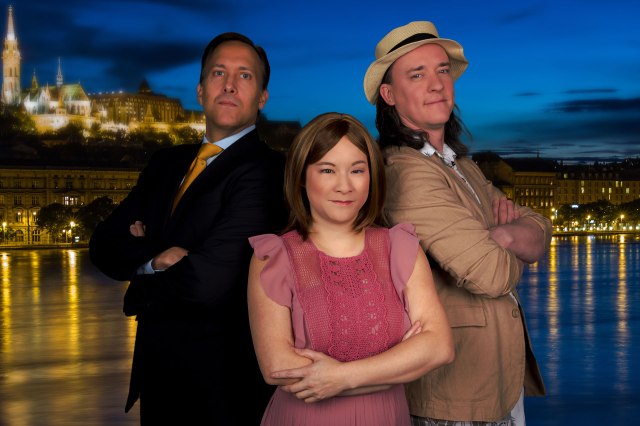 A con game (with song and dance) is one of your options for a night out at live theatre this weekend. Dirty Rotten Scoundrels, a larky musical by the team of David Yazbek (The Band’s Visit, The Full Monty) and Jeffrey Lane, opens Foote in the Door Productions’ fifth season Friday as a purveyor full-bodied Broadway musicals.

Spun from the 1988 Michael Caine/ Steve Martin movie, it stars a competing pair of scam artists on the Riviera (always a propitious setting for lighting) who have their beady eyes on an American soap heiress. Lawrence is palming himself off as a cash-strapped aristocrat-in-exile. Freddy is a small-time swindler, whose technique, pathos-based, involves soliciting funds to buy his ailing grandmother a leg.

Long-time performer Caroline Waye is back directing, after a 10-year hiatus. Her cast, 16 strong, is led by Foote in the Door co-founders Russ Farmer and Ruth Wong-Miller, and Trevor J. Worden. It’s the latter, as Freddy, who gets to sing Great Big Stuff, an ode to crass materialism and upward mobility — the pioneer spirit of conning.

Says Wong-Miller, “I love a show where it seems like men will outsmart women.” Emphasis on seems.

The archive of the Foote in the Door performance collective goes back to a 2013 launch by performers who’d met as students at the Citadel’s Foote School, and a debut production of She Loves Me. This fifth season includes a spring production of Stephen Sondheim’s A Little Night Music.

•Onstage in Edmonton this weekend are two productions timed to commemorate the impending 100th anniversary of the end of the First World War on Nov. 11. 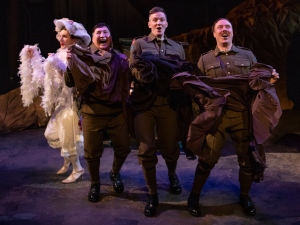 At the Varscona, it’s Shadow Theatre’s premiere of a new play by Neil Grahn. The Comedy Company, inspired by the real-life First World War story of members of Princess Patricia’s Canadian Light Infantry Division ordered by their commander to create original musical comedies to boost troop morale. A cast of top Edmonton actors runs with it through Nov. 11. 12thnight.ca got the chance to talk to the playwright; meet him here. And here’s the 12thnight.ca REVIEW. Tickets: 780-434-5564, shadowtheatre.org.

At the Citadel, opening this very night, is Redpatch, the work of Hardline Productions, their first professional foray outside their Vancouver home town. Co-created by Raes Calvert and Sean Harris Oliver, it’s inspired by the little-known history of the 4,000 plus Indigenous Canadians who signed up to fight in the First World War. It follows the fortunes of a young mixed blood First Nations man (Calvert) who leaves his West Coast home to be a Canadian soldier in that terrible conflict. Meet Hardline’s Calvert and Oliver, a most engaging pair of young theatre artists here. The production runs through Nov. 11. Tickets: 780-425-1820, citadeltheatre.com.

•And, this being E-Town, there’s improv galore: at Rapid Fire Theatre and Grindstone Theatre & Bistro.