The quest to be a warrior: an Indigenous story gets a powerful telling in Redpatch. A review. 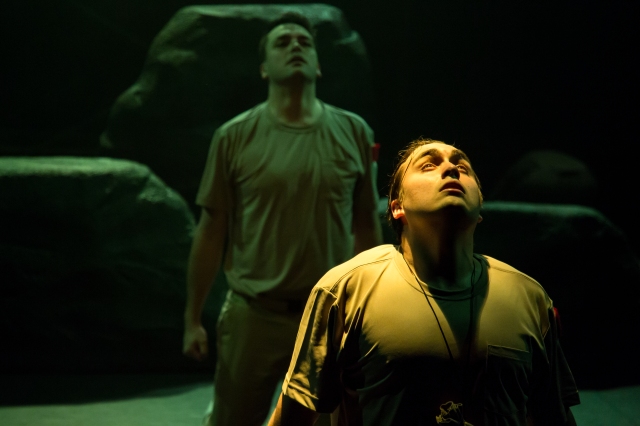 In the striking opening moments of Redpatch a masked prophet in a pyramid of light asks “what is life?” and then vanishes into mist.

It’s a question with legs (and vast reservoirs of imaginative and aerobic drive) in the production by Vancouver’s Hardline theatre that’s arrived on the Citadel’s Maclab stage to tell a Canadian story that Canadians don’t know. Suddenly the stage is infiltrated by strange nightmare creatures in perpetual motion. They’re wearing gas masks. And you realize that the thudding drum score is the doom-laden sound of cannon and artillery fire, woven with barely audible human cries.

If Redpatch, created by Hardline’s Raes Calvert and Sean Harris Oliver, were simply an anti-war play — and really, how could any play about the First World War not be? — it would join a considerable repertoire of horror stories and poetic elegies. But Redpatch sets itself apart, with a particular story to tell. It’s a story drawn from history, in a country where history is hardly a matter of public currency.

More than 4,000 Indigenous Canadians signed up to fight in “the world to end all wars,”  for a country that in word and deed didn’t value them very much. And the artful production directed by Oliver sets about shedding light, both the narrative and theatrical kind, on the mystery of this sacrificial contribution. In the end, Redpatch’s theatrical storytelling, richly imagined in light, sound, explosively choreographed physicality, seems more successful than its storytelling in narrative text. But that’s not to devalue the significance and impact of addressing a little-known story in the live theatre.

At the centre is Half-Blood (Calvert), a young mixed blood First Nations soldier of the Nuu-chah-nulth nation on the west coast of Vancouver Island, who leaves his home on the shores of one ocean to cross another. It’s an aspirational kind of identity crisis that propels him into the bloody, trench-scarred battlefields of western Europe, torn between native tradition and a sense that “the world is changing.”

Like his boyhood friend Jonathon (Joel D. Montgrand), a pal from residential school (a salient fact, fleetingly referenced), he dreams of being a warrior. And on location in the  Half-Blood proves himself formidable in war like his Indigenous compatriots: his wilderness survival skills make him a star in scouting, sniping, trench-raiding, German-killing. As he says, when the going gets tough it’s ‘hey fellas, let’s throw in the Indian first’.”

As Half-Blood’s soul-destroying tally of kills mounts, his visions of home, infiltrated by thoughts of natural beauty, are ever-more powerful and troubling. In Oliver’s production and the performance from Calvert, a charismatic, physically eloquent actor, the past and the present cohabit in ways that are always inventive, visceral, emotionally accessible. Half-Blood is a haunted man. And the Raven (the protean Odessa Shuquaya in one of her three roles), a link from home like his grandmother’s medicine bag, signals as much. 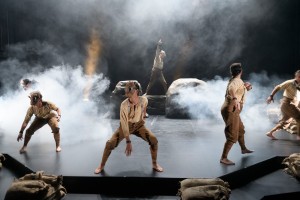 The cast of six accomplished Indigenous actors populate the stage, and the story.  Fellow Canuck recruit Dickie (Chelsea Rose) is a raucous prairie dim-bulb with an ugly racist streak. Bam-Bam (Jennifer Daigle) is a Quebecer who is subject to some taunting, too, because of his other-ness in the Canadian group portrait. Medical student Howard (Taran Kootenhayoo) is a civilizing and conciliatory influence. And the Scottish sergeant (Shuquaya), who barks orders like sergeants do world-wide, “doesn’t like Indians, Frenchies, smart people, and pebbly-faced boys from Saskatchewan” about equally.

The fractiousness of real-time encounters, designed to reveal something about the Canadian mosaic (and they do), seem rather over-extended and repetitive in comparison to the theatrical landscape in which the play flourishes otherwise. The story soars when it’s stylized and imagistic — or unfolds in memorable, economical, wispy memory scenes like the two boys on the lam from school, paddling their canoe out into the ocean to hunt a killer whale. It’s more earthbound in its scenes where the plot unfolds in dialogue.

James Coomber’s rumbling sound design evokes a landscape of dread, ready at every moment to explode into cosmic chaos. And Brad Trenaman’s extraordinary lighting, in dramatic shafts and pools and exploding shimmers, makes it possible to take six actors to Vimy Ridge on a bare stage.

Is war a dream quest where a man discovers himself? Half-Blood’s grandmother She Rides Between (Shuquaya) doesn’t think so. “War drowns men,” she says as he leaves  to “prove himself.” Redpatch unfolds itself in the tension between Jonathon’s “hold my hand and don’t let go” and Grandmother’s “let go of the rope.”

It turns out that the one thing you can’t let go is home.