How to meet people you never meet: thoughts on Viscosity 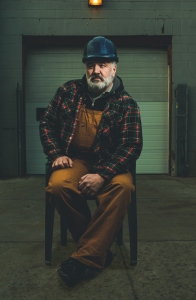 Life is full of surprises. Last night I found myself sitting at a bar stool next to a woman I’d just never run into in my usual life of 7:30 curtain times.

She’s a heavy-equipment operator in the Oil Patch. Feisty, cheerful, evidently not the kind to sidle up to bullshit obliquely, she looked me right in the eye, brewski in hand. And she shrugged as she told her story of working in a man’s world, a world of harsh sexist confrontations and the need to choose between submissiveness and defiance. She told of changing her demeanour and even her body shape (with steroids and visits to 24-hour gyms) in order to show she could do the work of any man, survive, prevail.

Played by Melissa Thingelstad with fierce good humour, she was one of the series of close encounters with real-life stories that make up Viscosity. I met a guy in overalls (Murray Farnell) working on (and under) his pick-up truck, telling his own story of being a regular guy with regular dreams working in the Patch — and his own first-hand realization that not every oil guy was a young dope who makes a shitload of money and blows it all on partying and Ford 150s.

I sat outside a trailer strung with fairy lights as a woman (Sandy Paddick) with a much different Oil Patch story revealed her lonely life far from her daughter: seven years of 10 12-hour days on, four off, in an environment where 80 per cent of the guys are fine and the other 20 per cent, well, aren’t.

Heather Inglis’s Theatre Yes initiative, which has gathered and edited verbatim interviews into monologues, is a drop-in affair that transforms the Backstage Theatre into a bunch of venues — and gives your easy assumptions about big oil a jostle with personal perspectives from people who actually work in that world.

That’s how I ended up at a coffee shop table with an electrician (Chris Bullough) who talked about the dangers of working in oil (the safety standards book was, he said, “written in blood”), and about transitioning the skills of oil workers to alternative energy industries.

If you assume that oil workers aren’t conflicted about environmental science, or they’re just venal and/or blithely ignorant, you’d be off the mark, judging by Viscosity. I got into a car with an actor (Byron Martin) who didn’t make enough money to start a family, buy groceries, pay rent, until he landed an Oil Patch job. He thinks he “won the lottery.” But he points out that it’s not as if we aren’t all complicit in destroying the environment. You drive a car? You fly anywhere? You wear shoes?

I met a Philippine foreign worker (Jimmy Buena) with a sad story to tell about being cheated, both on his home turf and here. I met an Argentine immigrant (Leo Campos Aldunez), who left violence and oppression in his home country for the relative safety here. 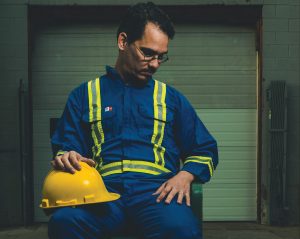 The actors, who occupy a series of evocative “locations” in Brian Bast’s evocative design, are so forcefully engaging that it’s a kind of invitation: you feel the urge to respond directly, even though Viscosity is not that kind of show. Inglis calls it a “performance installation,” and as I did you can arrive when you like, come and go, “activate” a monologue by standing or sitting on an X, and … listen.

It’s meaningful that the stories, with their homely, telling details, are from real life and feel like it. What did I take away? The proposition that the great debate of our time probably shouldn’t be a debate anyhow. How are humans to live in the world without destroying it? If the word “conversation” hadn’t been abused into fraudulence by the corporate and political realms, that would be a place to start.