Raising a little hell: Canada 151 at the Mayfield. A review. 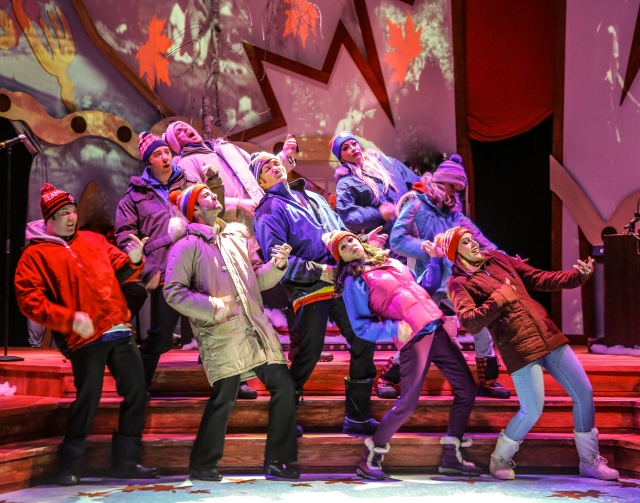 You know you’re in Canada when the Beachcombers theme is in the air pre-show. And the band arrives onstage in lumberjack shirts. And your heart melts just a little when everyone in the opening production number is decked out in parkas, toques, and snow boots.

The amusingly non-assertive title of the latest from the Mayfield is a wry salute to Canada’s signature contribution to international discourse, the apology. Canada 151 turns out to be a hugely entertaining, celebratory, and spirited revue of this country’s music and musicians, and also its defining cultural motifs, riffs, personality quirks.

The subject in Canada 151 is Canadian-ness, a quality that some days seems to have spread its tiny wings and flown away. And the musical range is, to say the least, wide — Don Messer to Leonard Cohen, Our Pet Juliette to Morissette, Stan Rogers to Céline, Bieber to Burton  to Buffy, Great Big Sea to shining sea. As wide as the country splayed out imaginatively as a giant translucent backdrop map (with the TransCanada Highway in big dots) on which the projections of video designer T. Erin Gruber play — Canadian landscapes, people, concerts, northern lights, trips down historical main streets.

The country’s song-scape — a veritable tower of song — is delivered by a startlingly versatile and accomplished nine(!)-member cast of singer/dancers and a crack five-piece band led by musical director/arranger Van Wilmott. It is just not reasonable to expect such deluxe application. And yet, as usual in the Mayfield’s musical extravaganzas, there is nothing skimpy about Canada 151, in either conception or delivery.

As written and compiled by Will Marks and Gerrad Everard (the former a mystery man, the latter a performer in the cast) and directed by Kate Ryan, Canada 151 wraps its theatrical wits around “Canada” and gives it an affectionate squeeze.

It starts with, and regularly returns to, hockey, not so much a sport as a mythology, or maybe a genetic code. This is a country where a hockey announcer — or some big-mouth lunatic in a loud sports jacket who talks about hockey a kilometre a minute — can be a national star. Hockey Night In Canada, Coaches’ Corner, spontaneous eruptions of pick-up hockey in the street (players yell “Car!” and move the net when one comes by, then berate the driver for not picking another road).

The show touches down on all of the above and more. Nice, polite, apologetic, and goofy aren’t in themselves qualities to conjure with, in showbiz. Canada 151 approaches smartly: fast and funny are crucial in collages. And here, it’s mixed with touching.

Hinterland Who’s Who is an amusing gallery of Canadian species including the Canadian Cougar, a hockey mom with a ferocious appetite for Timmy Ho coffee, and blood. “Do not confront or make eye contact.” Did you know that Christopher Robin’s friend Winnie The Pooh has Canadian affiliations? I did not. Someone with free time can explain to me Pooh’s thing with the moose.

Bob and Doug McKenzie, the SCTV hosers, have long ago ceased to raise a laugh even in memory. They’re actually funny as conjured by Keiran Martin Murphy and Kevin Dabbs to pick the top 10 Canadians of all time. Anyone remember Body Break? Anyone wonder why curling is considered a viable spectator experience? 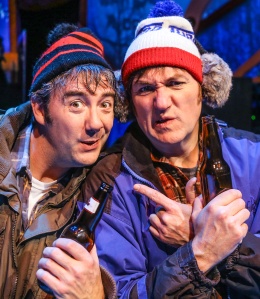 The songs, which keep coming for more than two and a half hours, are introduced in unexpected ways from their Canuck point of origin on the map. The Trailer Park Boys, for example, do the honours for Barrett’s Privateers by Stan Rogers. The introduction to the Guess Who’s American Woman is cut short when the introducers just blow away at the corner of Portage and Main in the ‘Peg.

To return to the music, the raison d’être of the show, there is an crazy profusion of it. And while they’re not about impersonation per se, the performers and the band are remarkably dexterous at capturing the recognizable essence of a huge variety of styles and sounds. In this they are materially assisted by Christine Bandelow’s choreography and the hundreds of costumes designed by Leona Brausen — both liberally laced with signature motifs and amusing references. 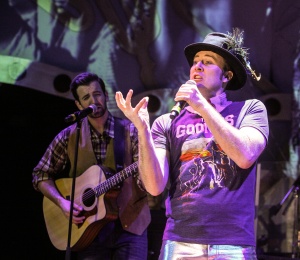 O what a feeling … gonna fill your head with music and satisfy your soul. Well, there’s something pretty mesmerizing about having Canadian music collected on one stage for one evening’s entertainment. Only because Canada 151 is so fulsome do the absences of Gordon Lightfoot, Ian Tyson and a big Drake splash even cross your mind. The Rankins, k.d. lang, Gord Downie, Corey Hart, Shania and Sarah, Avril Lavigne, Buffy Sainte-Marie, a funny Bieber scene, a Nickelback stage gag, Rush, a visual deconstruction of the CBC logo …. The list is vast.

We Canadians may not have been born to be wild. But the urge to raise a little hell knows no age or climatic impediments. Time to get out that gift certificate, and your Christmas shopping list. This is a good one.

Written and complied by: Will Marks and Gerrad Everard