“Ripe for a lapse”: Fallen Angels is a Bright Young Things lark. A review. 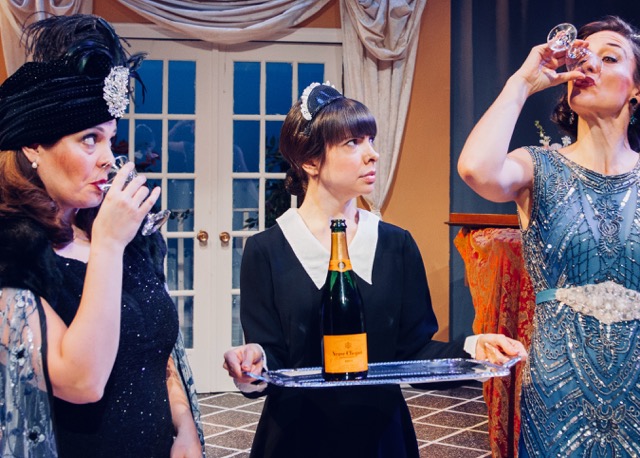 The “nice part” of Julia is perfectly content with matrimonial “happiness and tranquillity.” There lurks, however, “a beastly, unworthy thing waiting to spring.”

And, she adds darkly, “it hasn’t been fed for a long LONG time….”

In Noël Coward’s light and fizzy 1925 comedy Fallen Angels, best friends Julia (Belinda Cornish) and Jane (Vanessa Sabourin), “wretchedly happy married women,” are sent into a tailspin by the imminent arrival of the exotic French lover with whom they each had a “grand passion” seven years before.

After five years of marital worthiness, a certain downside has begun to reveal itself — in boredom. And the women cut to the chase (and to sensational quantities of champagne). “We’re both ripe for a lapse,” declares Julia. “A re-lapse,” amends Jane, as they dissolve into laughter. My own favourite line, in their joint assessment, belongs to the latter: “we shall go down like ninepins.”

Drunkenness! Nostalgia for pre-marital sexual adventuring! From respectable married ladies! Coward’s scandalous hit comedy, which unleashed torrents of outrage in the press and activity at the box office, has been taken up with gusto and style by Bright Young Things. And in Marianne Copthorne’s production, the big offender (and the big draw) — the virtuoso scene in which Julia and Jane get drunk and disorderly — is calibrated in a masterful way by the actors.

Giddy laughter turns hysterical, rather astute analysis of marriage and sexual politics gets de-railed or upended by non-sequiturs or wistful thoughts of lost romantic passion … and two old friends work themselves into a major row. Cornish and Sabourin — the one more languid and fluting and the other a bit more furrowed and intense —  negotiate the wild fluctuations of the unravelling scene with great comic dexterity, chemistry, and detail. “Riotous” is, I guess, exactly the word for a two-woman riot against the Victorian certainties that are melting away in the cultural climate change of the modern age. And the actors are great fun together, as they weave gambits and feints and insights.

In Fallen Angels, effervescent as it is, you get to see the Coward’s sassy intersection and reinvention of of three classic theatrical stage biz riffs. And all are accomplished with considerable pizzaz in this production. One is inebriation and the many shades of tipsy en route to completely corked. One involves telephones — both the calls and the cords thereof (Cornish in a self-strangulation tango with the cord is a sight to cherish). The third is the smart servant, since the time of Roman comedy way more knowing than the master.

The upper class ladies, languishing in idleness and exquisite gowns (lighted by Alana Rice), are no match for Julia’s remarkable maid “Saunders” — as re-christened imperiously by Julia since Jasmine is “rather a sticky name … for the house.” Saunders (Rachel Bowron) is arguably the model for The Modern Woman. She’s been everywhere; she’s done everything. She’s an expert in golf, tropical medicine, hangover cures. She has perfect pitch; she speaks excellent French; she sets herself down at the piano with aplomb to deliver art songs.

Bowron is very funny as this formidably capable person, whose catalogue of accomplishments is an affront to the class system. She steps forward with a pert and condescending smile of bemusement to be helpful. And when rebuffed by her dismissive employers she retreats into a position of professional maid-ly impassivity. Bowron gets laughs every time she crosses the stage.

Act II is so light it’s actually in danger of floating away into the ether. It’s a measure of deluxe Bright Young Things casting here that the minor roles of the golf-playing husbands, who are there to be complacent and patronizing, then outraged, are taken on by substantial actors: John Ullyatt and Nathan Cuckow. The former has a lighter touch and charm; the latter is more of a blusterer and harder to budge. But, clearly, it’s a little late (by, oh, a couple of decades) for their kind of tweedy Victorian pomposity.

It makes Mark Meer’s cameo as the suave, alluring Frenchman, their worst nightmare, even more fun. And it takes your mind off passing thoughts about the vanishing of the plot. But by then, little glimmering points about sexual hypocrisy and equality have already landed, lightly and on their tippy toes, with bubbles in hand.