“The elephant in the room is … an elephant.” Conni Massing’s Matara opens the Workshop West season 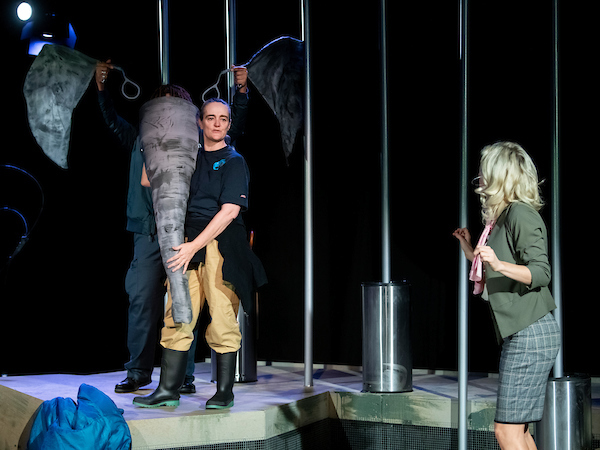 That not one but two new plays by Conni Massing are premiering this season is noteworthy. That they open a  mere two weeks apart, the work of two different theatre companies, is more striking still.

And here’s the capper. One falls within the signature Massing turf, seeded with romantic comedies as wry and funny as the playwright herself. The other is a radical departure for Massing into a “very different tone” and a controversy that has galvanized heated, polarized feelings which she admits candidly she hasn’t entirely resolved for herself.

“It’s complicated,” says Massing of Matara, the first and only play of the season in which an elephant takes the stage. “My feelings about zoos have evolved but I still don’t know what I think….”

You’ll have to wait till a fortnight for Oh Christmas Tree!, a festive “Christmas Valentine,” (to mix our seasonal references). It opens Dec. 13 in Theatre Network’s Roxy Performance Series in an indie production directed by Massing’s old friend Brian Deedrick, retrieved from the world of opera for this special occasion. More in a future post about a Yuletide “relationship comedy” in which the old conundrum “to tree or not to tree” figures prominently.

Matara, which launches Workshop West’s 40th anniversary season Friday at the Backstage Theatre, “inevitably wades into controversy” (as Massing puts it) with the fictional story of an elephant in a small zoo. Ring a bell? Yes, it’s inspired by our Lucy, the only solitary elephant in the country, and in a frozen winter city to boot. OK, Christmas may have its stresses (and the ancient argument over real vs artificial trees). But as Massing says, laughing, “public controversies don’t normally break out over romantic comedies. I’m not expecting any protests outside the door of Oh Christmas Tree!.”

In Matara, as Massing has said, “the elephant in the room is … an elephant.” And on a break between rehearsals for both her new plays last week, she made time to explain why it had theatrical potential. “I’ve always felt strongly about animals,” she says. “But that on its own does not a dramatic premise make. And then I heard about Lucy….” Since Massing “doesn’t go to zoos” — “I thought they were flat-out creepy.” — it took a Free Lucy! button in a grocery story to pique Massing’s curiosity.

“I wanted to investigate this special relationship we have with animals. It’s complicated; it runs the gamut from household pets to wild animals.” And the story of Lucy, with all the attendant tumult of controversy, was “an interesting context to think more about the very peculiar, artificial environment where we plunk animals from half-way across the globe … so we can look at them.”

Massing was already working on a play about the relationship between an elephant and an elephant-keeper, inspired by Lucy, when Workshop West’s Vern Thiessen launched his 2016  initiative in playwright/community match-making. “Where would you like to spend a month?” he asked a diverse octet of Edmonton playwrights, with a view to generating diverse 10-minute playlets that could add up to a cultural mosaic of this place. Massing’s answer: “at the Valley Zoo,” where she’d never before gained backstage access.

The staff, naturally, were a little gun-shy. After all, they’d weathered the reverb of the Lucy controversies, including death threats: Should Edmonton keep Lucy? Should Edmonton send Lucy to join fellow elephants somewhere a lot more socially and climatically hospitable?. “People feel SO strongly about her. There’s so much anger, so much sense of being right…. It’s complicated and that’s great for me as a playwright.”

Massing donned steel-toed rubber boots and grabbed a shovel. She observed and shadowed the zookeepers through their shifts, and says she felt “a bit funny” about not offering up the information she was already writing a play about Lucy. “But I was so grateful to be able to hang out and learn….”

Some knowledge was practical. “This is how the keepers arrange themselves around the elephant when she’s on a walk. This is how you bathe an elephant. Elephants’ feet get sore: this is what you do….”

Some knowledge was insight into the “emotional connection” between the zookeepers and the elephant. “They’re not really supposed to anthropomorphize the animals; they’re supposed to be arm’s length. But they’re not! They LOVE the elephant. And the elephant seems to care for them too…. She’s been there since she was three or four years old. And now she’s 42. So I’m really torn about what she considers to be her home. And she’s really bonded with her keepers.”

Massing sighs. She went into the research thinking “it’s just not right for Lucy to be here. Let’s send her away. The End…. The activists think that she hasn’t been examined by the right calibre of vet to make a judgment.” But in the end, “now, at this point in time, I really don’t think moving Lucy is the best thing to do.” Even if you concede that argument, there’s the self-fulfilling prophecy to consider: why was Lucy here in the first place? And then, knowing how unnatural solitude is for elephants, why on earth did the city wait so long that it eventually became problematic to move her?

“I get why people are appalled that we have this lone elephant. In Edmonton. In winter for gawd’s sake…. So far from home (Lucy is from Sri Lanka). And the climate! In the natural order of things Lucy would be wandering through teak forests holding the tail of the elephant in front, with 40 others behind. They’re meant to live in herds, in families.”

“Times have changed. (The zoo) would never get another elephant. When Lucy dies, that’s the end of the chapter.”

“It’s been an interesting journey,” says Massing of her work on Matara. “I’ve gone from absolute black-and-white (certainty) to thinking this is actually quite complicated….”

The three characters in Matara are there, says the playwright, “to represent three points of view, on animals and on zoos generally. It helps me include my own complicated feelings.” One is Lucy’s keeper (Elinor Holt); one is a foreign PhD student from Rwanda (Minister Faust) working as a security guard. And the third is a marketing/ outreach/ image consultant (Patricia Zentilli). “I’m familiar with that kind of person from the arts,” says Massing, “someone who gets parachuted in to an organization having trouble, in order to help them come up with ‘a new narrative’.”

And there’s a fourth role, too, and not easy to cast: Matara herself, as created by the joint forces of puppet designer Randall Fraser and projection scenographer T. Erin Gruber, and sound designers Darrin Hagen and Nick Samoil.

“I’ve learned many admirable things about zoos,” Massing says. “They do great work in conservation and all that. No argument there. But, bottom line, to walk around any zoo, it’s hard for me to see giant wild animals — OK, not snakes or fruit flies — in cages. It hurts my head, my heart maybe….”

There’s something downright magical about elephants, as Massing muses. “They’re brilliant; they’ve had a place of honour in many cultures and mythologies…. People really care about them, find them so appealing.” So what is it about these huge exotic creatures that is irresistible, that makes you care about their fortunes in the world?

Intelligence, for one, thinks Massing. And size: “people have the feeling of being in the presence of something grand.” And eyes. “We stare into their faces and see … ourselves. It’s much harder to make the public feel sympathy for animals who don’t have big eyes.”