Is history spinning forwards or backwards? Shows at Studio and MacEwan wonder about that 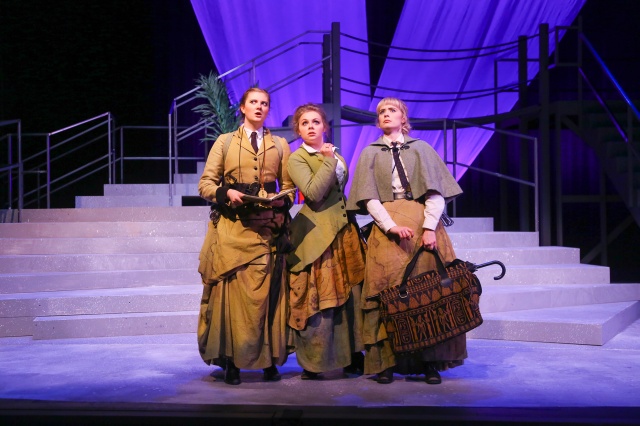 On the Verge, U of A Studio Theatre. Photo by Ed Ellis.

It is a disconcertingly à propos moment in the space-time continuum for both the plays opening this week at Edmonton’s biggest theatre schools. You can easily make yourself dizzy wondering whether history is catapulting forward or spinning backwards. Both shows play with your vertigo.

At the U of A’s Studio Theatre, opening tonight on the Timms Centre For The Arts stage, it’s On The Verge or the Geography of Yearning, Eric Overmyer’s nutty, fantastical chronicle of the adventures of three intrepid Victorian lady explorers on their way to Terra Incognito in the Antipodes in 1888. “High adventure and stupefying risk are my metier!” cries one, after they’ve negotiated another “awful, yawning chasm,” not to mention jungles, crocodiles, glaciers, cannibals, a troll….

En route to the last of the brave new worlds, as odd phrases pop into their heads, they come to realize they’re travelling not just through space but through time — until they arrive in the strangest location of all, 1950s America.

In MacEwan University’s Triffo Theatre, where it opened Wednesday, it’s 9 to 5, the 2009 Broadway musical fashioned from the movie of two decades before that, and spun from Dolly Parton’s irresistibly catchy title song (doesn’t just reading the title make the tune emerge from the depths of your brain to centrestage?). The book is by Patricia Resnick, the score is by the irrepressible Dolly.

It reverses through time to the age of slime in which the workplace was was dominated by creepy, lying, patronizing, hypocritical chauvinists — otherwise known as The Boss. “Be a good girl, go get my coffee.” Hey, wasn’t that earlier today? And hey, even in this enlightened age, aren’t there some countries in the world with bosses like that? What on earth happened to the notion of progress? Just asking.

On The Verge, directed by the former U of A drama department chair Kathleen Weiss, runs through Dec. 8 at the University of Alberta’s Timms Centre for the Arts. Tickets: 780-492-2495 or ualberta.ca/artshows. 9 to 5, directed by theatre arts head Jim Guedo (and launching the MacEwan University season), is at the Triffo Theatre in Allard Hall through Dec. 8. Tickets: Tickets@MacEwan.ca.