Dreaming of home: Matara takes us to the zoo and a lone elephant, at Workshop West. A review. 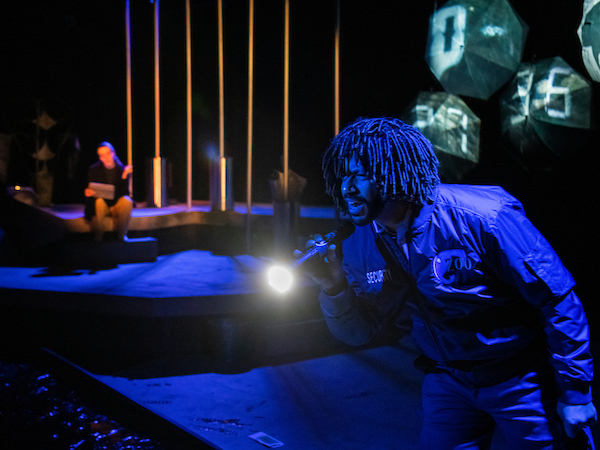 “This is her home. And we are her family.”

That’s Karen the zookeeper (Elinor Holt) taking on protesters and talking about her charge, who’s big, exotic, fascinating — and languishing a world away from her ‘country of origin’. Matara is an elephant — no, the elephant — in a small, struggling zoo in a dark, wintry city with a river running through it.

And if you don’t recognize in that dramatic scenario the high-profile controversy about Lucy, the sole elephant aging into decrepitude in Edmonton’s Valley Zoo, well, you’ve been in ra-ra chamber of commerce meetings too long with the door closed.

The thorny idea of “home,” what it means, what it can legitimately claim to possess, what it plants in the heart, is everywhere in Conni Massing’s provocative, thoughtful, absorbing — and genuinely strange — new play Matara, directed by Tracy Carroll to launch Workshop West’s 40th anniversary season. Matara, the title character, is recently bereaved: her friend Cheerio, the zoo’s other elephant, has recently died. And since elephants are sociable animals who need the company — and in frozen exile, you’d think the consolation — of other elephants in order to thrive, the incipient tragedy attached to Matara’s elephantine solitude is the urgency that drives the play.

Not that Matara’s human foster family, so to speak, in the “home” she’s had for decades, is inattentive or negligent. Au contraire. Karen is devoted, passionately, fiercely, unequivocally, to the elephant, to the exclusion of human relationships. Matara is her only friend. She converses with Matara; she advocates for Matara; she interprets Matara’s every footstep, every gesture of ear and trunk. “Are you dancing, my love? Is it a waltz?” She wonders at times if she’s “an alien.” She may have gone mad.

Holt, who stomps the stage in her rubber boots like someone testing the ground for a possible subterranean attack, is compelling in the role.

As Karen explains at the outset, that protective empathy originated in the exposure to exotic animals that zoos deliver to kids. Karen’s defence of zoos will alter in the course of Matara, haven to prison.

The zoo, for its part, is needy too. It needs its star attraction alive and healthy. It needs an audience, and funding, two related goals as every arts company in the country will understand. Enter Romney (Patricia Zentilli).

She’s a perky and beaming “corporative narrative consultant and fund-raising facilitator,” as she explains. Her gig is to put a positive spin on the zoo and “change public perception”  in the light of the elephant controversy and the Wild Watch protesters outside the gates.

Sending Matara to an elephant sanctuary would be a public relations, and revenue, disaster: look what happened to Ringling Brothers Circus when they got rid of the elephants, says Romney. She’s all about “good news stories” and “competing narratives” as she  launches a series of pr initiatives, like a “Perspectives on Nature” series, a solstice ball, a hilarious poetry contest.

In Romney, Massing, who has a wickedly sharp ear for corporate-speak — “under-promise and over-deliver, that’s the rule in my business” — has created a juicy comic role. And Zentilli makes a meal of it, in a very funny performance that nails the glib cadence of spin-doctoring, and should make practitioners in every field wince a little.

The third character, Marcel (Minister Faust), is the zoo night security guard, a PhD student far from home — someone completely outside Romney’s ken. As a survivor of the Rwandan genocide that claimed his family, he’s a solitary exilé, like Matara. He brings a perspective on human tragedy and displacement to a setting dominated by an animal tragedy and displacement. Struggling to adjust to his frigid new surroundings without judgment, he is, as Minister Faust’s performance captures, wary, bemused, and curious.

Romney has never seen wariness that she didn’t want to overcome and “cure,” or a reference to “instinct” she didn’t want to pursue. But it is perhaps a misstep for the play and production to take her dimness into out-and-out farcical territory in one scene with Marcel. We already know how little she understands what people, much less animals, are thinking. But the actors negotiate with aplomb.

Like Karen, Marcel has a relationship with nature. But he doesn’t talk to the elephant; he communes with the river, rising daily in the non-stop rain and sleet and snow. And his sense of an impending watery apocalypse gives Matara its strange, lyrical quality as it joins with the story of Noah and his boat-building venture in animal rescue.

As for Matara herself, the elephant is conjured in an ingeniously deconstructed low-tech creation — trunk, eyes, ears — by the combined forces of puppet designer Randall Fraser and sound designers Darrin Hagen and Nick Samoil. She’s mysterious, unknowable, and moved onstage by human agency.

In Carroll’s production, smartly, the zoo is the idea of captivity in a foreign world, imagined and not put onstage. The inhospitality of that world where wild animals have been relocated and detained is suggested by designer T. Erin Gruber’s creative collection of bars and umbrellas, across which projections play, with non-stop shafts of precipitation. Eerie pewter winter half-light, which we know so well here, is perfectly captured; you’ll want to give every living creature mitts.

The multiple perspectives on zoos and our fascination with animals are admirably touched on in Matara. And the question is floated for our perusal: Can we legitimately ever say we “know” what’s best for an animal? Can we dream their dreams for them?

The issues are there. But there’s a strangeness, too, that gives the play its lustre. Matara is infiltrated by lyrical visions, the sense of loss, dreams, dreams-turned-nightmares. Home, in the end, is what haunts you, says Massing’s play. And at the zoo, we’re seeing strangers in a strange land.