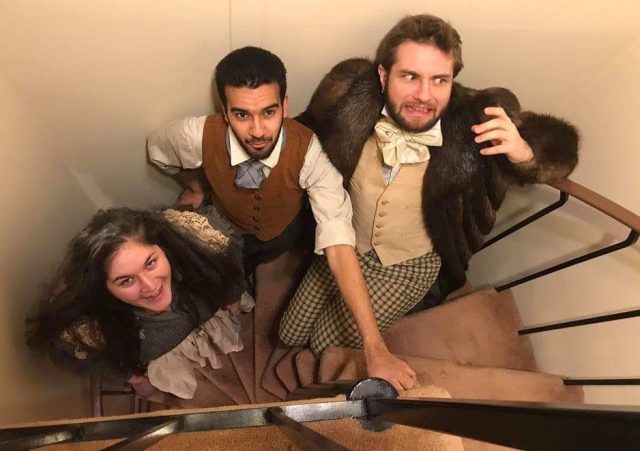 There’s mistletoe, a tree, and an against-the-odds nerd romance in the delightful holiday show currently running at the Citadel.  Miss Bennet: Christmas at Pemberley, has taken the initiative on seasonal entertainments, by transplanting us in the evergreen Regency world of Jane Austen, with a modern “sequel” of sorts to Pride and Prejudice.

And that is just the start. This is the week when the early signs are confirmed and unmistakeable: seasonal entertainments have arrived for your diversion (and for preventing you from decking your relatives instead of the halls).

•Starting tonight, it’s Empress of Blandings’ version of Creatures of Impulse by W.S. Gilbert (yes, of G&S fame). It’s an 1871  farce (originally a musical) set in motion by the unwelcome tenure of a particularly problematic client at The Three Pigeons inn. She might be a bad fairy, which would certainly up the Trip Advisor ante.

A young indie collective with a bent for witty, original contemporary reinventions, Empress of Blandings returns to the scene trailing laughter, sold-out houses — and an archive of Fringe comedies including Molière’s The Flying Doctor; Onions and Garlic, an original musical fashioned from a traditional Jewish folktale; amazingly,a version of Oscar Wilde’s The Importance of Being Earnest.

•Wot!? The one that’s as big as me?! It’s the week when the Citadel’s wonderful production of A Christmas Carol returns to the Maclab stage for its 19th, and final, season.  Adapted by Tom Wood from the indelible Dickens novella of 1843, about a frozen-hearted man reclaimed for humanity by a ghostly intervention on Christmas Eve, Bob Baker’s production has been a venerable civic seasonal tradition for nearly two decades. It opens Thursday, and you have till Dec. 23 to see Julien Arnold, an erstwhile Bob Cratchit, as the flinty Ebenezer Scrooge.

Forget the hockey mantra ‘maybe next year’. The theatre company plans to retire this production, and next Yule season unveil a new Christmas Carol adaptation.