“The season when abundance rejoices”: a splendid Christmas Carol retires at the Citadel after 19 seasons

“Christmas, sir, is a cheat!” snaps Mr. Ebenezer Scrooge with a grimace of distaste that may strike a chord in your own soul — especially if you’ve done time in a mall, barraged by retail jollity and the seasonal oeuvre of Mariah Carey.

For 18 seasons, the Citadel’s bountiful production of A Christmas Carol, adapted by actor/playwright Tom Wood and brought to the stage by director Bob Baker, has been a glorious counter-argument to Bah! Humbug!. And Edmonton has taken it to heart.

Thursday night is an historic event in the civic archive. It’s the 19th, and final, opening night of a production that has become a bona fide Christmas tradition in these parts. And it’s remarkable not only for its longevity but its thrilling theatrical ingenuity, its emotional complexity, its audience bonding. Next year, the Citadel plans to unveil a new adaptation of Dickens’ celebrated 1843 ghost story novella; that Christmas Carol Yet To Come remains shrouded in mystery.

When A Christmas Carol opened in December 2000 on the Citadel’s open, no-secrets Maclab thrust stage — a single urchin in a pool of light sings God Rest Ye Merry Gentlemen and vanishes —  Cheryl Hoover, stage manager at the time, now the Citadel’s Director of Production, was holding her breath. She didn’t exhale till intermission.

It was, is, after all, a huge show by any measure — “one of the most complex I’ve ever worked on, and one of the best,” says Hoover. The costumed cast of 39, nearly half of them kids ages seven to 15, are in perpetual motion. So is Leslie Frankish’s design, built entirely in-house. It looks like a vintage Victorian card. And it opens up like a magic Christmas box and then a snow globe, to reveal the world, indoors and out-, of an ossified misanthrope whose soul is reconstituted on Christmas Eve in a last-ditch intervention from the spirit world. 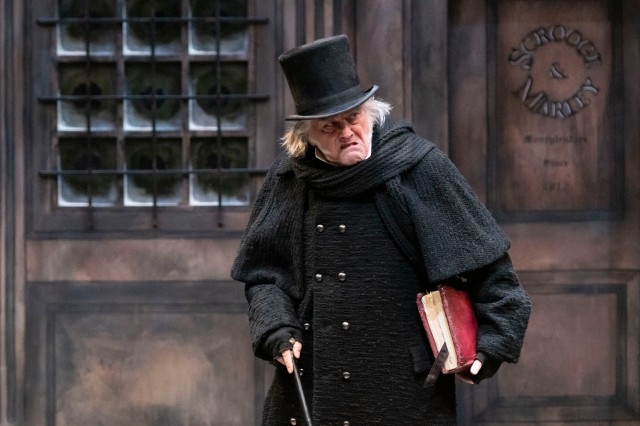 Street lamps and staircases are reconfigured constantly by half-lit “human manpower,” as Hoover says of the “150 scenery moves” in the show. They’re executed — in a  “choreographed dance” as Hoover puts it — as Mr. Scrooge stomps furiously through London’s crowded streets, past arcades of shops, from the chilly offices of Marley & Scrooge to his own bleak vaulted chambers. The journey orchestrated by the three ghosts takes the frozen-hearted Ebenezer back into his own past and the roots of his soulless avarice, and forward through space and time, even into the grave and back, in a swirl of dramatically escalating scenes.

Hoover tots up the person-power. “it took about 100 wardrobe, wig- and facial hair makers, carpenters, prop builders, painters, electricians, audio (specialists), riggers and stage craftspeople to build the show,” including its 1500 costume pieces. And it takes a crew of 20 to run every performance, with its 750 sound and 250 lighting cues.

There’s music: the late Michael Becker’s cinematic soundscape of familiar carols filtering through an unearthly musical ether. There’s magic: Scrooge’s door knocker transforms into face of his late and unlamented parter Jacob Marley; his bell lifts off the table of its own volition. The magic is low-tech but tricky on a thrust stage where there’s no proscenium to hide behind. And there are ghosts who preside over Scrooge’s Christmas Eve reclamation for humanity.

A Christmas Carol is so intricately put together that, in its premiere year, as Hoover reports, “it took us two hours to tech from the end of the opening scene” ( in which we’re watching Marley’s funeral through the fog) to lights-up in the next, a bustling scene of shoppers, vendors and street people — less than a minute in the play. When the show went into its first preview with an audience, “it was our first full run-through.”

“That night was my Christmas miracle,” says Hoover. Michelle Chan, then the assistant stage manager and now the Citadel’s resident S.M., echoes the thought. “It’s a feeling that I will never forget, and I still have that feeling on this show every year. There’s something truly magical and transformative about this production and how the audience reacts to it.”

Pulling it off with four weeks’ rehearsal that first year was a race against time and improbability. Naturally, there have been glitches: improv time in live theatre, and a test of stage managerial nerves.

At one first-year matinee, for example, someone “absent-mindedly plugged in something in the trap room…” says Hoover, “causing a power overload. So (Scrooge’s) bed coming out of the floor came to a halt midway rising out of the floor.” Oops.

At one Year 2 performance, the ghost of Scrooge’s late and unlamented partner Marley couldn’t connect his harness to the rig that flies him magically out the window — as per Wood’s blithe stage direction “Marley lifts into the air and floats out the window.” So the actor, the late Larry Yachimec, had to walk off instead. He cleverly “exited into the closet door,” Hoover says. “Truly magical…. Problem-solving in an instant is one of the thrills of live theatre.”

Hoover remembers the time the cemetery scene ran over its own cable (en route to the stage) and abruptly halted. In the total blackness, one crew member rushed on, and tripped and rolled over another. “Keystone Kops,” says the imperturbable Hoover, watching on her infrared monitor.

To say there’s a show-behind-the-show isn’t just a fanciful truism in a production as complicated as A Christmas Carol. In Year 6, a new sound operator arrived. To give the newcomer a fighting chance with the barrage of cues, Hoover remembers that Michelle Chan and head electrician Sheila Cleasby (who like Chan is a 19-year veteran of A Christmas Carol) “acted out the entire show so I could call all those sound cues for our new guy to practice.”

A long-run on the page makes a classic. A long-run on the stage — especially if it happens but once a year, with veterans, newcomers, and lots of kids (and growth spurts) — makes a classic crisis, potentially. Scrooge can get a year or two or seven older (“and not an hour richer,” as he points out acidly). But, face it, it just looks wrong if the Cratchit kids are college age. In 19 seasons of Christmas Carols, families of actors, and generations of kids, have grown up (many of them into acting careers) declaring ‘Merry Christmas!’ in November. And they’ve graduated to other roles in the show as they grew.

Maralyn Ryan, who played Scrooge’s charwoman Mrs. Dilber for 14 years, has been in A Christmas Carol with both her daughters Kate and Bridget Ryan, and her granddaughter Emma Wilmott. The Dowler-Coltmans, Jordan, Braydon and Tim, have occupied a range of Cratchit roles (this year Braydon is in the show as Joseph). The Cheladyn’s — dad Mitch and his two daughters Lea and Tatiana — were in the show together for years.

In 19 Christmas Carols, a small but distinguished coterie of actors has delivered ‘Bah, Humbug!’ from the Citadel stage. For the first 11 seasons, Wood himself was the flinty Ebenezer, “tight-fisted hand at the grindstone” and poster-boy for spiritual makeovers. It’s a big role (Scrooge is onstage for all but six minutes), and as fashioned by Wood the playwright, an unusually complex one, in an adaptation that’s all about the human capacity for change and redemption. As Hoover says, “if we are overjoyed to see that change in the ‘wake up’ scene, Scrooge has done his job. The message that it’s never too late is so important.”

The late Stratford and Tarragon star Richard McMillan took on the role in 2010 for a couple of seasons. James MacDonald, now the artistic director of Western Canada Theatre in Kamloops, was either Scrooge or Marley for six. John Wright has been a Citadel Scrooge. And as a startling testimonial to versatility, the production’s original Bob Cratchit, Julien Arnold, moved from that assignment as the big-hearted victim of Victorian injustice to the old skinflint himself. You’ll see him as Scrooge again this year (alternating with Glenn Nelson), with Sheldon Elter as Bob.

The Cratchit with the crutch might only be in three scenes and the finale of A Christmas Carol, but he does get the big showstopper line and the signature prop. Downside? he has to stay petit — small enough for Bob Cratchit to lift up onto his shoulder. Danielle Checknita at 11 was the first Tiny Tim, who graduated to “Numerous Boys” the next year, and “girl roles” after that. Emma Houghton, currently on the Citadel mainstage as the flighty Lydia in Miss Bennet: Christmas at Pemberley, has been a Tiny Tim. 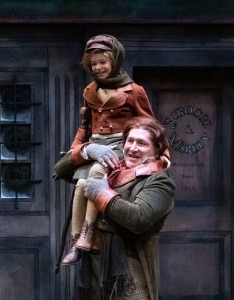 The first boy Tiny Tim was Ben Wheelwright, at 9, in 2002. He was the youngest of the Scrooges two years later, as well as Monkey Boy, assistant to the pawnbroker Old Joe, who ends up with Scrooge’s bed linen. These days Wheelwright is on Broadway, in the two-part Harry Potter and the Cursed Child, and before that The Curious Incident Of The Dog In The Night-Time.

For Michelle Chan, “it’s been so very important…. It was my very first show at the Citadel and I feel so proud to have been involved from the beginning. It has made me a stronger stage manager and I have developed some amazing friendships out of it…. It is always the start of my real Christmas season and it will hold a special place for me always.” As Hoover says, “how wonderful to know you are part of someone’s yearly tradition….”

“Tis the season when abundance rejoices,” says one Victorian worthy in A Christmas Carol. And abundant this production of A Christmas Carol has been. For that big, celebratory emotional experience, year after year, we’re grateful.

Adapted by: Tom Wood from the Charles Dickens novella