The Malachite Macbeth haunts a church: a review 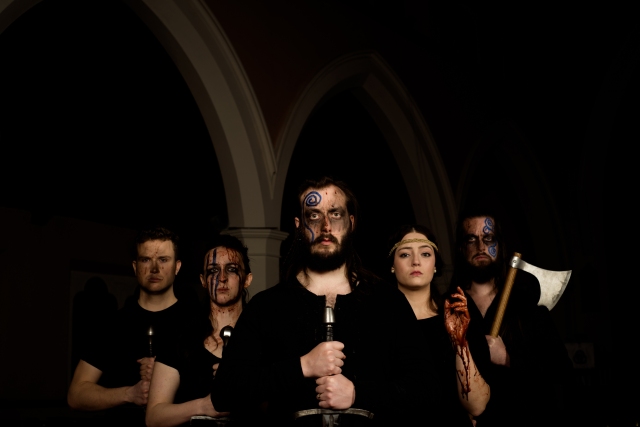 In this the mournful post-festive season, there is something more than a little unnerving about entering a vaulted dimly lit chamber, to the wail of a single violin.

The shadows of a pale, spectral giant tree flicker against the walls like human limbs (set and lighting designer: Sarah Karpyshin). When the fog rolls in, and a murky gaggle stomps towards us along a gangway through time and possibly straight from hell, you’ll swear you’re hearing Gaelic curses and disembodied screams float through the air. For hauntings, you can’t beat a church.

And a vintage wood-lined church is where you’ll meet a man of action, not apparently given to introspection, who discovers in himself “dark and deep desires” — and the capacity for betrayal and murder.

In accounts of Shakespeare’s dark, hurtling tragedy, there are Macbeths that chronicle the spectacular plummet of a larger-than-life hero into the moral abyss, head first. There are Macbeths that set about locating the lethal seed of “vaulting ambition” and watching its metastasizing growth, as watered by suggestion, then panic: was it planted? was it there all along? There are Macbeths that lean heavily towards the political cycles whereby rebellion inevitably becomes tyranny through the grinding gears of human corruptibility. There are Celtic gore-fests.

This production, which occupies every part of the church sanctuary, is none of the above. In Byron Martin’s performance, the question of whether Macbeth has been singled out by the fates, or whether he’s inherently corruptible, gives way to the sense that hell, on a personal and public level, is created incrementally, choice by choice. The Witches’ prophecy is an entry-level drug for the decent man who will find his own imagination toxic, his BFF his mortal enemy, and the world chaotic. “Present fears are less than horrible imaginings” and “function is smother’d in surmise,” as he says after his first encounter with the Wyrd Sisters, alongside his pal Banquo (Colin Matty).

Martin’s Macbeth seems to be a man not given to imaginings or surmising on a good day. He’s more into male solidarity and bonding in battle, witness his easy rapport with Matty’s excellent Banquo. And the Wyrd Sisters, who plant spindles topped by skulls and pull strings around them, are at first a conversational discussion point between him and his friend.

Duncan, the rightful King (Bob Greenwood), is, unusually, a pleasant ditherer who can’t quite focus and whose declarations, fuelled by whimsy, tend to wander vaguely off course. Greenwood’s Porter, with his delivery of Shakespeare’s only knock-knock joke, is a low-life version of the King. The Witches — Monica Maddaford, Jaimi Reese, Kaleigh Richards, who sing, and play other parts — are of the generic shrieking, cackling school of witch-don, who chant when the going gets rough. The question of whether they’re weaving threads into a fabric, or unravelling it, is up for grabs.

In another age (and directorial concept) Danielle LaRose’s well-spoken Lady Macbeth, who has an impressively steely resolve dressed in cordial charm, would be the motivational guidance counsellor who advises a client to set a goal and then helps him achieve it. Macbeth’s ambition is grist for her pep talks when his resolve falters. The disintegration of her self-possession, in the sleepwalking scene, is a cage-rattling experience.

So how does “valour’s minion” end up so swiftly a “hell-hound,” and before intermission? Banquo, who has a playful fatherly relationship with his son Fleance (Anna MacAuley), wonders about that in Matty’s excellent performance. And Martin’s well-spoken, always intelligible Macbeth, who’s not one of the world’s natural conniving plotters, gets more and more exasperated with the way things keep getting worse and worse.

There’s a kind of panicky wonder in his report of the voice that has cried “Macbeth doth murder sleep!” It’s a striking moment: he breaks into a kind of jarring laughter at the incoherence of a world where he has to improvise at every moment. “I begin to be a’weary of the sun” has the ring of an insomniac wondering aloud what else can possibly go wrong.

Among intriguing directorial choices is the scene where Banquo’s ghost appears to Macbeth at a banquet bash at his place, a Last Supper tableau with the phantom in full view.

But the national, political repercussion of Macbeth’s declension into barbarism are a little less than resonant here. Partly it’s because the vocal heft of the cast is variable; they’re sometimes inaudible as they chatter though speeches involving the “news” of battles and and the movement of forces.

Stand-outs are Sam Jeffery as Macduff, Maddaford as a plucky Lady Macduff, and Owen Bishop as Malcolm. But the “discussion” scenes about the horrifying state of Scotland feel a bit long, meandering, and long on exits rather than urgent. You find yourself missing Macbeth and his short fuse.

The fighting, though, is anything but meandering. As choreographed by Janine Waddell, it’s visceral and wild — no Queensbury rules for medieval Scotland. LaRose’s sound score has a kind of scary weirdness about it. And the atmospheric dimness, which has the effect of seeing characters move in and out of gloom and disappear behind the church altar, casts a chill that settles into your bones. On a wooden pew, you feel your bones.