They rise again: The Malachites are back with Macbeth 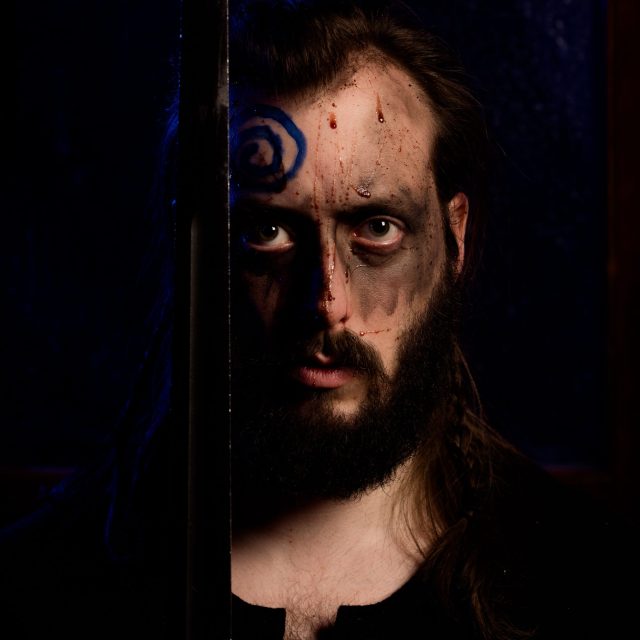 “When shall we three meet again/ In thunder, lightning, or in rain?” chant the Witches in the opening moment of Shakespeare’s fleet, dark, violent Macbeth.

Yes, Malachite Theatre, a London/Canada collective whose mission is trans-Atlantic collaboration, is back in town for the third straight January. Their Edmonton debut in 2017, a co-production with our Grindstone Theatre, was a Shakespeare history play, Henry V, rippling with ambiguities about patriotism and war. Last New Year, it was a comedy, a contradictory, multi-hued one all about turning melancholy into joy: Twelfth Night. And now, after a strange and terrible year for the great wide world — a hurly burly year, as you might say — the Malachites are taking a tragedy, “new hatch’ed to the woeful time,” into the church sanctuary they’ve occupied for their last two productions here: Strathcona’s arts-embracing Holy Trinity Anglican Church.

Macbeth, likely first performed in 1606 at the Globe, falls a bit outside Malachites’ usual territory in both time and space,. They specialize in Shakespeare’s early theatre career in Shoreditch before he and his company, the Lord Chamberlain’s Men, moved south of the Thames to Bankside, and into the Globe, in 1599.

The Malachites gravitate to unconventional venues for their work, witness their upcoming summer tour of Christopher Marlowe’s Dr. Faustus that will play medieval banqueting halls in Europe. Casting in both Canada and the U.K. is slated for February. Meanwhile, a play with a murderous usurper hero and a wife to match — not to mention a legendary curse that rains diverse disasters on  performers and audiences alike if they say the name aloud in a theatre — is a rather startling choice for a church. Even by Malachite standards. But, as Malachite director Benjamin Blyth points out, with a smile, it was Holy Trinity’s theatre-loving Father Chris Pappas (who, incidentally, appeared as a priest in Twelfth Night) who suggested the Scottish play.

Blyth, who aims to launch a more formalized trans-Atlantic training program for actors, has set his Malachite Macbeth in medieval Scotland: “Macbeth will not be texting his thoughts to the Witches or some such!” And the church has an otherworldly  resonance that’s an asset under the circumstances, he thinks. “A supernatural performance space lends itself to the sense of interacting with heaven, or hell….” And as the Witches testify  with their predictions, “there’s an ethereal presence  through the piece that constantly reminds us that our actions may not be our own.”

In productions of the Scottish play, the Witches have brought many a directorial concept to its knees, whether they’re cast as cackling crones, seductive sirens, or wispy modern dancers. In the Macbeth we’ll see starting Friday, they’re Norns, the spinners of fates in Norse mythology. And while they’re “present in the space” (much of the production’s music is their department), they “can’t be seen by the characters (Lady Macbeth hears them only as echoes)” Says Blyth, “they reflect the interiority of their minds.”

“Their prophecy sits in Macbeth’s head and comes back at inappropriate moments to tell him things.” The motif of weaving, spinning a life from a series of choices, is central to the storytelling of the Malachite production, says Blyth, who teaches Shakespeare at the University of Calgary when he isn’t in England.

The origins of Malachite’s bi-continental initiatives can be traced to the connection between the stars, Byron Martin and Blyth’s Canadian wife Danielle LaRose (as the murderous Macbeths). The pair met in the Grant MacEwan musical theatre program, and trained in Glasgow together after that. For the amazingly versatile (and busy) Martin, Grindstone’s founder and artistic director, and an improviser of note, there’s no creeping in of this petty pace from day to day. This past year he launched the Grindstone Comedy Club & Bistro in Strathcona — on time, on budget. It caught on immediately; there are shows there six nights a week.

LaRose “has been wanting to do this play for years!” Blyth confirms.  “Danielle and Byron work so well together; they’re known each other so long.…Such a joy. And (he pauses, and laughs) terrifying! I believe they could kill an old man. I think I’ve seen my own death!” 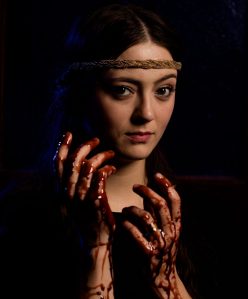 The cast includes a cluster of Edmonton actors (Martin, LaRose, Colin Matty and Samantha Jeffery among them) who have appeared with Malachite before. As with Blyth’s previous Malachite productions here — including the country’s first female Henry V and a female Malvolio in Twelfth Night — gender lines are boldly crossed in Macbeth. Jeffery plays the warrior Macduff. “The point,” says Blyth, is that it’s traditionally a hyper-masculine role, and I’m trying to get at the roots of the story.”

Macbeth isn’t some military superhero, Blyth argues. He and his best friend Banquo “are on a level playing field, of equal standing at the start. Then chance is kind to one, and not to the other… What does it mean when your best friend get promoted? Is it at your expense?”

Macbeth, says Blyth, is “one of those plays that suffers a little from cliché performances. I’ve been trying to think of ways of humanize the characters and re-claim the political intrigue, while still in the medieval context…. We’re not dealing with fairy tale characters. Macbeth could be anyone. So what does that mean for us to be on that journey with him?”

As in Shakespeare’s own theatre, lighting and sound technology is sparse at the church. Which explains why the Malachites lean into live music as much as possible. Now he’s investigating smell. Last year’s Twelfth Night filled the church with the scent of evergreen . “For Macbeth, maybe heather?”