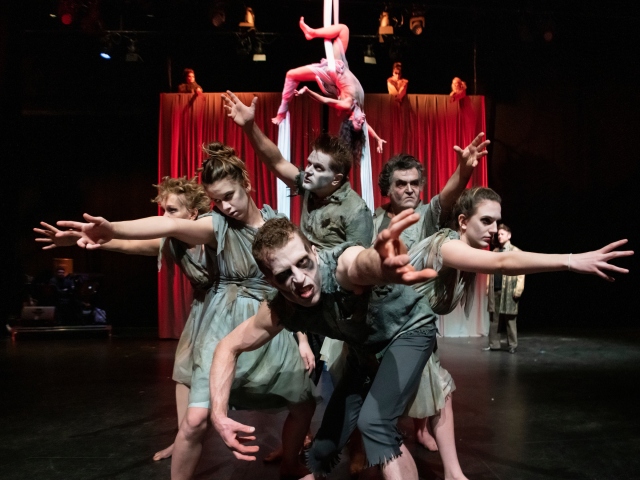 That’s what Jocelyn Ahlf and Belinda Cornish have been wanting to do for years. And now they have.

Firefly Theatre’s 14-performer workshop production of Inferno, that takes to the stage, and also the air, starting Thursday, is their theatre/circus re-telling of the first (and liveliest) part of Dante’s epic 14th century poem The Divine Comedy.

Hell has always tickled their creative fancy, as the pair explain mid-rehearsal last week at the Westbury. “Fifteen years ago we were thinking about … hell,” says Ahlf. “We thought  sketch comedy first,” laughs Cornish turning to her creative partner. “And then we thought we might as well go to the source, the classical version of hell,” says Ahlf.

“That’s the way our brains work, not very earnestly,” says Cornish. Ahlf concurs. “If we’re going to find darkness we do it through levity.”

Exactly. I’m thinking about Hump, Ahlf’s very funny chronicle of a community theatre preparing to do Richard III (it starred Cornish as the winter-of-our-discontent mass murderer). Cornish is thinking about “the closing night of Paradice City,” her repurposing of the hard-driving Guns N Roses repertoire as chipper musical theatre. “We sat around a fire with the RibbitRepublic boys (a male collective) reading Dante’s Inferno,” she says, as if this were a traditional campfire activity of an Alberta summer night.

Time has passed. Ahlf and Cornish, actor/playwrights both, are no longer in their mid twenties. “Now I know what real hell is,” grins Ahlf, who’s juggling full-time university, with theatre, with kids, with the voice-over studio she runs with her husband. “I didn’t understand then what real suffering is….”

“When you’ve lived…” says Cornish, the artistic director of Bright Young Things (and star of that collective’s recent Fallen Angels), trailing off. “There’s no way we could write then what we’ve written now!” declares Ahlf decisively.

In formal terms, The Inferno as sketch comedy isn’t a completely outlandish notion: Dante’s nine circles of hell “as set pieces in a kind of vaudeville,” as Cornish puts it. But what then of the narrative, Dante’s quest, his journey led by Virgil (of The Aeneid fame) through hell and beyond to find his lost true love Beatrice?”

Finding a contemporary context for a complicated medieval, and very Catholic, cosmology full of pop-cultural references of 1300, wasn’t easy. “At 25,” says Ahlf ruefully, “we would have said ‘wouldn’t it be funny if it was an office and some bureaucrat had to fill out forms for all eternity?’”

“We were looking for a modern context that would make sense,” says Cornish. “And it makes no sense to keep references to people who were semi-famous at the time….” Spot quiz: how many of you smart-pants remember Count Ugolino and Archbishop Ruggieri, who get big placement in the icy ninth circle of hell? Punishments were tricky, too. Damning imprecations against heresy, or  suicide, don’t have the same traction these days, to say the least.

In their adaptation, heretics are human plinths, with heads on top, “like Beckett’s Play,” says Cornish. “They’ve spoken against truth. Out of malice, to promote their own ends. Fake news.” Says Ahlf, “we’ve sucked the Catholicism out of The Inferno,” says Ahlf. “We tried to find a way to address suicide without passing judgment…” says Cornish.

Another inspiration for the pair was The Gates of Hell, a group sculpture by the French artist Rodin depicting Dante’s Inferno. “We used that a lot,” says Ahlf.

“We’re amazing,” laughs Ahlf, “but we have only the skills we have.” And Inferno “needs to be more, more theatrical, than people standing talking,” says Cornish. Setting Dante in motion cried out for a context, like circus, where “gravity doesn’t operate,” says Cornish, who’s stepped in to play one of the airborne Furies, who swoop down to snatch the damned and carry them off to hell. 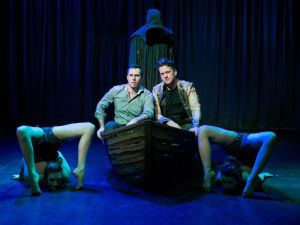 Hell is other people, argued Sartre in No Exit (produced, incidentally, by Bright Young Things at the 2017 Fringe). Wrong wrong wrong Jean-Paul. He was definitely not talking about theatrical adaptations of Dante, where a pooling of other people’s talent is what it takes to make the Fire Demons fly or the Furies swoop or The Wrathful contort.

“This is totally different, so awesome,” Ahlf smiles. “We are very aware that our contributions are a small part of telling the narrative…. We’ve said ‘this is the story’ and handed it over to Annie (Annie Dugan, artistic director of Firefly) and Christine (choreographer Christine Bandelow). And the talking and the aerial (stuff) happen at the same time.”

Hell is complicated, theatrically speaking. There’s original music, underscoring and three songs, by Paul Morgan Donald. The collaborators got to the eighth circle, and discovered that there are 10 categories of the fraudulent, with specific punishments for each in 10 ditches. “So near the end! What to do!” they cried. So Morgan Donald wrote a patter song “about these hideous, terrible people, very Mel Brooks” to encompass the lot. “We tried to balance the serious and the comic,” says Cornish.

Dugan’s cast for the journey through hell includes actors who keep their feet on terra firm, actor/aerialists like Cornish who don’t, very game thesps (like Mat Busby, who as Virgil leaves the ground clutching an umbrella, like a medieval Mary Poppins) venturing into circus for the first time. There are aerialists, acrobats, contortionists, dancers, a small cute dog….

And yes, you will see actors throwing caution to the wind and walking on rolling balls. Cornish and Ahlf feel that they’re doing the same. “It’s not small-scale; that’s the luxury,” says Cornish. “We wrote it for a cast of 400 and budget of $40 million. So this requires ingenuity…. What will people think? I haven’t ANY idea! Really!”

“I think people will be delighted! It’s weird!” says Ahlf. “Weird and scary and gross and thoughtful….It’s going to be entertaining.” Cornish nods. “If you’re going to do hell, it had better be fun. We’re living the life of anticipation….” Words to live by.

The production that runs through Jan. 26 is a Firefly workshop. Look for the full production two years hence.

Tickets: at the door.