The collapse of the blue-collar dream: Sweat, Lynn Nottage’s Pulitzer Prize-winner, comes to the Citadel

“They don’t understand that human decency is at the core of everything. They squeeze us like a sponge, drain every last drop of blood out and then throw us away.”

In the Pulitzer Prize-winning 2015 play that opens Thursday at the Citadel, you’ll see friendships disintegrate along with the long-held belief in the social contract that says, without spelling it out, that we’re all in this together. In a time of economic stagnation, viable blue-collar jobs and a righteous sense of identity are vanishing into the ruthless no-man’s-land of corporate profit margins. And rage and disappointment — the kind that helped propel Trump to the White House —  are on the rise.

Sweat, by the star American playwright Lynn Nottage, is inspired by her two and a half years interviewing residents of the dying rust-belt town of Reading, Pennsylvania, which went from thriving to one of the nation’s poorest when its steel factory closed. A dwindling industry, a loss of work, economic tension…. It has a familiar ring in the here and now.

Amongst the regulars at a steelworkers bar, who gather after their shifts to chill, to bitch, to console each other and themselves, stress fractures are appearing. The easy solidarity of the place is shattered when one of their number, Cynthia, an African-American, is promoted from the shop floor to supervisor, over the head of her best and oldest friend Tracey, who is white.

Marci T. House and Nicole St. Martin, who are Cynthia and Tracey in the Vancouver Arts Club/ Citadel co-production directed by Valerie Planche, met up this week for lunch to chat about their roles in a play that seems more topical every day. Since Sweat rehearsed and ran in Vancouver before Christmas, the pair have lived with their characters long enough they refer to them in the first-person.

“The tension is really amped up by that promotion,” says the Vancouver-based House, originally from Chicago, who plays Cynthia. “There we are, living our lives, crushed by the same forces … and then one of us is promoted and the balance changes, and friends wonder where loyalty lies.”

Cynthia applies for the supervisor job because “I want to be a ‘white hat’; I’ve always wanted that job. And I argue that ‘it’ll be good for all of us’ if I get it.” Of Tracey, St. Martin says “I just wants to put in my years, as in prison, then retire at 55….”

For Tracey “it’s a betrayal” when her friend applies for the promotion, and she burns with a sense of injustice when Cynthia gets it. Inevitably, the race card, with its affirmative action fine print, gets played. House says “The ‘Haves’ continue to have as long as the ‘Have-Not’s are at each other’s throats.” 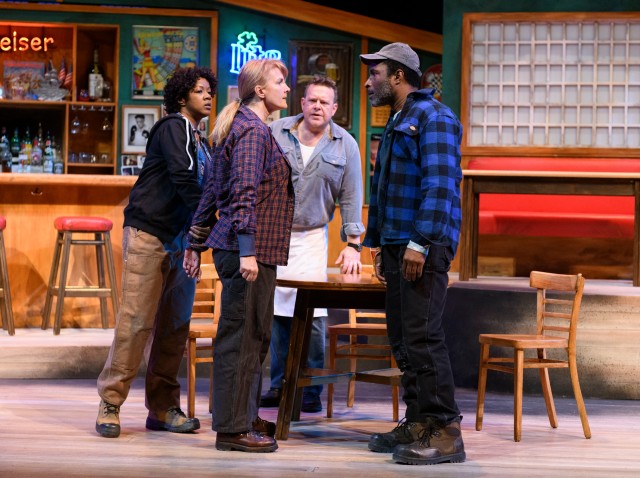 Like their friends, Cynthia and Tracey have devoted the better part of their adult lives to the plant, which is now in danger, according to management, of moving to Mexico. Or closing. Or is that a management strategy to squeeze out salary and working hour concessions?

Writing in the New York Times in 2015, Nottage called it the De-Industrialization Revolution. It “changed the American narrative,” she said of the dream where working hard pays off, and reaps loyalty.

At audience post-show talkbacks during the Vancouver run of Sweat,  St. Martin was asked “how do you get that rage every night?” House laughs at this. “You turn on the television…. It’s not hard; are you not paying attention to what’s happening in the world?”

House, who deems Nottage her “favourite playwright,” has a bond with her work.  She’s been in Canadian productions of Nottage’s Intimate Apparel (a story of a black seamstress in turn-of-the-century New York) and Ruined (about Congolese women during a civil war). Sweat, which House saw in its 2015 Oregon Shakespeare Festival premiere, is her third Nottage play. “I championed it to the Arts Club…. I saw how important it is to the current political dialogue!”

“I think I have a visceral connection to everything (Nottage) writes,” says House, both “as an artist of colour and as a playwright on the international stage…. I understand her stories — small stories particular to the African-American experience all the way to Africa, like her latest play Mlima’s Tale (about the illegal smuggling of ivory).”

In Sweat, NAFTA is a barbed term for workers under the threat of factory closure or re-location. For House it has a particular resonance. “I’m a product of NAFTA,” she says. She arrived in Canada 13 years ago, from a stint in L.A., on a NAFTA work visa. House is a rare example of an architect/actor: “I call myself an architress,” she smiles.  As a kid in Chicago, House acted, in regional and community theatre; she designed her first house at nine, and her dad actually built it.

Growing up on the South Side of Chicago, “I got to see the reality of what happens when an industry fails,” she says of watching her uncles struggle in that culture. “GM, Ford, Western Electric … I saw entire communities decimated when the plants went down. I saw the devastation of schools closing down, homes getting foreclosed.” At 21 and without a college education, her youngest uncle, now in his mid-60s, was working at a factory, making $60,000 a year. Serious money.” As she points out, these jobs are blue-collar in terms of education, but middle-class in terms of income.

For her part, Montreal-born St. Martin, who arrived in Edmonton from Toronto four years ago with her director husband (Michael Bradley) and young son, “lived through my dad, at 62, losing his job in the recession here…. It was devastating to my family.”

In one Arts Club talkback, St. Martin was asked “is education key?” She says “I had to say No…. My dad was highly educated, multiple degrees and certifications. At age 62 what do you do? Nobody wants you because you’re worth too much…. Experience is expensive.”

In the process of packing up a storage unit of stuff to move here from Ontario (Bradley got a master’s degree in directing at the U of A), St. Martin discovered an old cheque book. It revealed that as a teenager at the time, she’d given her parents money. The sense of that humiliation for her dad, “to have his teenage daughter forking out,” has never left her.

When she read Sweat and “was blown away,” St. Martin, who considers Nottage “a genius playwright,” was struck, she says, by the way “people tie their identity to what they do, the company they work for….” That bond is not reciprocal. “I have no loyalty to the company,” she says in Tracey mode. “Our value (to it) is the money we make for them….”

It takes place in a real American city, Reading, Penn. But in the end how exclusively American is Sweat? Both actors consider the question, and dismiss it. House, who weaves TV and film gigs into her theatre life in Vancouver (“there’s more sense of community in theatre, more opportunity to shape a career”) points out “it’s only set in the U.S.”; it speaks to the Canadian experience too, witness the closure of GM’s Oshawa plant. Ah, and Alberta….

“The more specific it is, the more universal,” says St. Martin, who’s happily ensconced in the Edmonton theatre community, as audiences here have reason to know (Anxiety, Do This In Memory Of Me, an upcoming indie production of Richard III with Le Fixe). House concurs. If it’s particular, “people will see themselves in that.”