The Cardiac Shadow, a multi-disciplinary exploration of human resilience at Northern Light “We were the thermometers of these men. The mercury was in our veins, rising and falling with every heartbeat. Our bodies measured the temperature of death.”

In the play the opens Friday in the Northern Light Theatre season, you’ll meet four women selected for a extreme-temperature science experiment in calibrating the fine line between life and death.

The women, prisoners of Ravensbruck concentration camp, are made to lie, naked, with Jewish male prisoners who’d been immersed to the point of death in tanks of ice water. Can they be resurrected by the pulse of human contact? Can the life force be passed on?

It’s not just a terrifying hypothesis. Chillingly, The Cardiac Shadow, by the American writer Clay McLeod Chapman, is based on a true story; the so-called “Cold Conference” is a historical footnote, a short paragraph in the long horrific archive of Holocaust atrocities. “It gives voice to the voiceless, the women,” says director/ designer Trevor Schmidt, who’s fashioned a multi-disciplinary production — in partnership with The Good Women Dance Collective — from the four inner monologues, prologue, and epilogue of the piece.

Schmidt discovered the script — which has had only one public reading ever — a decade ago online. By one of those coincidences that seem to fuel theatre, he met up with the playwright — who’s since left theatre to write youth novels and Spiderman comics for Marvel — in Edmonton. In 2008 and 2009 McLeod Chapman brought The Pumpkin Pie Show, a selection of his monologues, to the Fringe.

In typical Northern Light fashion, Schmidt has taken a script of some dozen pages, which doesn’t specifically call for dance, and extrapolated creatively with his collaborators.

“The first part of the show is a 12-minute film (created by Katrina Beatty of Loud Whisper Production), with the doctor (SS Second Lieutenant Dr. Sigmund Rascher) as a recorded voice-over (Vance Avery).”  The women’s monologues are delivered in voice-over by a quartet of actors: Nadine Chu, Elisa Benzer, Rachel Bowron, Megan Dart. And the stage belongs exclusively to dancers, a quartet from Good Women Dance. They’ve created movement, and dance to the voice-overs and the Dave Clarke score.

“Dave’s way into the show was that it was a musical piece,” says Schmidt. “Each woman is attached to a particular instrument, cello, violin, drums, piano, as leitmotif.” And the music, largely from the ‘20s and ‘30s, “has informed what we’re doing with set design.” 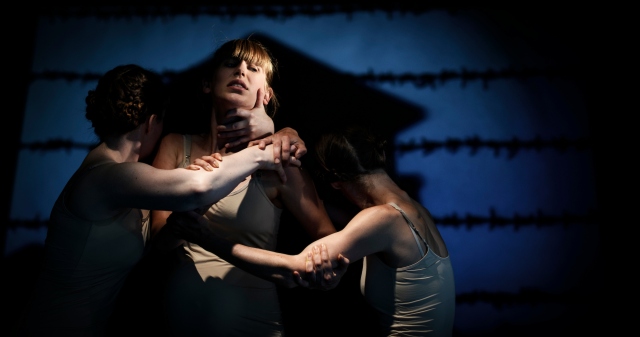 Schmidt, potentially a career dancer himself till a serious injury at 22 (“my body gave me the hint”), was attracted to dancers as the live performers for his production. It is, after all, as Good Women’s Kate Stashko says, “about the body, and its reactions. Can it be done, passing on the life force? And who gives it back to you? How do you keep a little for yourself?”

“You could have actors just stand and deliver, of course,” Schmidt says of the production possibilities he considered. “But I didn’t want the man onstage; it’s not about him…. I think the women have to be bodies. I wanted to see them as real women (not film images). And I wanted to see them move….” He’s dressed his live cast in flesh-coloured costumes: “it’s the idea of columns of flesh; they all appear to just be skin.”

Stashko plays Anna (to Anna’s voice-over, actor Rachel Bowron) who escapes the extreme duress of imprisonment to her thought haven, memories of music. The play, Stashko thinks, is not about the graphic detail of torture, and “more about resilience…. How do you get through it? how do you muster that? what do you cling to at your lowest moments?”

Dancers are used to creating from set pieces of music; it’s what they do. But in creating a movement-scape for Anna, Stashko has found herself thinking about what it means to be a dancer in a theatre production where the characters are also voice-overs. The separation of voice and body is tricky. “You have to think how much is needed, so you’re not over-riding the text. How to support and give some visual information, without so much that people don’t hear the voice…. If there’s too much, visually, the lines don’t land.” The dancer is devising how to move, and also “when to be still, to let a line arrive, ” she thinks. “It’s all about the phrasing.”

Putting dance and theatre together in a multi-disciplinary enterprise, says Stashko, is about “the abstract vs. the literal. The aesthetics (of the two) are different. And it’s a challenge to communicate. Your languages are different, and so are your audiences — the amount of information they want, and need….”

Stashko, who recently returned from dance workshops in Israel, was surprised a bit  at her “strong emotional attachment” to The Cardiac Shadow, beyond the more universal revulsion at the Holocaust. True, her grandfather was Jewish, but there wasn’t much in her upbringing to reinforce a Jewish heritage. The Cardiac Shadow and her reaction, she says, “reminded me that people store things in their bodies.”

For his part Schmidt was struck by the collaborative way the Good Women work — and their capacity for mutual positive criticism. It’s not like theatre, he says. Stashko smiles at this. For one thing, “dancers are good at taking criticism,” she says. “Not necessarily a good thing but that’s the way it is in the dance world.” And, second, “we’re a collective. We build everything together. So we’re obligated to take information (from each other) and make everything better. That’s what we do.”

“Your strength and technique and stamina are incredible, all of you,” Schmidt says to Stashko. “You’re athletes as well are artists….”

Working with these women has been amazing for me,” says Schmidt, a little wonderstruck by the lack of ego in their way of creating. “It’s so different than in theatre…. Kate says she needs to generate movement for her part. So they all listen to two minutes of music, and everyone goes off to a different part of the studio and creates dance. Then they all come back, and Kate says ‘show me what you’ve got’.”

“I think this play is going to be really rich…. It’s multi-disciplinary in a way we don’t see very often.”