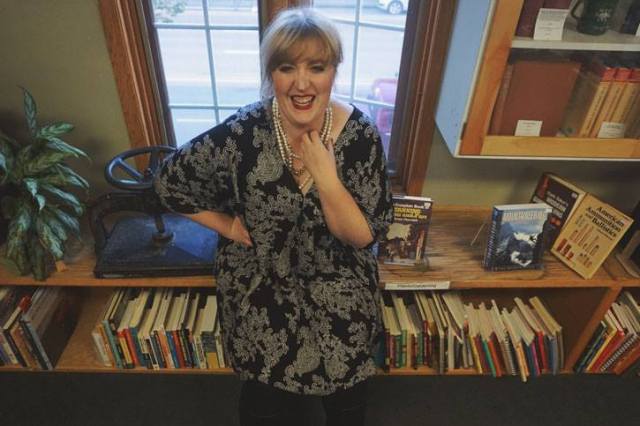 The centrepiece of Northern Light Theatre’s upcoming season, announced Saturday, is a new play by one of Edmonton’s most unusual artists. Ellen Chorley, the director of Nextfest since 2016, is an award-winning playwright, actor, director, dramaturg, teacher/mentor. She’s also a producer, a curator, a former artistic associate at Northern Light — and the multi-track founder of both a kids’ theatre (Promise Productions) and an experimental burlesque theatre troupe (Send In The Girls).

No one has a range of credentials quite like Chorley’s. With Everybody Loves Robbie, premiering in Trevor Schmidt’s Northern Light production next January (10 to 25), Chorley is poised to undertake a further expansion. Schmidt describes the play as “a love letter to Edmonton, to Edmonton theatre, and to everyone who was ever in musical theatre or a high school drama club.”

Everybody Loves Robbie started life as a 10-minute three-person scene at the Loud ’N Queer festivities a few years ago. “Heartbreaking and screamingly funny,” says Schmidt, who directed it. This new full-length two-hander version, suggested by Northern Light general manager Gina Moe, is “funny, raunchy, and truthful, a great story about a young woman in musical theatre in high school.”

He summarizes. Chloe loves Robbie; everybody loves him. “They’re a theatre couple; they’re Tony and Maria (in West Side Story); they form a drama club in Grade 10. They go to prom and the one-act festival together. They go to Limelight North,” a fictional version of Alberta’s venerable Arts Trek.

“And then suddenly Robbie thinks maybe he’s gay. And then Chloe thinks ‘maybe I’m gay too’. And she just goes off the the rails…. ‘Whether I’m gay or straight, it’s all OK’, she says. ‘But I just wanna know what I am’.”

Richard Lee and Jayce McKenzie co-star in Schmidt’s production, as the young couple, plus the characters who surround them — drama teachers, coaches, roommates.

Northern Light’s three-production “Confessions and Obsessions” season of plays by female writers opens Oct. 18 to Nov. 2 with a cabaret, and a bloody one. Baroness Blanka’s Bloodsongs  is, says Schmidt, “a one-woman accordion musical, I’m not kidding you. It’s bizarre. It’s crazy.”

In the play, by the South African-born Australian Joanna Weinberg, the protagonist has been obsessed with blood since “a childhood incident,” as Schmidt says vaguely. We’re in a cabaret setting, “a gathering of fellow addicts.  As with every addiction, the ante keeps getting upped: first nursing, then stealing blood from the hospital, then bathing in blood. Our heroine visits a fortune teller, who predicts bloodshed in her future, with particular reference to Mme Bathóry, the infamous Transylvanian countess who’s a contender for the most prolific serial killer in history (she reputedly killed a thousand children and bathed in their blood).

“It’s super-funny, super-stylish, a confession that’s a really clever allegory about addiction,” says Schmidt. His Canadian premiere production stars starring Kristin Johnston (the 4,000-year-old woman in NLT’s Origin of the Species), who will be learning to play the accordian. Since the show runs through the Halloween festivities, Schmidt expects vampiric embellishments in the theatre marketing.

The last of the Northern Light trio (March 27 to April 11) is the world premiere of Confessions of a Reluctant Caregiver by the American playwright Merri Biechler. Schmidt, who has regularly brought hitherto unknown titles and writers to Edmonton audiences, discovered the play a decade ago, he says. “Now, as I approach 50, it really speaks to me, thoughts of mortality, feelings of guilt about taking care of (aging) parents….”

The protagonist, who’s already lost her mom to cancer, puts her struggling actress life on hold and returns home to take care of a dying man with whom she’s always had a thorny relationship: her father.

“This is a painful show, eloquent and beautiful,” he says. “It’s funny. Until it’s not…. People are cruel in the way only families can be.”

Curiously, Confessions of a Reluctant Caregiver has never had a professional production. But, says Schmidt, “it’s used as a training tool for doctors … to learn sensitivity to family members in hospice situations.”

The “confessions and obsessions” that link the trio of plays in the 2019-2020 lineup are all about “people losing control,” says Schmidt. “Even if it’s wrong and dangerous and you look like a lunatic, you can’t stop!”

The current Northern Light season continues March 28 to April 13 with 19 Weeks, a co-production with Azimuth Theatre.