Lend Me A Tenor: a classic ’30s door-slammer at the Mayfield. A review 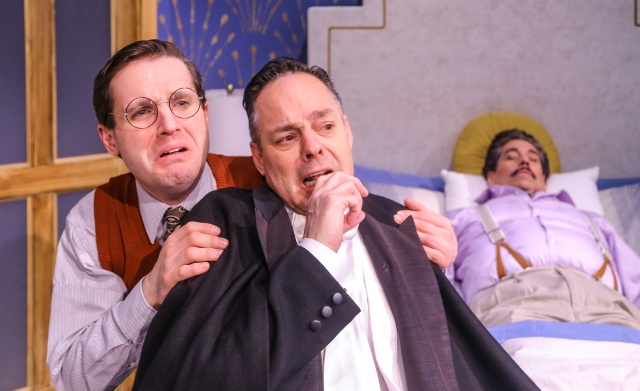 “These things happen, sir,” ventures Max, the rabbity assistant manager of the Cleveland Grand Opera Company, trying to look on the bright side.

In view of the premise of Ken Ludwig’s ingeniously engineered old-school 1986 farce Lend Me A Tenor —which involves the apparent suicide of the import star tenor and does not exclude the possible mass poisoning of the gala audience — this has got to be one of the most wildly off-the-mark consolations in the history of the arts.

The manager himself, tyrannical, doom-laden Saunders, is under no such comforting illusion. As he’s forced to contemplate his prospects, including announcing a cancellation from the stage and (even worse) returning money, he’s envisioning the grand cosmic apocalypse: a disaster “that will make Salomé look like The Merry Widow.”

He is not one to not take things personally.“Why me?” the aggrieved Saunders demands of the universe and Max. “He could have jumped out the window at breakfast tomorrow.”

In Dave Horak’s well-cast, expertly high-speed Mayfield production, this farce engine is unveiled with great comic clarity by Steven Greenfield as the mousey go-fer Max and Jeff Haslam as his operatically choleric boss, in whom the distance between crafty calculation, desperation, and explosion is perilously short.

Lingering on any of them would be a fatal exposé of their essentially preposterous cheesiness. But as charted in Horak’s production, farce inevitability (Greek tragedy minus Greeks and tragedy, but with a spoiled Italian tenor instead) kicks in, running. Soon we will see not one but two Otellos in full regalia — minus, of course, the black-face that would make Lend Me A Tenor impossible to stage these days — hurtling through the six doors of a posh Cleveland hotel suite, followed by a careerist soprano, a would-be non-virgin groupie, a panicky opera house manager, an imperious board chair, a firecracker Italian wife. And one show-stealing bellhop (Nicholas Rose).

Grand opera doesn’t consort much with ‘30s comedy in the theatre repertoire (when’s the last time you heard a Lawrence Melchior joke emanating from any stage?). So tickle your mind with this thought: twin Otellos singing Verdi full-blast. And consider the sophisticated stagecraft and timing that go into setting a terrifyingly elaborate farce like Lend Me A Tenor in motion. 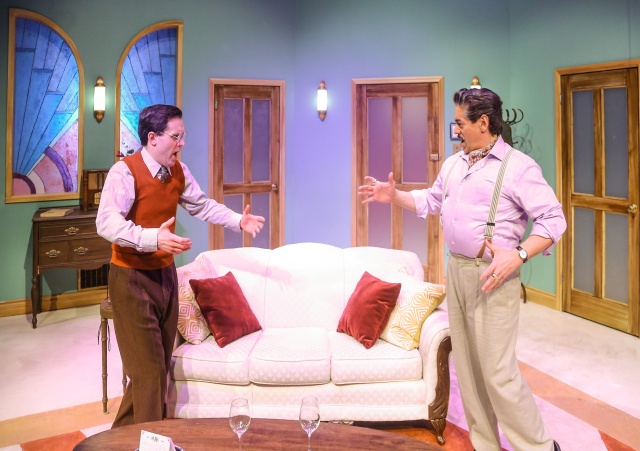 Director Horak and his cast make it happen, with well-chosen stage biz, on an elegant (and durable) period hotel room set by Megan Koshka. White-face makeup and Koshka’s amusingly goofy Italianate costumes on Tito (Vance Avery) and Max (Greenfield) are indispensable to the shelf life of the premise: the fatal intersection of two high-contrast characters who become two indistinguishable Otellos.

Rich-voiced Avery is very funny as the adored Italian divo and skirt-chaser, in whom the combination of charisma and chianti is Molotov. Greenfield, a classic milquetoast in a knitted vest, is in a state of perpetual nervous agitation, from a combination of employee terror and unrequited passion for his employer’s airhead daughter (Madelaine Knight).

Madelaine Knight and Steven Greenfield in Lend Me A Tenor. Photo by Ed Ellis.

Unexpectedly Max and Tito hit it off.  But their Verdi duet does strain credulity, in truth. The pleasant-voiced Greenfield, while capturing the sweet, amusing haplessness of a man who’s used to panicking, isn’t exactly a credible operatic impersonator, vocally. But, really, singing cedes pride of place to comic business in the production. And director Horak gives Max clever stage accompaniment, including some very funny choreography with an operatic corpse. And it’s amusing see Max rise to the occasion of adopting the flamboyant Italian-ness of the womanizing tenor. It pretty much redefines the old art saw that “it’ll be there, on the night,” not to mention all the tenor jokes you’ve ever heard. 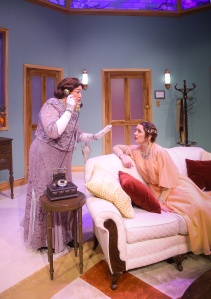 Maralyn Ryan and Madelaine Knight in Lend Me A Tenor. Photo by Ed Ellis.

Smoke, not to mention, his spleen, may well come out of Saunder’s ears, in Haslam’s very funny performance as the exasperated but wily opera company manager.  Incredulity stops time, and gets facial topography, as he grapples with the unthinkable, the news that the star attraction isn’t just taking a pre-show nap, he’s dead. The deadpan pause built into Saunder’s initial reaction to a tentative offer from Max is a corker. “His tragedy is the fate of tortured greatness, facing the black and gaping abyss of insensible nothingness,” he says of Otello, and pauses portentously. “It isn’t you, Max.”

Stephanie Wolfe as Tito’s fiery Italian wife, is a hoot, as is Maralyn Ryan as the grande dame opera dowager and board chair. The giddy ingenue role, Saunder’s not-entirely-innocent star-besotted daughter, is amusingly occupied by Knight. And Melissa McPherson is a knock-out in the blonde bombshell role of the soprano determined to sleep her way to the Met.

There’s more than a whiff of Marxism — the Groucho Harpo Chico variety — about the whole affair, as director Horak evidently relishes. And it’s nailed in the season’s curtain call, a dizzying two-minute re-cap. Verdi Schmerdi. It’s a fast and funny evening of vintage period farce.

Lend Me A Tenor