The tricky question of belief: We Are Not Alone at Theatre Network. A review 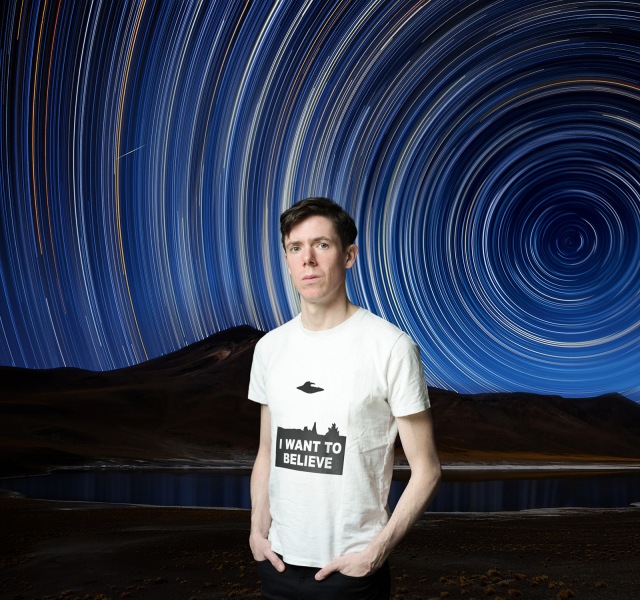 Damien Atkins, We Are Not Alone. Photo supplied.

“What am I doing here?” asks Damien Atkins more than once in the course of his smart, sly, funny solo show We Are Not Alone.

Its declared subject is one that raises either your hopes or your hackles … just depending (Atkins and his play are ready for both): UFOs, extra-terrestrial visitations and abductions, the question of whether we’re the universe’s only intelligent life, or not. Like the protagonists of Hannah Moscovitch’s plays, Atkins is expecting resistance. And he gets it off the top from his friends. “Don’t make a home down the rabbit hole,” they advise him.

Here’s a wonderland: A play about writing a play as performed by a playwright who can’t identify his attraction to writing the play in the first place may sound like a venture wrapped in so many layers of ‘meta-‘ that you’ll never be able to feel its pulse. Actually, We Are Not Alone is not like that. Not least it’s because the magnetic Atkins, one of this country’s most watchable actors, is so dexterous at populating the stage with distinct characters.

Damien Atkins, We Are Not Alone. Photo by Paul Aihoshi.

And as it plays with the idea of the interpenetration of worlds, outer and inner space and portals between the two, the show itself relishes the particular and improbable conjuring magic that is the natural home of live theatre. In a way, the play and its medium resonate in the same harmonic range.

In the first of its three “acts,” Atkins presents famous 20th century incidents and sightings, by single-handedly (and vividly) conjuring their spokespersons, their scientific and military witnesses, their commentators. In this atmospheric barrage of evidence  — the critical mass putting it to skeptics who argue that evidence is what they’re waiting for — he is assisted mightily by the inventive and ingenious lighting of Kimberley Purtell and sound designer Thomas Ryder Payne. The effects are, to say the least, strikingly persuasive. And maybe you’ll be apt to think, right then as I did, that, hey, isn’t science all about investigating (not rejecting) what’s “unidentified,” whether flying objects or strange lights?

Anyhow, In the second part, a sort of black comedy of grotesques, Atkins goes to a UFO congress in Arizona, in the company of one of his two directors (Christian Barry, of 2b Theatre Company, in Atkins’ portrait a veritable vortex of positive energy and good cheer). And they encounter a variety of “contactees, abductees, experiencers,” and an honorary Sasquatch, who’s a hippie with a long ponytail who talks amiably about portals from other dimensions.

Actually meeting experiencers is something of a setback to his proposition. Atkins is taken aback by how freaky and “seriously weird” a lot of the participants are. The downside of  supporting belief, or at least promoting reserved judgment on it, is, in a word, believers. The high crackpot content — “is anybody else here afraid to walk on grass?” — makes him squirm. And the crop-circle filmmaker woman, a raving narcissist, drives him right out of the room.

In a tour de force scene of virtuoso comic precision, vocally and facially, Atkins, bounding from chair to chair, populates an entire “experiencer” circle, mostly women and including an “experiencer psychologist.” But there’s a tiny and heartbreaking moment when one woman’s personal story of losing two children stops him in his tracks. And a desert walk in Sedona with a woman who claims to be a human/alien hybrid and her partner, a specialist in “toning” and portals, is unexpectedly emotional and haunting.

In matters of belief and doubt We Are Not Alone seems to wonder, via its appealing protagonist, whether you can hold opposing or contradictory beliefs simultaneously. The irresistible question of whether we’re unique as sentient beings in the universe — and whether that matters — hovers over this mesmerizing play. But, then, one man onstage by himself can be many people: witness the theatrical experience we’re having. In live theatre, we are not alone.

We Are Not Alone is fascination compendium of research and extrapolation in the human sphere, an exploration of belief and its repercussions, performed by a charismatic actor. We may each be, as the human/alien hybrid muses, “just a drop of water in the river.” But the river flows through other worlds.

We Are Not Alone

Written and performed by: Damien Atkins

Where: Theatre Network at the Roxy