Élise contre l’extinction totale: a new L’UniThéâtre show for and about kids – and the planet – hits the road

Anxiety about climate change and the fate of the earth isn’t the exclusive domain of adults. 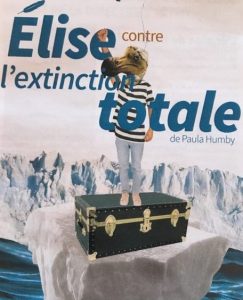 And “save the planet” isn’t vaguely theoretical, or metaphorical, or political: 16,306 species of animals are currently at risk of extinction, and the number is mounting. From the kid perspective, tuned to action and “doing,” what could be crazier, more maddening, than our collective inertia in the face of escalating threat?

The heroine of Elise contre l’extinction totale, a new and original play for kids and about kids, is in red-alert mode. In this new play by Paula Humby, premiering in a L’UniThéâtre production directed by Joëlle Préfontaine, she is desperate to find a plan of action, a project. “The end of the world” haunts her dreams; her single-mindedness threatens her friendship with Amal. And the play cuts to the chase: it engages kids via their love of animals.

In Préfontaine’s imaginative production, which got a public matinée Saturday before it hits the road, a trio of charming, high-energy performances set forth the stakes in a appealing way. The actors delighted little kids at the weekend performance that launches a three-month tour to francophone and French-immersion schools in Alberta, B.C. and Saskatchewan. By the time the tour ends, apparently, 18,500 kids will have seen the show.

As Élise, Sophie Gareau-Brennan captures the passion and wide-eyed gravitas of a character with her dander up, a 10-year-old born-again radical. It’s for Jacob Holloway and Anna-Clauric Gouandjia to populate Élise’s fraught world and her frantic dreams. They’re comical and inventive. Holloway virtually catapults across the stage (choreography by Préfontaine). As the teacher Mme Langevin, Gouandjia is riotously unhinged; the kids loved how the authority figure was continually outfaced by her enlightened charges.

The sole prop is an outsized trunk, which turns out to be an all-purpose set piece. The costumes, like the performances, are high-colour, too (design: Kerri Strobl). And Dave Clarke’s amusing sound design has a kind of perky fairy tale quality that’s constantly going awry.

Edmonton theatre’s other export of the week is Catalyst Theatre’s Vigilante, the 2015 rock musical in which the Black Donnellys hurtle towards us from beyond the grave, their grievances and their thirst for revenge unsatisfied after a century and a half.

Jonathan Christenson’s lavish production played a send-off performance this past week on the Maclab stage (unadorned for the occasion) before it took this wild true Canadian story across the country, back to the Grand Theatre in London, Ont. It’s in preview there now, opening Friday — in the heart of the place where this lurid chapter in Canuck history actually happened. The cast is riveting.

What will the descendants of the Donnellys think? Stay tuned.