Alison at three ages, and the actors who play her in groundbreaking Fun Home 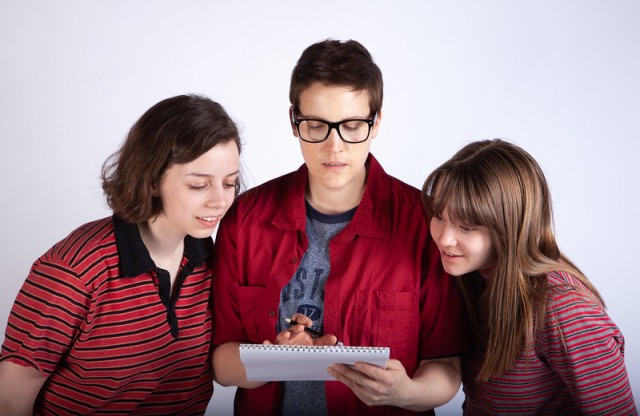 For one thing, Fun Home — which scooped up five Tonys (including best musical) in 2015 — is adapted from a best-selling graphic novel memoir, by cartoonist Alison Bechdel. And in it she’s trying to unravel the mysteries of her past, growing up and coming out in a family full of secrecy and facades, discovering she’s gay at the same time she realizes that her father was gay, too.

Alison Bechdel, that haunted cartoonist, is a character in Fun Home. Cartoonist’s pen in hand, she’s onstage drawing her younger selves, her siblings, her mother, the configuration of her parents’ strained marriage, in the quest to make sense of them, and the tragedy of her closeted father.

In this highly original musical — music by Jeanine Tesoro, book and lyrics by Lisa Kron — there are three Alison’s onstage. And 12thnight.ca had the chance to talk to the three actors who play them in the production directed by award-winning Dave Horak.

“I feel a bit honoured,” says Jocelyn Ahlf, who plays grown-up Alison at 43, looking back. “It’s an important story. And I’m playing a real person…. It’s someone’s actual personal family.”  Jillian Aisenstat, who plays Small Alison, age 11, echoes that thought. “It’s a real story!” says the 15-year-old actor in something like awe. “Not just sort of a fairy tale like many musicals. It’s by a real person.”

Actor/playwright Ahlf, a Teatro La Quindicina and Plain Janes star whose startling musical range even extends to opera, is thinking about the father-daughter relationship at the heart of Fun Home. “In a way it’s just as much about Bruce (Jeff Haslam), the tragedy of Alison’s dad,” who was fatally hit by a truck, a possible suicide, shortly after Bechdel came out, 20 years before. “Is she like her dad?” 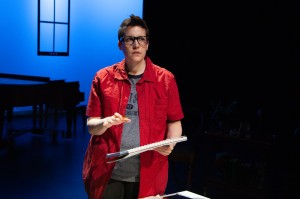 “In a way she always knew…. And 20 years is a lot of baggage,” says Ahlf of “the tragedy of a man who couldn’t be himself. He’s an English teacher who snuck around with underage boys … and he’s not a lovable dad.”

Ahlf pauses. “ Well, it’s complicated. Alison needs her dad; she really needs to have the conversation where they can say ‘we are both gay’. And it never happens.” There’s a particularly touching moment when father and daughter, a college student by then and newly out, are in the car together, and that conversation could have happened. It’s poised to happen. Alison desperately wants to happen. And it doesn’t.

Bella King, the recent MacEwan theatre grad who plays Middle Alice, is struck by the scene, too, and the delayed letter Middle Alice finally gets back from her parents when she comes out. “Her father’s response isn’t what she wanted to hear…. The anger, the pain. I can’t imagine what that would be like, to hear that from a parent.”

The heart of the story, she says, is Alison and her father “and how their lives affected each other.” King loves the mother character (played by the Janes’ artistic director Kate Ryan), too, the keeper of family secrets who knows, and doesn’t know, about her husband.

There are touchy, difficult issues at play in the musical (sex with a minor, suicide among them). But Fun Home, deemed the first in the Broadway musical repertoire with a lesbian protagonist, steps bravely up to them in “a really human way,” thinks Ahlf.

The star of the Plain Janes’ Women on the Verge of a Nervous Breakdown (“bonkers! I’m comfortable in bonkers!”) last season, Ahlf loves the Fun Home score. Her favourite song? Changing My Major To Joan, in which Middle Alison, a college student, sings about the exhilaration of first love. “It’s so romantic, so excited and active; (in that) it reminds me of She Loves Me!” says Ahlf, whose own play A Momentary Lapse, co-written with Stewart Lemoine, is part of the upcoming Teatro season. . “And it also has to be about sex. That’s the point.”

Bella King, who grew up in Winnipeg saturated in musicals (like most of the Plain Jane people), she saw her first, Annie, age four — charts the musical theatre arc that led her to Fun Home: “I loved Annie, then as I got older I was listening to Avenue Q and The Book of Mormon. Only when I went to MacEwan was it Sondheim and (the classics) Rodgers and Hammerstein….” Fun Home, which started Off-Broadway and got its Broadway premiere in a beautiful production at Circle in the Square, wasn’t a show in her radar. But once introduced to it, King was irresistibly attracted to “the music and the story, both so beautiful….” Ah, and “to the theme of memory and where it can take you.”

Aisenstat, who appears “mostly at the beginning and the end,” has been intrigued by the striking theatricality of three Alison’s: “and we’re all playing the same person!” Director Horak, she reports, has been tuning up “the small physical and emotional gestures” that remain constant in Alison at every age.

Aisenstat, a Grade 10 student at Paul Kane High, is the possessor of a startlingly long resumé that includes TV (Caution: May Contain Nuts, Tiny Plastic Men), stage work (16 St. Albert Children’s Theatre productions, most recently a starring role in Tuck Everlasting) and improv comedy (The Kidprovisers). She’s used to playing playing younger characters. Especially 10-year-old boys, as it’s happened, like Ralph in A Christmas Story and James in James and the Giant Peach.”

Small Alison, a tomboy who resists her dad’s exhortations to wear a dress, is a welcome change. Playing younger is about “subtle changes in mind,” Aisenstat says. “I tend to stay on the balls of my feet more. Kids are always ready to go. Everything’s faster; kids are so curious.. You don’t worry when you’re nine to 12. The world is yours.”

All three Alisons are finding Fun Home a special experience, well outside the realm of chin-up musical fantasies. “It’s a grown-up musical,” says Ahlf. “It’s a show that’s a heart-changer.”