Nun but the brave: for your theatre habit, a grand assortment on E-town stages this weekes this week

What is it with all the nuns on Edmonton stages this week? It’s a bumper crop, second to nun.

In The Candidate at the Citadel, you will see two different heavenly examples, (in a sense three) of nun drag. To anticipate your inevitable question, there is a pregnant nun, and a lot of nun puns. (There’s also a drag queen nun, and a desperate political intern-in-nun costume nun; forget I told you that, it’s part of the plot.)  May I just say that the Catholic Church lost a considerable amount of traction in musical comedy and farce when nuns stopped wearing that long black regalia, so convenient for disguises?

Anyhow, the very funny seven-door farce that is The Candidate is one of two Kat Sandler political comedies running simultaneously in two different theatres with the same cast (just thinking about the second-to-nun logistics makes your brain hurt and your Fitwatch explode). The other is The Party — which is one! —  in the Rice. Are there nuns there, too? Nun of your beeswax.

Check out my 12thnight.ca REVIEW of The Candidate and The Party here:

You just can’t expect to go the opera and see nun drag; you just have to savour it when it happens. In Rossini’s Count Ory — which you also can’t just expect to go to the opera and see any old time — you are treated to the mesmerizing sight of 14 chevaliers dressed up as nuns drinking wine they’ve stolen from their host who’s off fighting in the Crusades  (oops sorry, that would be part of the plot).

This highly unusual experience comes courtesy of Edmonton Opera, and Brian Deedrick’s wildly colour-drenched production (lit in dazzling fashion by Narda McCarroll). Believe me, the nun frocks are the only black-and-white feature of the evening. The nun millinery designed by Deanna Finnman is riotous; the nun ensemble looks like a giant meringue about to levitate.

Count Ory, apparently, hasn’t been staged in Canada for, oh, a couple of centuries. So don’t blow your chance, last performance Friday. Tickets: 780-429-1000 or edmontonopera.com.

At the Mayfield (opening Friday), it’s Sister Act. In the rockin’ 2011 Broadway musical spun from the 1992 Whoopi Goldberg movie, an aspiring disco diva in ’70s Philly takes refuge in a convent when she has the bad luck to witness her mobster boyfriend offing someone. This improvised protective custody will have a ripple effect within the Sisterhood, and they’ll learn to raise the rafters. “Jump in … that’s what your spirit is for.” Sister Act runs at the Mayfield through June 9. Tickets: 780-483-4051, mayfieldtheatre.ca.

In other theatre news:

Speaking of levitation, Firefly Theatre & Circus returns to the stage, and above it, with Super$tition, their new gravity-defying circus and magic cabaret that explores prophecy, fortune, luck. The workshop production runs Thursday to Sunday and April 18 to 21 at La Cité francophone.  Tickets: fireflytheatre.com. 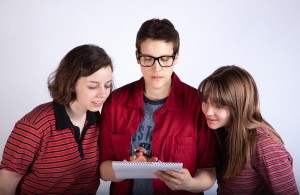 The Plain Janes, purveyors of the off-centre and original in musical theatre, are bringing us Fun Home this week. In the moving, innovative 2015 Tony Award winner, adapted from Alison Bechdel’s  best-selling graphic novel memoir, Alison is trying to piece together the mysteries of her past, the secrets of her family, her father’s life and death, and the discovery of her own sexuality. The Plain Janes production directed by Dave Horak, part of the Varscona Theatre Ensemble, opens on the Varscona stage Friday and runs through April 20. Tickets: varsconatheatre.com.

You can fly an airline where the platinum passengers don’t get to board first and put their bums in the best seats and all that. There’s no class system at Icarus Air. Slight of Mind, the latest from Theatre Yes, takes you on a flight pattern into the unknown, the nooks and crannies of the Citadel’s non-theatre spaces in three-intertwined stories. Ingenious. And moving. See 12thnight.ca’s REVIEW here.

On Sunday Script Salon celebrates their fifth anniversary of launching new scripts into the big wide world of theatre with monthly staged readings. The special epic edition features Gerald Osborn’s Hearth and Homer, “the untold story of the troubled teen years of Homer, poet of antiquity.” No nuns are involved, to my knowledge. But there is a Greek chorus, which always clutters a teenager’s living space.

Since it is a festive occasion, Osborn provides a bonus curtain-raiser, Bonobo Bacchanale, billed as a “hard-hitting documentary about the sex lives of bonobo apes.”

Showtime is 7:30 p.m. in the Upper Arts Space at Holy Trinity Anglican Church (10037 84 Ave.). But if you get there early, there’s live music and cake. Admission is free, but donations are accepted with loud hallelujahs.

And there’s the Bonfire Festival at Rapid Fire Theatre — an extravaganza of original new ideas in long-form improv thought up by the quick-witted risk-takers who don’t have to have a script to make a play. It runs through Saturday at Rapid Fire headquarters, Zeidler Hall at the Citadel.